Dolutegravir matches or surpasses other regimens for first-line HIV treatment 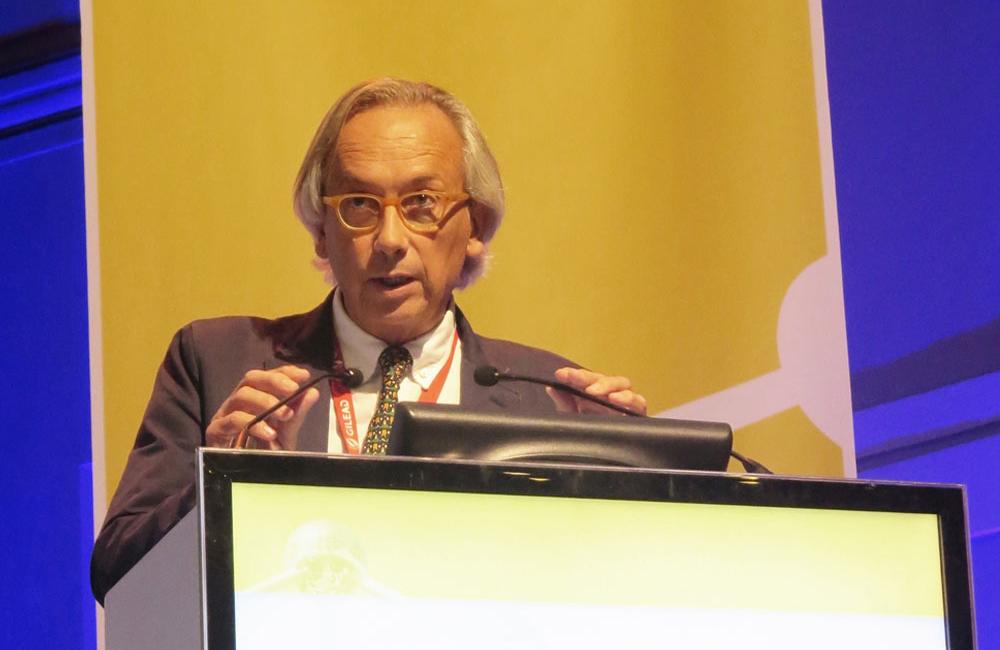 This multicentre, open-label, non-inferiority study enrolled 484 treatment-naive adults with HIV. Most participants (85%) were men, a majority were white, 23% were black and the median age was 34 years. At baseline, the median CD4 cell count was 395 cells/mm3 and one quarter had high viral load (HIV RNA >100,000 copies/ml).

Participants were randomly assigned to receive 50mg dolutegravir or 800/100mg darunavir/ritonavir, both once daily. In addition, they received investigator-selected NRTIs, with 67% using tenofovir/emtricitabine (Truvada) and 33% using abacavir/lamivudine (Kivexa).

Results from the primary analysis, presented last month at the Interscience Conference on Antimicrobial Agents and Chemotherapy (ICAAC), showed that 90% of people taking dolutegravir and 83% taking darunavir/ritonavir achieved undetectable viral load in a 'snapshot' analysis, with dolutegravir meeting the criteria for statistical superiority. CD4 cell gains were the same in both arms at 210 cells/mm3. Fewer people in the dolutegravir arm discontinued due to adverse events (1 vs 4%) and serious drug-related adverse events were rare (one vs none).

Clotet's late-breaker presentation at EACS focused on pre-specified subgroups. Dolutegravir's advantage was particularly notable amongst people with high viral load, with a 48-week response rate of 93%, compared to 70% in the darunavir/ritonavir arm. The difference was smaller amongst people with lower viral load, 88 vs 87%, respectively.

The larger difference in the high viral load strata was mainly driven by lower likelihood of virological non-response (7 vs 18%) and fewer drop-outs due to adverse events (0 vs 7%) in the dolutegravir arm.

Overall, side-effects in the subgroups were similar to those observed in the analysis as a whole, with most subgroups reporting more adverse events in the darunavir/ritonavir arm. There were no significant differences in adverse events leading to withdrawal by subgroup. Dolutegravir recipients experienced smaller rises in LDL ('bad') cholesterol. Some people taking dolutegravir had small increases in serum creatinine, attributed to the drug's effect on a transporter protein.

Based on these findings the researchers concluded,"Dolutegravir provide a potent and well-tolerated new option for first-line HIV treatment."

Dolutegravir vs other regimens

The extended 96-week analysis from SPRING-2, published in the November 2013 issue of Lancet Infectious Diseases, showed that 50mg once-daily dolutegravir had non-inferior efficacy and similar tolerability compared to 400mg twice-daily raltegravir, both taken with either tenofovir/emtricitabine or abacavir/lamivudine.

It is not practical to compare new therapies against every possible competitor, especially older regimens used by fewer people. The researchers therefore used results from the two trials that directly compared dolutegravir against efavirenz or raltegravir, along with data from 46 randomised controlled trials comparing the latter two drugs against other agents, to estimate dolutegravir's comparative efficacy. They ran the analyses both adjusted and non-adjusted for which NRTI 'backbone' was used.

They found that dolutegravir was significantly more likely to lead to viral suppression than the boosted protease inhibitors atazanavir (Reyataz), darunavir (this analysis did not include FLAMINGO) or lopinavir/ritonavir (Kaletra), as well as the NNRTI rilpivirine (Edurant, also in Eviplera). Efficacy was similar to that of the other integrase inhibitors, raltegravir and elvitegravir (part of the Stribild co-formulation). Dolutegravir was also associated with higher CD4 cell gains than most comparators.

"Overall, meta-analysis estimates show dolutegravir is comparable to or more effective than all guideline-recommended third-agent options for first-line treatment of HIV-1-infected patients," the researchers concluded.

The future of dolutegravir

In an editorial accompanying the SPRING-2 report in The Lancet Infectious Diseases, Mark Boyd and David Cooper from the Kirby Institute of the University of New South Wales speculated about how dolutegravir might alter standard antiretroviral treatment and provide more options in resource-limited settings. Possibilities might include NRTI-sparing regimens, ART without pharmacokinetic boosting and even dolutegravir monotherapy, they suggested.

In the shorter term, ViiV announced last week that it has requested US regulatory approval of a new single-tablet regimen containing dolutegravir, abacavir and lamivudine. A European regulatory application has also been submitted, according to the company. This combination, taken as separate pills, worked well in the aforementioned trials. If approved, the new co-formulation will offer the first one-pill, once-daily regimen that does not contain tenofovir/emtricitabine (as does Gilead's trio of Atripla, Complera/Eviplera and Stribild), which could be particularly beneficial for people with, or at risk for, kidney disease or osteoporosis.