Dolutegravir and raltegravir cause changes to fat cells 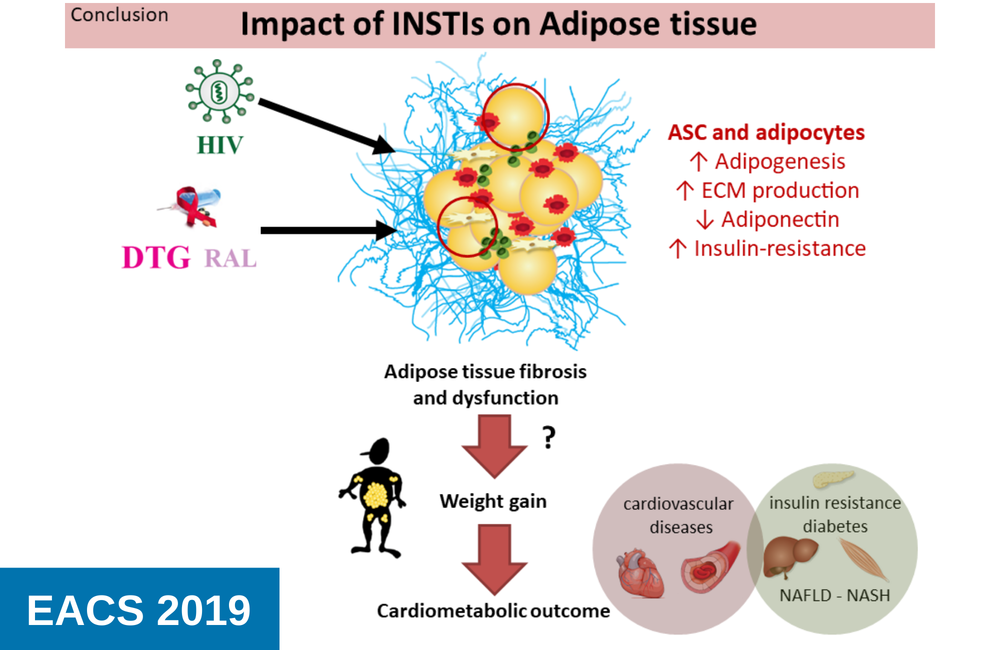 The integrase inhibitors dolutegravir (Tivicay, also in Triumeq and Dovato) and raltegravir (Isentress) cause changes in the structure of fat cells that may promote obesity, and can cause insulin resistance, studies of cells sampled from people living with HIV and monkeys exposed to the drugs have found.

The findings were presented last week at the 17th European AIDS Conference (EACS 2019) in Basel, Switzerland.

Some cohort studies and clinical trials have shown that after starting antiretroviral treatment, people taking an integrase inhibitor were more likely to gain weight and more likely to experience substantial weight gain.

However, it has been unclear how integrase inhibitors might interfere with metabolism and cause fat gain.

A French research group presented evidence that the integrase inhibitors dolutegravir and raltegravir have direct effects on adipose tissue that could promote weight gain.

The cells which make up fat tissue – adipocytes – are programmed to store fat and send signals that govern fat storage through the hormones leptin (which down-regulates fat storage by reducing appetite) and adiponectin (which governs glucose uptake by cells).

The researchers then analysed samples of subcutaneous and visceral fat from 14 people receiving either an integrase inhibitor-containing antiretroviral regimen or an integrase-sparing regimen. This group of people were all extremely obese and tissue was sampled at the time of bariatric surgery, undergone to promote weight loss.

To examine whether integrase inhibitors have direct effects on fat cells, human adipose stem cells from HIV-negative women were exposed in the laboratory to dolutegravir or raltegravir before and during the process of differentiation into adipocytes. Exposure to the drugs was associated with greater production of collagen types associated with adipocyte fibrosis and obesity.

Dolutegravir has been shown to inhibit melanocyte-stimulating hormone (MSH), which controls appetite. Lower HSH activity has been associated with the development of obesity.

Opinions vary among metabolic researchers regarding the significance of adipocyte fibrosis. Fibrosis may be a consequence of chronic inflammation prompted by a chronic excess of energy from food. It may be a critical step in the development of insulin resistance, in the view of some researchers.

But much is still to be learnt about the cellular pathways leading to obesity and insulin resistance, another French research group pointed out in 2013, indicating that these findings are preliminary and suggestive of further avenues for research rather than proof of a mechanism by which integrase inhibitors cause weight gain.