Fostemsavir, novel gp120 inhibitor, salvages nearly half of people with no other treatment options left 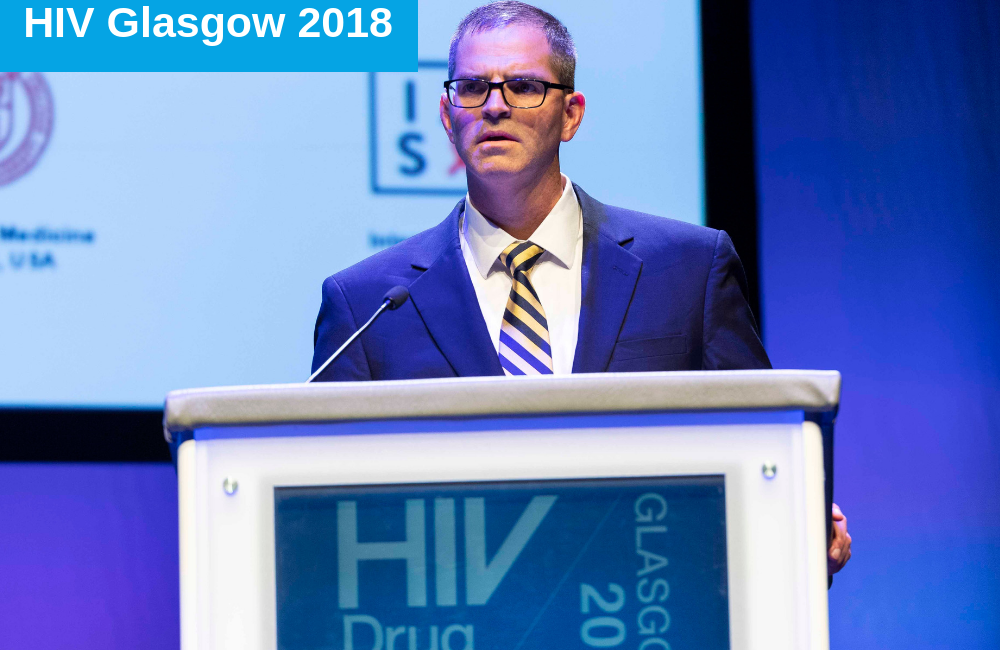 The recent International Congress on Drug Therapy in HIV Infection (HIV Glasgow) featured trials of several HIV drugs with modes of action different from the usual classes. Despite the overall success of antiretrovirals (ARVs), there remain a minority of people who, due to the development of intractable HIV drug resistance, still need what used to be called “salvage drugs”.

Two are entry inhibitors. As well as ibalizumab (Trogarzo), already reported here, the conference heard about fostemsavir. This drug, originally called BMS-663068, stops HIV from entering cells not by attaching to the CD4 receptor on cells, as ibalizumab does, or to the CCR5 co-receptor, as maraviroc does. Instead it attaches itself to the virus, specifically to the gp120 molecule, the ‘spikes’ on the surface of HIV that are the means of viral entry into the cell.

In order for HIV to lock onto the CD4 receptor and fuse with the cell membrane, the gp120 protein unfolds into a three-part symmetrical structure (a trimer). This change is necessary for it to attach itself to the host CD4 receptor. Temsavir – which is what fostemsavir becomes in the body – lodges itself into the internal structure of gp120 at the moment of its splitting apart and prevents the process of viral attachment.

Peter Ackerman of ViiV Healthcare, who are developing fostemsavir, presented 48-week results from the BRIGHTE study of fostemsavir in highly treatment-experienced people. All participants in the study were failing their current antiretroviral therapy (ART) and had viral loads over 400 copies/ml.

A molecule on the surface of some cells onto which HIV can bind. To enter a host cell, HIV binds to a CD4 receptor and a coreceptor (either CCR5 or CXCR4) on the host cell. CD4 receptors are found on CD4 cells, other types of T cells, macrophages, monocytes, and dendritic cells.

A glycoprotein on the HIV envelope. gp120 binds to a CD4 receptor on a host cell, such as a CD4 T lymphocyte (CD4 cell). This starts the process by which HIV fuses its viral membrane with the host cell membrane and enters the host cell.

BRIGHTE was split into two different cohorts according to whether there were any other functional antiretroviral drugs that could be used in an optimised background regimen (OBR) or not.

If people had one or two functioning drugs in at least two classes of ARVs that could be used to construct an OBR, then they were briefly randomised – just for eight days – to continue on their failing regimen and receive either fostemsavir or a placebo. Those receiving the active drug were thus essentially receiving fostemsavir monotherapy. After eight days, everyone received open-label fostemsavir plus the best OBR that could be constructed.

If people had no functional antiretroviral drugs left, then they were immediately put on open-label fostemsavir plus an OBR in what Ackerman said was “as much of a compassionate release programme as a drug trial.” Investigational drugs were allowed in the OBRs in this group; 15 people, for instance, were also taking ibalizumab.

There were 371 people in BRIGHTE. Ninety-nine were in the no-drugs-left, immediate treatment cohort and of the remaining 272, 203 were randomised to receive fostemsavir in the initial eight-day period, and 69 placebo.

This was a very treatment-experienced and in many cases very unwell group of people. Their average age was 49, just under a quarter were women and a similar proportion were African American.

Given these life-threatening CD4 counts, it is not that surprising that 20 people died during the study, eight in the randomised group and 12 in the immediate-treatment group.

Virtually all people had treatment experience with the NRTI, NNRTI and protease inhibitor drug classes. With integrase inhibitors, 75% of the randomised group and 95% of the immediate-treatment group had experience. Thirty-nine per cent in the randomised group and 69% in the immediate-treatment group had taken the fusion inhibitors T-20 or T-1249. Twenty-six per cent and 40% respectively had taken a CCR5 inhibitor like maraviroc.

During the eight days of randomisation, people on fostemsavir experienced an 0.8 log copies/ml drop (about a 6.5-fold drop) in viral load compared with an 0.2 log drop in those on placebo.

At week 48, in a strict analysis that defined any change in OBR as a regimen failure, a viral load below 40 copies/ml on their regimen was achieved by 54% of people in the randomised group and 38% of those in the immediate-treatment group.

Safety, in this highly experienced and unwell population, was generally good, with the most common ones being nausea, diarrhoea and headache. But 33% in the randomised group and 44% in the immediate group had to discontinue their regimen at some point.