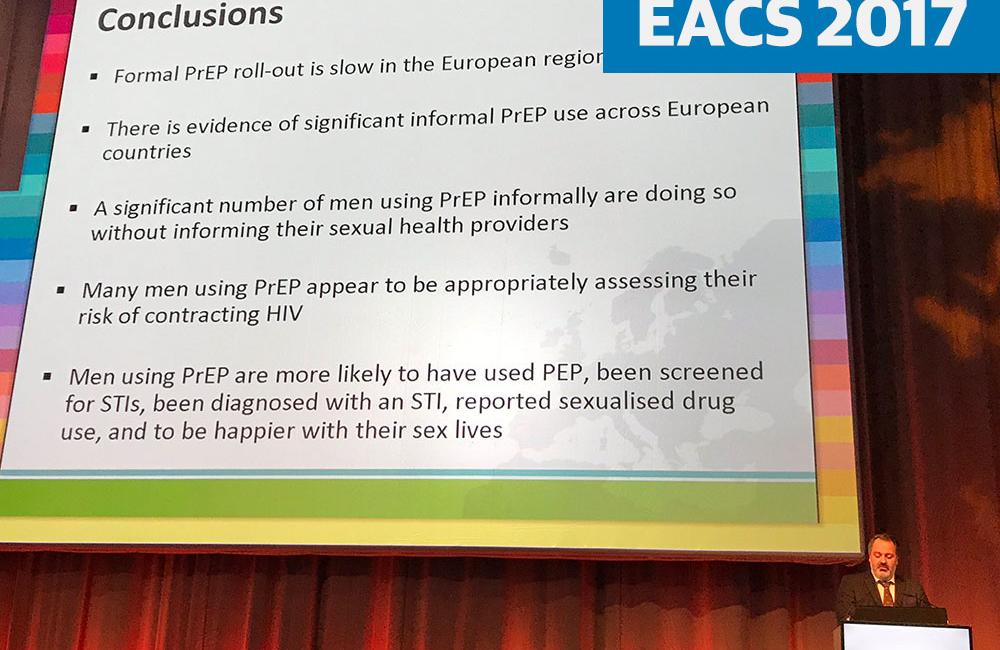 A study of men who have sex with men (MSM) conducted by the European Centre for Disease Prevention and Control (ECDC) in collaboration with the gay contact site Hornet has found that pre-exposure prophylaxis (PrEP) usage has not increased, on average, among its respondents over the proportion reported last year, when a similar survey was carried out.

The results were presented recently at the 16th European AIDS Conference (EACS 2017) held in Milan, Italy.

It found that 10% of its respondents were currently taking PrEP, though this varied from hardly any in some countries to 17% in the case of Ukraine.

Other countries where higher numbers of respondents were taking PrEP included Turkey (16%) and Sweden (15%). The proportion in the UK was the survey average, 10%, with no increase since last year.

Although PrEP usage in France was 11% and Russia was 8%, there were a large number of French and Russian replies so numerically, French PrEP users represented 27% of all those reporting PrEP use and Russians 18%.

ECDC’s Teymur Noori told the conference that the survey ran for a month in July/August 2017. Altogether 12,053 men responded, with replies from every one of the 55 countries of the World Health Organization European region.

Noori prefaced the survey by noting that although HIV infections among MSM were starting to fall in some countries, the annual number of new HIV diagnoses in MSM had risen by 16% in the last decade throughout the European Union and European Economic Area (EU/EEA: this excludes most of the former Soviet states). Diagnoses in all other groups has fallen.

Although PrEP was slowly being introduced in more countries, progress was slow, Noori said. The cost of PrEP was overwhelmingly cited as the main barrier to adopting it, with two-thirds of 36 nations in the EU/EEA mentioning cost as a principal barrier. In the face of national health systems’ unwillingness to spend on PrEP, the survey provided evidence that MSM throughout the European region were attempting to access it in other ways.

France and Russia drew the most responses to the survey, with nearly half of survey respondents coming from these two countries (23% each). The other three countries in the ‘top five’ of responses were the UK (13%), Italy (8%) and Turkey (6%).

Participants were generally young; 75% were under 40 and 28% under 25. Eleven per cent of participants had HIV, the same as in the last survey (ranging from 19% in Portugal to 7% in the UK) and 9% said they did not know their HIV status. These were excluded from the analysis of answers about PrEP. This left 10,038 men who said they were sure they were HIV-negative, of whom 1056 said they were currently taking PrEP.

Of these, roughly a third each said they had it prescribed by their doctor (36%) or bought it online (32%). The 27% of French respondents on PrEP represented the majority who said they had it prescribed; Noori said the other 9% would be partly due to new rollout programmes in other countries and partly due to physicians prescribing off-label generic PrEP in the mainly eastern countries where Truvada is not patented.

Thirteen per cent of respondents said they received PrEP as part of a study, another 13% acquired it from friends, and 5% said they got it by requesting PEP (post-exposure prophylaxis). This meant that roughly half the respondents were accessing PrEP from physicians and half were getting hold of it informally. Incidentally, 48% of those currently on PrEP said they had received PEP during the last year, indicating that it may be a ‘gateway’ to PrEP use.

One-third said their doctor did not know they were taking PrEP and thus must be presumed not to be receiving adequate medical monitoring.

People taking PrEP were in the main getting tested regularly for sexually transmitted infections (STIs); 87% (690 respondents) had had an STI checkup in the last year and 48% of them (N = 277) had been diagnosed with an STI. STI checking was pretty high in respondents not on PrEP too, with 69% (8613 men) saying they had had an STI checkup during the year and 17% (N = 975) diagnosed with an STI.

Noori commented that these figures showed that PrEP was largely being accessed by the people who needed it most, namely those at the highest risk of HIV.

Noori concluded by noting that formal PrEP rollout is still slow in the European region; that there was evidence of significant informal PrEP use across European countries; and that a significant number of men using PrEP informally are still doing so without informing their sexual health providers.