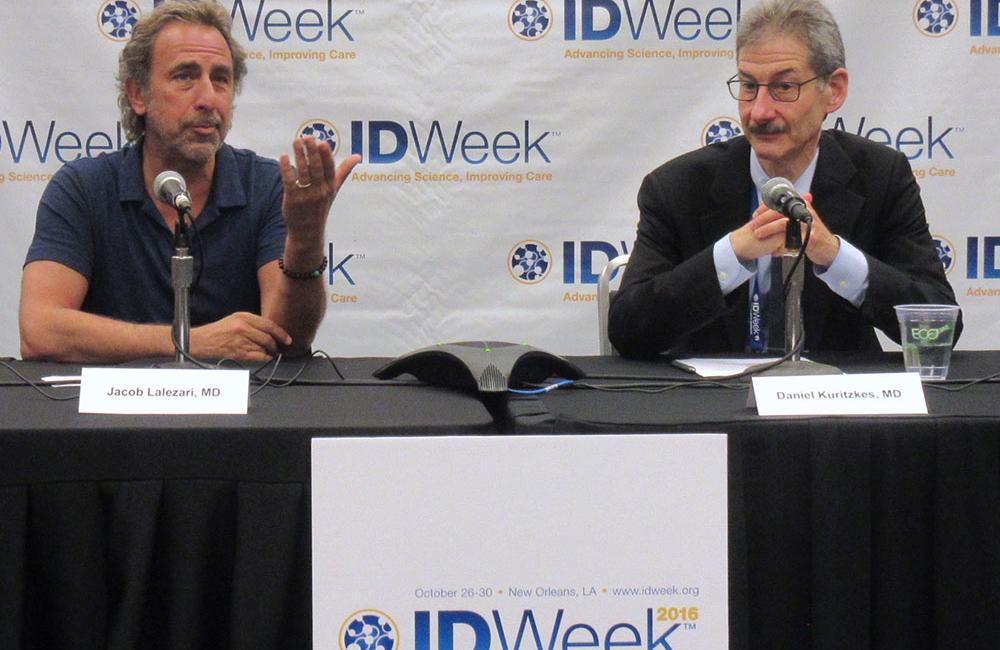 Ibalizumab, an experimental monoclonal antibody with a unique mechanism of action, demonstrated good safety and promising efficacy in a small phase 3 study of people with extensive drug resistance who cannot be successfully treated with available therapies, according to a report at the IDWeek 2016 conference last week in New Orleans.

"By and large the great majority of our HIV patients are doing fine - this is about the patients who are left behind," presenter Jay Lalezari of Quest Clinical Research in San Francisco said at an IDWeek press briefing. "This group is not large in number, but they are extremely vulnerable."

While most people with HIV do well on modern antiretroviral therapy (ART), a small proportion are unable to maintain an undetectable viral load, usually due to drug resistance. Some people with long-term HIV infection developed extensively resistant virus by using suboptimal drugs in incomplete regimens earlier in the epidemic.

Because the number of people in this category is small and dwindling, pharmaceutical companies do not devote much effort to so-called 'salvage' or 'rescue' therapy. Lalezari estimated that less that 5% of people with HIV – a number in the thousands – are in this situation.

Ibalizumab (TMB-355), being developed by TaiMed Biologics, is the first biologic drug for HIV. It is a monoclonal antibody that targets a human protein rather than attacking the virus directly. The antibody binds to the CD4 protein on the surface of T-cells, and while this does not prevent HIV from attaching to the cell surface, it blocks a conformational change that enables the virus to enter the cell.

Ibalizumab has been in development for more than a decade, previously under the auspices of Tanox (where it was known as TNX-355). Early studies showed that it has a unique resistance profile and works against HIV that is resistant to older antiretrovirals. The antibody demonstrated modest efficacy in a previous phase 2 study and was granted orphan drug status and a breakthrough therapy designation by the US Food and Drug Administration (FDA).

At a late-breaker abstract session at IDWeek, Lalezari presented findings from a small phase 3 trial evaluating the safety and efficacy of ibalizumab for people with HIV who are unable to maintain viral suppression on their current antiretroviral regimen.

The study enrolled 40 heavily treatment-experienced participants on a failing regimen. A quarter had used more than ten previous antiretrovirals. They had documented resistance to at least one drug from three antiretroviral classes – and some were resistant to most drugs in these classes. However, they were required to have at least one drug available that was still active to use in an optimised background regimen with ibalizumab. About a third had to meet this requirement by using another investigational agent, such as the attachment inhibitor fostemsavir (BMS-663068).

Most study participants (85%) were men and more than half were white. The median age was 51 years and they'd had HIV for 21 years on average. At baseline they had a viral load above 1000 copies/ml, with a median level of 100,000 copies/ml. The average CD4 T-cell count was only 160 cells/mm3, with a third having less than 10 cells/mm3. Lalezari noted that many of these people were in "perilous health."

After a six-day observation period, participants received a 2000mg loading dose of ibalizumab by intravenous infusion while remaining on their failing regimen – that is, the antibody was essentially used as monotherapy for the first week.

The researchers looked at how many people experienced at least a 0.5 log10 drop in viral load by day 14. At that point, participants switched to an optimised background regimen with at least one other active drug, as determined by resistance testing. They received a second lower-dose infusion of 800mg ibalizumab on day 21 and then every other week until the six-month mark.

Viral load had decreased by an average of 1.1 log10 by day 14 (a week after the initial ibalizumab dose). During the monotherapy period 83% of participants had at least a 0.5 log10 drop in HIV RNA, while 60% had a decrease of 1.0 log10 or more. In contrast, only one person saw a significant viral load decline during the observation period before starting ibalizumab.

"This is not the most potent drug we've seen, but it's pretty good, and in the setting of multidrug resistance it's very good - maybe the best we have," Lalezari said.

Ibalizumab was generally safe and well tolerated, with no treatment-related serious adverse events or early treatment discontinuations. The most common adverse events were dizziness, fatigue, nausea or vomiting and rash.

Ibalizumab is one of the first long-acting injectable therapies for HIV. TaiMed is also worked on a subcutaneous injection formulation of the drug, but an infusion may be acceptable if it only has to be taken every other week and it works for people with no other effective options.

While bi-weekly dosing is appealing, Lalezari predicted ibalizumab would be a niche product for difficult-to-treat people, rather than playing much of a role in first-line HIV therapy.

While ibalizumab may not have a large market, Lalezari gave credit to activists for continuing to push forward a new treatment for people who have run out of options, and to the FDA for advancing it through clinical trials.

5 FDA decisions to watch in the fourth quarter

By Dec. 27, Gilead Sciences should know whether its second attempt at getting lenacapavir, a key HIV drug approved in the U.S. has succeeded. An analyst expects the FDA to approve lenacapavir for heavily pretreated HIV patients.
BioPharma Dive
3 Oct 22
Pharmaceutical industry

Part of the company's new strategy includes shedding all pipeline projects that aren’t in oncology, HIV or NASH. That means the company will no longer be pursuing leronlimab as a potential treatment for COVID-19, graft-versus-host disease, stroke or multiple sclerosis.
FierceBiotech
30 Sep 22
New & experimental HIV treatments