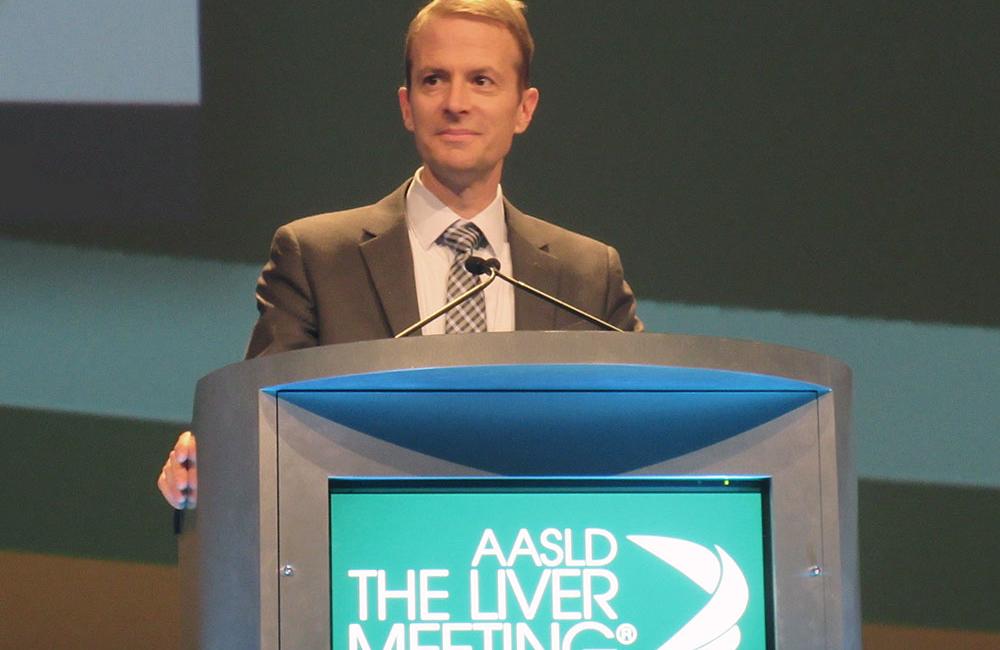 AbbVie’s pangenotypic combination of glecaprevir and pibrentasvir cured almost all of the hardest-to-treat genotype 3 patients – those with cirrhosis and/or previous treatment experience – in a phase II trial, and looks suitable for use as an 8-week regimen in genotypes 2, 4,5 and 6, according to results of studies presented at the 2016 AASLD Liver Meeting this week in Boston.

AbbVie is developing the combination of glecepravir and pibrentasvir (G/P) as a pangenotypic regimen for hepatitis C treatment, to be dosed as a once-daily pill without ribavirin. AbbVie will seek licensing approval for the combination in the United States and European Union within the next few months.

Results of two phase II studies, in most-difficult-to-treat people with genotype 3 and of an 8-week treatment course, were presented at Sunday sessions of The Liver Meeting. Further data from phase III registrational studies are also being presented at the meeting and are reported separately.

Glecaprevir and pibrentasvir in the hardest-to-treat patients

Intent-to-treat analysis showed that the regimen was highly effective. In treatment-experienced people without cirrhosis the 16-week regimen was more effective than the 12-week regimen, with 96% achieving SVR12 in the 16-week arm compared to 91% in the 12-week arm. In the cirrhotic arms 98% of previously untreated and 96% of treatment-experienced participants achieved SVR12.

In conclusion, said David Wyles of Denver Medical Center presenting the findings, G/P proved highly effective and well tolerated in perhaps the hardest-to-treat patient populations, treatment-experienced people and people with cirrhosis with genotype 3 infection who until now have had very limited options for achieving a hepatitis C cure.

Eight weeks of glecaprevir and pibrentasvir cures 97% in genotype 2, 4, 5 and 6

Part 4 of the SURVEYOR-II study examined the virological efficacy of an 8-week course of treatment with glecaprevir and pibrentasvir in people with genotypes 2, 4, 5 or 6. The study recruited 200 participants, of which 71% had genotype 2 infection, 22% had genotype 4 infection, 1% genotype 5 and 5% genotype 6. The study population was evenly split between men and women, 76% of participants were white and the vast majority of participants had less advanced fibrosis (F0 or F1 stage) (84%). Eighty-seven per cent were previously untreated.

In genotype 2 the 8-week regimen was found to be non-inferior to the historical 95% SVR rate achieved with a 12-week course of sofosbuvir/ribavirin, the currently-recommended regimen in most settings.

Wyles DL et al. SURVEYOR-II, Part 3: efficacy and safety of ABT-493/ABT-530 in patients with hepatitis C virus genotype 3 infection with prior treatment experience and/or cirrhosis. Hepatology Special Issue, The 67th Meeting of the American Association for the Study of Liver Diseases: The Liver Meeting, abstract 113, Boston, 2016.