AbbVie pangenotypic combination cures 98% or above across genotypes 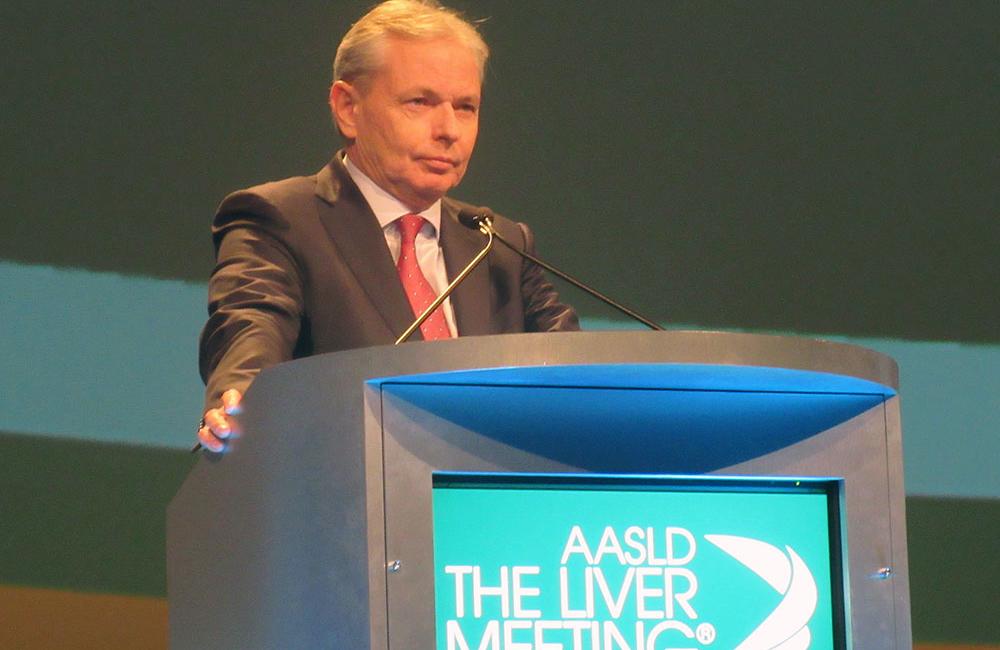 AbbVie’s combination of glecaprevir and pibrentasvir cured at least 98% of people with hepatitis C in three large clinical trials covering five out of six genotypes of the virus, and is likely to receive marketing approval in the United States and European Union as the first ribavirin-free pangenotypic direct-acting antiviral combination next year, the 2016 AASLD Liver Meeting heard this week in Boston.

In another clinical trial the combination cured almost all genotype 3 patients who were treatment-experienced and/or had cirrhosis, the hardest groups of patients to cure of hepatitis C.

AbbVie is developing the combination of glecapravir (ABT-493) and pibrentasvir (ABT-530), referred to as G/P by the company, as a pangenotypic regimen for hepatitis C treatment. The combination is dosed once daily, without ribavirin.

Glecaprevir is an HCV NS3/4A protease inhibitor active against all genotypes of hepatitis C. Pibrentasvir is an NS5A inhibitor also active against all genotypes of hepatitis C virus (HCV). Both agents are active against common variants that confer resistance to first-generation agents of their classes. Glecaprevir is more potent against genotype 3 than other HCV protease inhibitors, including products being developed by Merck (grazoprevir) and Gilead (voxilaprevir)). Pibrentasvir has demonstrated higher potency than most other NS5A inhibitors across all genotypes.

This week results of three phase III studies of the combination were presented at The Liver Meeting, including a comparison of 8- and 12-week treatment regimens in people with genotype 1 infection. The studies are code-named Endurance.

Participants were randomised to receive glecaprevir and pibrentasvir (300mg/120mg) once daily for 8 or 12 weeks. The study recruited 703 people, of which 43% had genotype 1a infection. The study population had less advanced liver damage: 85% had F0 or F1 stage fibrosis, whereas only 9% in the 8-week and 8% in the 12-week arm had progressed to F3 fibrosis. The study population was predominantly white (82-86%) but evenly split between men and women. The median body mass index in this study population was 25. Thirty-eight per cent of study participants were treatment-experienced, almost all through exposure to interferon-based treatment. Five per cent of study participants had co-infection and were predominantly receiving treatment with integrase inhibitor-based regimens.

In the 12-week arm 99.7% of 332 participants achieved sustained virologic response (SVR12) in an intent-to-treat analysis which excluded people with HIV co-infection and sofosbuvir-experienced patients. All of the 332 participants in the 8-week arm achieved SVR12 in a per-protocol analysis which excluded people who discontinued treatment prematurely or experienced virologic failure prior to week 8. In the 12-week arm one participant has not yet attended for a 12-week post-treatment visit but is not lost to follow-up. In the 8-week arm one participant experienced on-treatment virologic failure at day 29 but for reasons unexplained in the presentation, the study protocol did not count this evident failure of treatment as a failure when comparing the efficacy of the 8-week and 12-week regimens. This exclusion did not affect the overall conclusion, that the 8-week regimen was non-inferior to the 12-week regimen.

Unusually, the full intent-to-treat analysis was reported as a secondary efficacy endpoint. In this analysis 99% of the 8-week and 99.7% of the 12-week study arm achieved SVR 12, with one on-treatment virologic failure, probably due to suboptimal treatment adherence, one discontinuation at day 2 due to non-compliance with the study protocol, and two people with missing SVR12 data. None of the participants discontinued treatment as a result of study drug-related adverse events. The most common adverse events were headache (19%) and fatigue (9% in the 8-week group and 12% in the 12-week group). Two people in the 8-week and one participant in the 12-week group experienced a grade 3 bilirubin elevation (3-10 x ULN).

ENDURANCE-2 tested the combination in previously untreated or treatment-experienced people with genotype 2 infection.

The study recruited 302 people, of which 29% were treatment-experienced. The study population was 49% male in the active drug arm and 45% male in the placebo arm, 60% white in both study arms and 34% Asian. The median age of participants was 58 years.

Study participants had less advanced liver disease: 76% in the active drug arm had F0 or F1 fibrosis, 9% had F2 fibrosis and 15% had F3 fibrosis.

The sustained virologic response rate was 99% by intent-to-treat analysis. No virologic failures occurred in this study. One participant who achieved SVR 4 was lost to follow-up before a 12-week post-treatment evaluation. There were no treatment discontinuations due to adverse events.

All participants received glecaprevir and pibrentasvir (300mg/120mg) once daily for 12 weeks.

As in other ENDURANCE studies the vast majority of participants had less advanced liver disease (86% F0/F1), with 7% having F2 and 7% having F3 fibrosis. Approximately two-thirds (68%) were previously untreated and all treatment-experienced participants had previous exposure only to interferon-based treatment.

In the overall study population intent-to-treat analysis showed that 99% achieved SVR12. One person in the genotype 4 arm discontinued treatment on day 12 due to a transient ischaemic attack. Two other participants discontinued treatment before the end of the treatment period due to anxiety and to heartburn respectively. Both achieved SVR12. No cases of virologic breakthrough or rebound occurred in the study population.

Asselah T et al. ENDURANCE-4: efficacy and safety of ABT-493/ABT-530 treatment in patients with chronic HCV genotype 4, 5, or 6 infection. Hepatology Special Issue, The 67th Meeting of the American Association for the Study of Liver Diseases: The Liver Meeting, abstract 114, Boston, 2016.

Zeuzem S et al. ENDURANCE-1: efficacy and safety of 8- versus 12-week treatment with ABT493/ABT-530 in patients with chronic HCV genotype 1 infection. Hepatology Special Issue, The 67th Meeting of the American Association for the Study of Liver Diseases: The Liver Meeting, abstract 253, Boston, 2016.