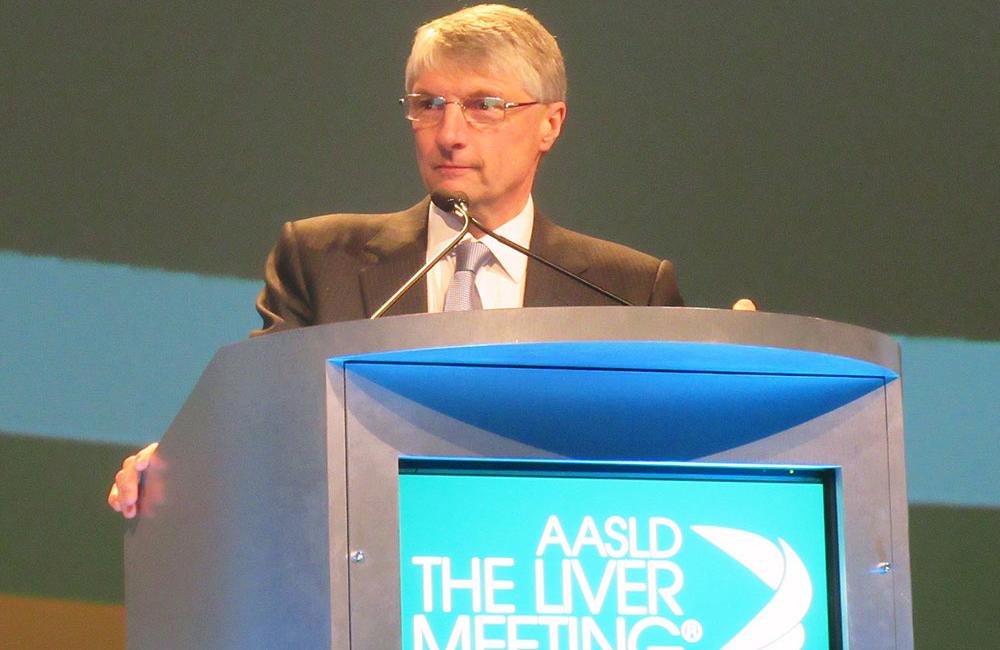 A three-drug regimen of sofosbuvir, velpatasvir and voxilaprevir taken for 8 weeks demonstrated an overall sustained virological response rate of 95% for previously untreated people with all hepatitis C virus (HCV) genotypes, while a 12-week regimen cured 96-97% of people who experienced prior treatment failure on direct-acting antivirals (DAAs), according to a set of phase 3 studies presented last week at the 2016 AASLD Liver Meeting in Boston.

The 8-week triple regimen failed to match a 12-week dual regimen of sofosbuvir and velpatasvir for treatment-naive patients due to a number of relapses among people with HCV genotype 1a. But the shorter regimen did cure 96-99% of the most difficult-to-treat genotype 3 patients with cirrhosis.

The advent of DAAs used in interferon-free regimens has made treatment for chronic hepatitis C shorter, more convenient and much more effective, but there is still room for better options for hard-to-treat patient groups. There is also an unmet need for pangenotypic regimens that are active against all HCV genotypes and could be used anywhere in the world without the need for genotypic testing.

Gilead already sells two highly effective dual co-formulations, sofosbuvir/ledipasvir (Harvoni) and sofosbuvir/velpatasvir (Epclusa), the latter of which is pangenotypic. However, it does not yet have an approved HCV protease inhibitor.

This analysis included 941 participants enrolled at 117 sites in the UK, US, Canada, France, Germany, Australia, and New Zealand. About half were men, 80% were white and the mean age was approximately 53 years. About a quarter had received interferon-based therapy, but they had not previously used DAAs.

In this open-label study participants with genotypes 1-4 were randomly assigned to receive the triple regimen for 8 weeks or the dual regimen for 12 weeks; all people with genotype 5 or 6 got the three-drug regimen. The primary study endpoint was sustained virological response, or continued undetectable HCV RNA at 12 weeks after completing treatment (SVR12).

SVR12 rates for people without cirrhosis were 96% for the triple regimen and 98% for the dual regimen; among people with cirrhosis cure rates were 91% and 99%, respectively, indicating that the disadvantage of shorter therapy was more pronounced in this group.  People with and without resistance-associated substitutions at baseline had high SVR rates – 97% and 98%, respectively – and everyone with baseline NS5B RASs was cured.

Treatment was generally safe and well tolerated with no serious drug-related adverse events and just two discontinuations due to adverse events, both in the dual therapy arm. The most common adverse events were headache, fatigue, diarrhoea and nausea. Gastrointestinal side-effects were about twice as common with the regimen containing voxilaprevir (18% vs 7% for diarrhoea; 16% vs 9% for nausea), but were mostly mild.

This direct comparison of two combinations was able to tease out a higher relapse rate for genotype 1a that was not apparent in phase 2 studies. This study, the researchers said, "demonstrates the value of large controlled trials to compare highly effective regimens."

Graham Foster of Queen Mary University in London reported findings from POLARIS-3, which specifically looked at one of the hardest-to-treat patients groups, those with HCV genotype 3 and compensated cirrhosis; about a third were also previously treated with interferon. Current recommended regimens for interferon-experienced people with genotype 3 and cirrhosis require longer duration or addition of ribavirin – or both – which adds to the cost and side-effects of treatment.

This analysis included 219 participants from the same countries. About 70% were men, 90% were white and the average age was approximately 54 years. At baseline the mean HCV viral load was about 6.2 log10 IU/ml. The mean FibroScan fibrosis score was 22.5 (14 or 15 is the usual cut-off for stage F4 or cirrhosis) and they had a low platelet count (mean 145,000/mcl) indicating impaired liver function.

Among previously untreated people, SVR12 rates were 96% for the triple regimen and 99% for the dual regimen. Among treatment-experienced people response rates were 97% and 91%, respectively.

In both arms SVR12 rates were 95% for people with no baseline resistance-associated substitutions, while all those with any type of RASs – including the Y93H mutation – were cured. There were no treatment-emergent RASs in the sofosbuvir/velpatasvir/voxilaprevir arm, but both virological failures in the sofosbuvir/velpatasvir group developed the Y93H mutation.

Treatment was again well tolerated with no serious drug-related adverse events and only one discontinuation due to an adverse event in the dual regimen arm. Nausea (21% vs 9%) and diarrhoea (15% vs 5%) were again more common among people taking voxilaprevir.

In this study treatment-naive patients were well-served by 12 weeks of dual therapy, Prof. Foster said, but treatment-experienced people did better on triple therapy even though the duration was shorter.

POLARIS-1 AND POLARIS-4 evaluated sofosbuvir/velpatasvir/voxilaprevir as 'salvage therapy' for people who were not previously cured with prior DAA regimens.

Stephan Zeuzem of JW Goethe University Medical Centre presented results from POLARIS-4, which enrolled 333 people with all HCV genotypes who had previously been treated with DAAs, but had not used an NS5A inhibitor or an older HCV protease inhibitor plus pegylated interferon/ribavirin.

Again most were white men with an average age of 57 years. About 30% had HCV genotype 1a, about 13% had 1b, about 19% had genotype 3, 32% had genotype 3, and about 5% had genotype 4; no one had genotypes 5 or 6. Nearly half had cirrhosis and the mean baseline viral load was 6.3 log10 IU/ml. The majority (69%) had previously used sofosbuvir and a quarter had used an NS5B inhibitor plus an HCV protease inhibitor (including discontinued investigational agents).

Of the 22 patients with NS5B resistance-associated substitutions at baseline, all achieved SVR12. The relapser in the triple therapy arm had no treatment-emergent RASs, but 10 of the 15 people with virological failure in the dual therapy arm developed Y93 mutations.

Again treatment was generally well tolerated with no serious drug-related adverse events, and diarrhoea (20% vs 5%) and nausea (12% vs 8%) were more common with voxilaprevir. But Prof. Zeuzem stressed that in nearly 90% of cases the diarrhoea was grade 1 – meaning no more that two soft stools per day – and the rest were grade 2.

Finally, turning to individuals who had previously used NS5A inhibitors, Marc Bourlière of Hospital Saint Joseph presented findings from POLARIS-1, which compared sofosbuvir/velpatasvir/voxilaprevir for 12 weeks against a placebo.

All participants had previously received NS5A inhibitors including ledipasvir (51%), daclatasvir (27%), ombitasvir as part of the AbbVie "3D" regimen (11%) or others (13%).

The SVR12 rate in the triple therapy arm was 96%, while no one in the placebo arm achieved sustained response. There was one viral breakthrough in a patient thought to be non-adherent and six relapses. Cure rates were 96% for genotype 1a, 100% for 1b, 2, 5 and 6, 95% for genotype 3, and 91% for genotype 4. Ninety-nine per cent of people without cirrhosis and 93% of those with cirrhosis achieved SVR12, and all relapsers had cirrhosis.

People with and without resistance-associated substitutions at baseline had similar response rates (96% and 98%); however, those with only NS5A RASs did a bit worse (94%). None of the relapsers developed treatment-emergent RASs.

Here too, treatment was generally well tolerated with no serious drug-related adverse events. The frequency of diarrhoea in the triple therapy arm (18%) was within the range seen in the other POLARIS trials – but this side-effect was actually more common in the placebo arm (13%) than in the dual therapy arm of the other studies.

"In NS5A-inhibitor experienced patients, treatment with sofosbuvir/velpatasvir/voxilaprevir for 12 weeks resulted in a 96% SVR rate in difficult-to-cure patients with multiple unfavourable characteristics," the researchers concluded.

"We now have near 100% cure rate options for all the patients we come across," Prof. Foster said.

Gilead recently indicated that it plans to request US Food and Drug Administration approval of the sofosbuvir/velpatasvir/voxilaprevir co-formulation by the end of 2016.

Bourlière M et al. Sofosbuvir/velpatasvir/voxilaprevir for 12 weeks as a salvage regimen in NS5A inhibitor-experienced patients with genotype 1-6 infection: the phase 3 POLARIS-1 study. The 67th Meeting of the American Association for the Study of Liver Diseases: The Liver Meeting, abstract 194, Boston, 2016.

Jacobson IM et al. A randomized phase 3 trial of sofosbuvir/velpatasvir/voxilaprevir for 8 weeks compared to sofosbuvir/velpatasvir for 12 weeks in DAA-naive genotype 1-6 HCV-infected patients: the POLARIS-2 study. The 67th Meeting of the American Association for the Study of Liver Diseases: The Liver Meeting, abstract LB-12, Boston, 2016.

Foster GR et al. A randomized phase 3 trial of sofosbuvir/velpatasvir/voxilaprevir for 8 weeks and sofosbuvir/velpatasvir for 12 weeks for patients with genotype 3 HCV infection and cirrhosis: the POLARIS-3 study. The 67th Meeting of the American Association for the Study of Liver Diseases: The Liver Meeting, abstract 258, Boston, 2016.

Zeuzem S et al. A randomized, controlled, phase 3 trial of sofosbuvir/velpatasvir/voxilaprevir or sofosbuvir/velpatasvir for 12 weeks in direct acting antiviral-experienced patients with genotype 1-6 HCV infection: the POLARIS-4 study. The 67th Meeting of the American Association for the Study of Liver Diseases: The Liver Meeting, abstract 109, Boston, 2016.