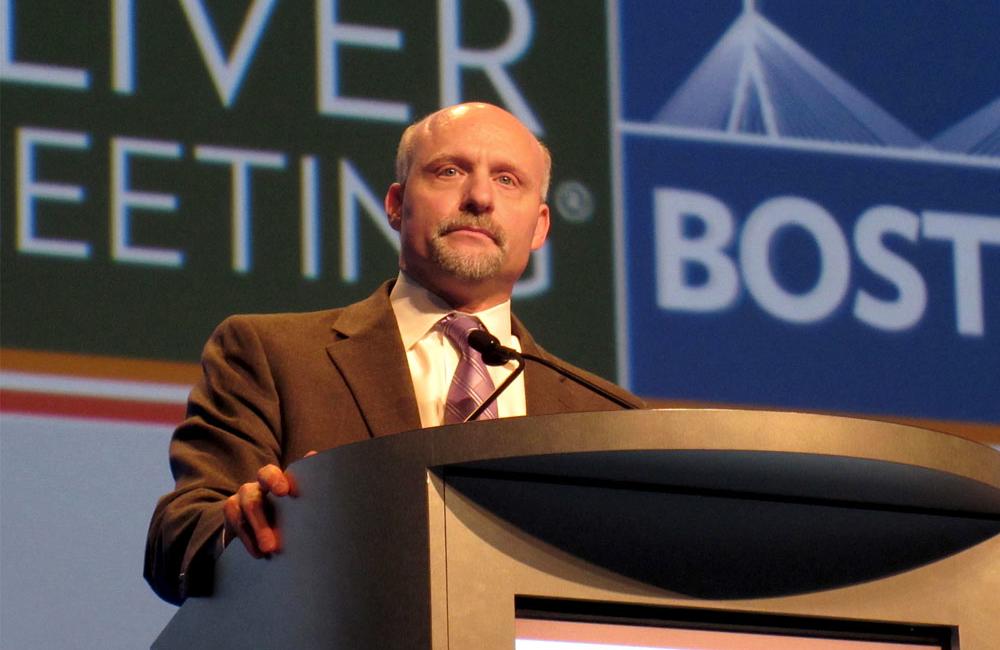 Steven Flamm, speaking at the American Association for the Study of Liver Diseases (AASLD) Liver Meeting. Photo by Liz Highleyman, hivandhepatitis.com.
This article is more than 8 years old. Click here for more recent articles on this topic

An oral regimen of sofosbuvir/ledipasvir plus ribavirin taken for 12 weeks cured most hepatitis C patients with decompensated cirrhosis, the most advanced stage of liver disease, according to a presentation on Tuesday at the American Association for the Study of Liver Diseases (AASLD) Liver Meeting in Boston.

Over years or decades, chronic hepatitis C virus (HCV) infection can lead to serious complications including cirrhosis and liver cancer. As liver disease progresses, function typically diminishes gradually at first, as the liver can compensate for some damage. Eventually, however, scar tissue blocks normal blood flow and the liver cannot carry out its vital functions such as filtering toxins and producing proteins – a condition known as decompensated cirrhosis. People at this stage of liver failure may develop symptoms such as ascites (abdominal fluid build-up), bleeding veins in the oesophagus and stomach, internal infection and hepatic encephalopathy (brain impairment).

Traditionally, before direct-acting antiviral agents became available, hepatitis C patients with decompensated cirrhosis were considered too ill to treat with interferon-based therapy. Those who were treated on an experimental basis did not tolerate drugs well and had a low likelihood of sustained response. There is currently no approved treatment for this population.

With the advent of new direct-acting antivirals that are highly effective and well-tolerated, treating this sickest group of patients has become a priority. Ideally, effective treatment would eradicate HCV and allow the liver to heal, restoring some function and perhaps making liver transplants unnecessary.

Steven Flamm from Northwestern University in Chicago presented findings from SOLAR-1, a study testing an all-oral regimen of direct-acting antivirals that have minimal side-effects and cure most people with less advanced liver disease.

A total of 108 patients with genotype 1 or 4 chronic hepatitis C and decompensated cirrhosis were treated with a once-daily co-formulation of Gilead Sciences' HCV polymerase inhibitor sofosbuvir and NS5A inhibitor ledipasvir (approved and sold as Harvoni in the US). They were randomly assigned to receive therapy for 12 or 24 weeks.

Because people with more advanced liver disease traditionally respond less well to treatment, all patients also took ribavirin, which helps reduce post-treatment relapse. Participants started at a low dose of 600mg/day and the amount was escalated based on tolerability, up to the standard weight-based dose of 1000-1200mg/day. Flamm said that the median dose was just over 600mg/day, with about one-third of patients tolerating the full dose.

Two-thirds of participants were men, more than 90% were white and the median age was about 60 years – a bit older than hepatitis C patients with less advanced disease. Approximately two-thirds had harder-to-treat HCV genotype 1a and three people had genotype 4; about 80% had unfavourable IL28B genetic variants. More than 60% had previously undergone unsuccessful hepatitis C treatment.

Most participants completed treatment. Three people died during the study, three withdrew due to adverse events and four were able to obtain liver transplants.

Overall, 87% of participants treated for 12 weeks and 89% of those treated for 24 weeks achieved SVR12, or continued undetectable HCV viral load 12 weeks after completing therapy, which is considered a cure. Rates were similar for patients with CPT Class B (87% and 89%) and Class C (86% and 90%). Among the few participants with HCV genotype 4, two achieved SVR12 and two were lost to follow-up.

Successful treatment not only eradicated HCV, but was associated with improvement in liver function. Bilirubin levels fell and albumin blood protein levels rose from baseline to week four post-treatment. Most participants (33) saw decreases – or improvement – in their CPT scores, with ten having no change and four having higher scores. Likewise, MELD scores also fell for most patients in both the Class B and Class C groups.

Sofosbuvir/ledipasvir plus ribavirin was generally safe and well-tolerated, although almost all participants experienced some adverse events – not surprising for such a sick population. About one-quarter experienced serious adverse events, but only four were considered treatment-related. As noted, three people discontinued therapy due to adverse events.

Sofosbuvir/ledipasvir plus ribavirin for 12 weeks "resulted in a high SVR12 rate in HCV patients with genotype 1 and 4 and advanced liver disease," the researchers concluded.

"Relapse rates were similar to relapse rates in patients with compensated cirrhosis," they continued, and "extending treatment duration to 24 weeks did not increase the response rate."

Virological response was associated with improvements in bilirubin, albumin, MELD and CPT scores in patients with Class B and Class C, and Flamm stressed that "sicker patients did equally well."

During the discussion after the presentation, a clinician raised the issue that by lowering patients' CPT and MELD scores – which are used to determine transplant priority – patients might be put at a disadvantage.

"Some [patients] may get better and not need a transplant, and people can die while waiting," Flamm replied. "The onus is on us to help patients, and I don’t think we're hurting them by curing hepatitis C."