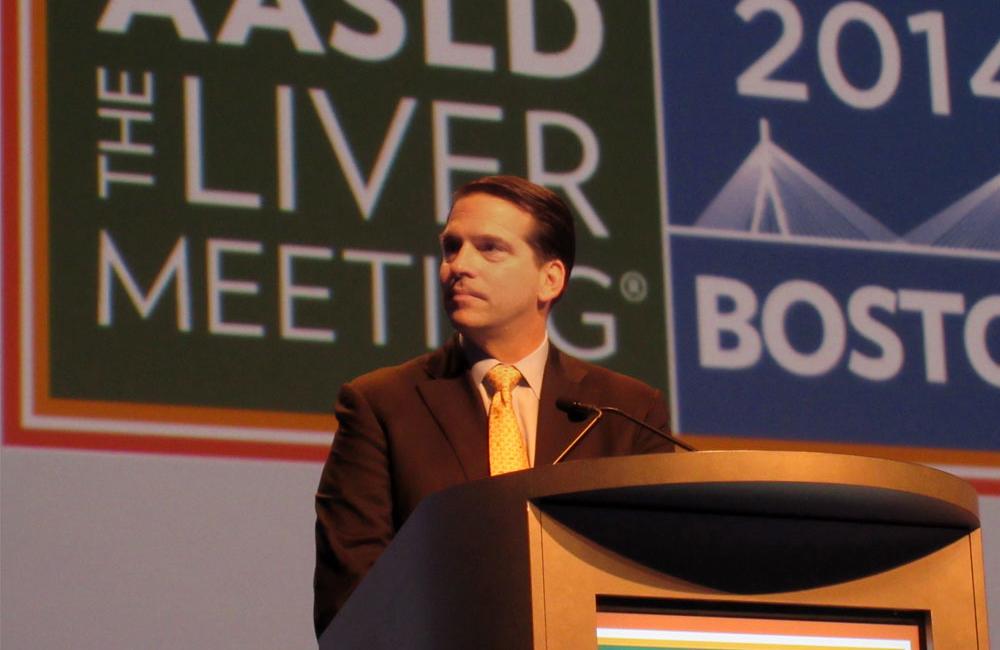 Mark Sulkowski, of Johns Hopkins University, speaking at the American Association for the Study of Liver Diseases (AASLD) Liver Meeting. Photo by Liz Highleyman, hivandhepatitis.com.
This article is more than 8 years old. Click here for more recent articles on this topic

An all-oral regimen of grazoprevir (MK-5172) and elbasvir (MK-8742), taken with or without ribavirin for 12 weeks, demonstrated high sustained virological response (SVR) rates for treatment-naive and treatment-experienced people with genotype 1 hepatitis C virus (HCV), including people with liver cirrhosis and HIV and HCV co-infection, researchers reported on Tuesday at the American Association for the Study of Liver Diseases (AASLD) Liver Meeting in Boston, USA. However, pushing treatment duration with this combination plus sofosbuvir down to 4 or 6 weeks raised the risk of treatment failure.

The phase 2 C-WORTHY trial evaluated Merck's investigational HCV protease inhibitor grazoprevir plus NS5A inhibitor elbasvir, taken with or without ribavirin. After Part A saw good outcomes for previously untreated people with genotype 1 hepatitis C and no liver cirrhosis, the study was expanded to include more people with traditional predictors of poor treatment response.

Mark Sulkowski from Johns Hopkins reported final combined results from the 218 patients with HCV mono-infection and HIV/HCV co-infection without cirrhosis in both Part and A and Part B.

Half of the participants with HCV mono-infection and 80% of the participants with HIV/HCV co-infection were men, most were white and the mean ages were 49 and 45 years, respectively. Three-quarters had harder-to-treat HCV genotype 1a and most had unfavourable IL28B gene variants. More than 90% had absent-to-mild liver fibrosis while 8% had advanced fibrosis (stage F3).

The participants with HIV and HCV co-infection were required to be on stable antiretroviral therapy containing raltegravir (Isentress), which was shown not to interact with the HCV drugs. They had CD4 cell counts above 300 cells/mm3 (median 626 cells/mm3) and undetectable HIV viral load for at least six months.

The primary intent-to-treat analysis showed that 98% of people with HCV mono-infection treated with grazoprevir plus elbasvir alone for 12 weeks, and 93% of those whose treatment included ribavirin, achieved SVR12, or continued undetectable HCV RNA at 12 weeks after finishing treatment. Among patients with genotype 1a treated with the triple combination for just 8 weeks, however, SVR12 fell to 80%. The takeaway message, Sulkowski said, is that the 8-week regimen was too short for this group.

Turning to the participants with HIV and HCV co-infection, 87% of people treated with grazoprevir plus elbasvir alone for 12 weeks, and 97% of those who included ribavirin, achieved SVR12.

The grazoprevir/elbasvir regimens used in C-WORTHY were generally safe and well-tolerated. A total of three participants experienced serious adverse events, but no one stopped treatment early for this reason. Nine per cent of people with HCV mono-infection taking ribavirin – but interestingly, just 3% of people with HIV co-infection – developed anaemia. The most common side-effects were fatigue, headache, nausea and diarrhoea, with patients who had HIV co-infection reporting fewer symptoms. None of the HIV-positive participants experienced HIV viral breakthrough and CD4 cell counts remained stable.

In response to a question about patients with HIV co-infection using other antiretrovirals besides raltegravir, Sulkowski said that studies were underway testing the Merck HCV drugs with dolutegravir (Tivicay, also in the Triumeq co-formulation) and rilpivirine (Edurant, also in Eviplera or Complera).

Eric Lawitz from the Texas Liver Institute reported results from the remaining harder-to-treat C-WORTHY subgroups, consisting of 253 people with liver cirrhosis and/or prior null response to interferon-based therapy.

In this analysis, looking first at treatment-naive participants with cirrhosis, 97% who took grazoprevir and elbasvir alone for 12 weeks and 90% of those who added ribavirin achieved SVR12. Among those treated for 18 weeks, response rates were 94% without and 97% with ribavirin.

Among prior null responders, SVR12 rates were 91% with grazoprevir and elbasvir alone for 12 weeks and 94% for those who added ribavirin. Among those treated for 18 weeks, corresponding response rates were 97% and 100%. Across all groups there were two on-treatment viral breakthroughs and eight post-treatment relapses, six of which occurred without ribavirin.

Combining all regimens, SVR12 rates were 93% for people with HCV genotype 1a and 99% for those with 1b. Participants with and without cirrhosis (both 95%), and treatment-naive patients and null responders (94% and 95%), had similar SVR12 rates when considered independently. However, null responders with cirrhosis treated for 12 weeks had the lowest cure rate, at 92% – still quite high for such a difficult-to-treat population.

The researchers concluded that "high efficacy was achieved regardless of the presence or absence of ribavirin or extended treatment duration from 12 to 18 weeks."

Several other studies presented at the Liver Meeting showed that use of ribavirin or longer treatment durations may still be necessary for some hard-to-treat patients, including people with cirrhosis. Lawitz said the results so far from C-WORTHY suggest that ribavirin may not be required with grazoprevir/elbasvir, and that 12 weeks of therapy may be sufficient, but further data from larger phase 3 trials are needed.

Results from C-WORTHY support ongoing phase 3 development of grazoprevir plus elbasvir, the researchers concluded. The drugs are now being tested in a once-daily fixed-dose co-formulation. Merck's phase 3 trials C-EDGE TN (treatment-naive), C-EDGE CO-INFXN (HIV/HCV coinfected) and C-EDGE TE (treatment-experienced) are now fully enrolled. Results are expected in the first half of 2015, at which point the company plans to file for US Food and Drug Administration (FDA) approval, according to a Merck press release.

While everyone would like to minimise treatment duration in order to improve convenience and adherence and reduce toxicities and cost, results from another Merck study, presented as a late-breaking poster, showed that very short treatment is not as effective.

C-SWIFT was an exploratory phase 2 trial designed to test the efficacy of short regimens consisting of the grazoprevir/elbasvir co-formulation plus Gilead Sciences' nucleotide HCV polymerase inhibitor sofosbuvir (Sovaldi). Participants in this study did not use ribavirin. Researchers hypothesised that the triple regimen – which targets three separate steps of the HCV lifecycle – might allow for a shorter duration of treatment.

This trial enrolled 102 people with genotype 1 hepatitis C at the Texas Liver Institute, including 41 with cirrhosis. All were previously untreated and about 81% had HCV genotype 1a. Participants who did not have cirrhosis were randomly assigned to receive the three-drug regimen for 4 or 6 weeks, while those with cirrhosis were treated for 6 or 8 weeks. (Another part of this trial, not reported at the meeting, is looking at the triple combination taken for 8 or 12 weeks for people with HCV genotype 3.)

Across arms, most participants had reached undetectable viral load by the end of therapy and all had done so by post-treatment week 2. After this, however, relapse rates began to diverge.

There were no viral breakthroughs while on therapy, but one person treated for 8 weeks, 8 people treated for 6 weeks and 19 people treated for only 4 weeks experienced post-treatment relapse; 25 of the 28 relapses occurred in people with HCV subtype 1a. Relapse was about equally due to wild-type and drug-resistant virus.

Co-administration of grazoprevir/elbasvir with sofosbuvir was generally safe and well-tolerated. There were two serious adverse events and one discontinuation for this reason. The most common side-effects were headache, fatigue and nausea.

"A regimen combining three potent antivirals may be able to shorten treatment duration to 6-8 weeks among cirrhotic and non-cirrhotic genotype 1-infected patients," the researchers concluded. They suggested that factors including HCV subtype (1a vs 1b), baseline viral load, IL28B status and drug pharmacokinetics might have contributed to the lower likelihood of response in the shorter duration arms.

"These interim data provide a compelling proof-of-concept for the potential of an 8- or 6-week triple therapy course in treatment-naive patients with genotype 1 disease, including cirrhotic patients," Lawitz stated in another Merck press release. "These findings will inform the design of larger studies aimed at understanding the potential of short-duration triple therapy across multiple patient types."