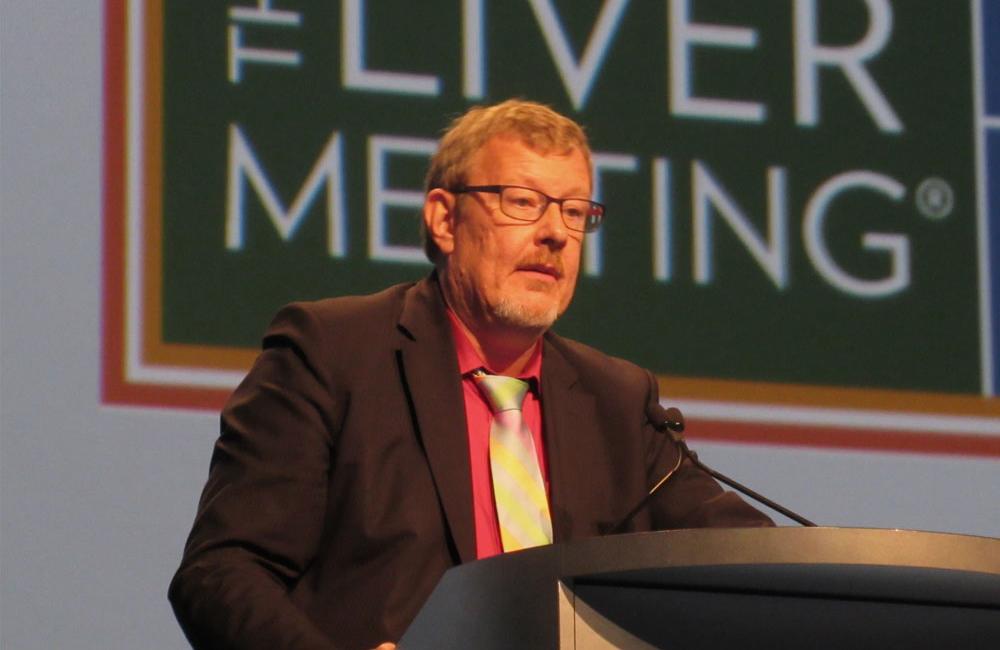 Jürgen Rockstroh, speaking at the American Association for the Study of Liver Diseases (AASLD) Liver Meeting. Photo by Liz Highleyman, hivandhepatitis.com.
This article is more than 7 years old. Click here for more recent articles on this topic

AbbVie's 3D regimen (paritaprevir/ombitasvir/ritonavir plus dasabuvir) with ribavirin for 12 weeks and Gilead Science's sofosbuvir (Sovaldi) plus ribavirin for 24 weeks both produced good sustained virological response rates for most people with HIV and hepatitis C virus (HCV) co-infection, according to studies presented at the American Association for the Study of Liver Diseases (AASLD) Liver Meeting last week in Boston, United States.

People with HIV and HCV co-infection tend to experience more rapid liver disease progression and traditionally were considered more difficult to treat using interferon-based therapy than people with HCV mono-infection. With the advent of all-oral direct-acting antiviral regimens, however, a growing body of evidence indicates that people with co-infection have response rates similar to those of people with hepatitis C alone.

David Wyles from the University of California at San Diego and fellow investigators presented a poster outlining results from the phase 2 portion of AbbVie's combined phase 2/3 TURQUOISE-I trial. This study tested the all-oral 3D regimen – expected to be approved soon in the US and Europe – for previously untreated and treatment-experienced people with HCV genotype 1 and HIV co-infection, with and without compensated liver cirrhosis.

3D consists of the HCV NS3/4A protease inhibitor paritaprevir (ABT-450), NS5A inhibitor ombitasvir (ABT-267) and a ritonavir booster in a once-daily co-formulation, taken with the twice-daily non-nucleoside HCV NS5B polymerase inhibitor dasabuvir (ABT-333). In this open-label trial, 63 participants were randomly assigned to receive 3D plus weight-based ribavirin for either 12 or 24 weeks.

TURQUOISE-I was conducted in the US including Puerto Rico. Most study participants were men, three-quarters were white and the average age was 51 years. Two-thirds were treatment-naive and one-third had previously tried interferon-based therapy, including prior relapsers (about 6%), partial responders (about 11%) and null responders (about 16%). More than 90% had harder-to-treat HCV subtype 1a, about 80% had unfavourable IL28B gene variants and 19% had cirrhosis. People triply infected with hepatitis B virus were excluded.

Participants had a high mean CD4 cell count of approximately 630 cells/mm3. They were taking stable suppressive antiretroviral therapy (ART) containing tenofovir/emtricitabine (the drugs in Truvada) plus either atazanavir (Reyataz) or raltegravir (Isentress), which were found to have no clinically relevant interactions with the AbbVie HCV drugs. People taking atazanavir stopped taking stand-alone ritonavir, as it is included in the paritaprevir/ombitasvir co-formulation.

At 12 weeks post-treatment, 94% of participants in the 12-week treatment arm and 91% in the 24-week arm achieved sustained virological response (SVR12), or continued undetectable HCV viral load. In both arms combined, SVR12 rates were 91% among people with HCV subtype 1a and 100% among those with subtype 1b.

In the 12-week arm, one patient relapsed at post-treatment week 4 and one withdrew consent before finishing treatment. In the 24-week arm, one experienced viral breakthrough while still on treatment and two appeared to be reinfected with different HCV strains. Both the relapser and the patient with viral breakthrough were prior null responders with cirrhosis, and both had treatment-emergent NS3/4A, NS5A and NS5B resistance-associated viral variants.

The 3D regimen plus ribavirin was generally safe and well-tolerated, with no serious adverse events and no treatment discontinuations for this reason. The most common side-effects were fatigue, insomnia, nausea and headache. Two-thirds of patients experienced elevated bilirubin levels and about 11% developed moderate anaemia. Six people reduced their ribavirin doses due to anaemia, but all went on to achieve SVR12.

"The high rates of virologic response and low rates of treatment discontinuation in the broadly representative cohort of HIV/HCV coinfected patients are consistent with results reported for the 3D + ribavirin combination in patients with HCV genotype 1 infection alone," the researchers concluded.

They added that the lower frequency of anaemia seen in this study compared to prior studies of interferon-based therapy for people with co-infection "is likely due to the absence of the bone marrow suppressant effect of interferon."

The phase 2 portion of TURQUOISE-I is ongoing with participants with co-infection receiving the HIV protease inhibitor darunavir (Prezista). The international phase 3 portion is currently recruiting participants.

Jürgen Rockstroh from the University of Bonn presented final combined results from the phase 3 PHOTON trials, which evaluated a dual oral regimen of the nucleotide HCV polymerase sofosbuvir plus ribavirin. Sofosbuvir was recently approved in the US and Europe and its recommended indications are the same for people with HIV and HCV co-infection and those with HCV alone.

PHOTON-1 was conducted in the US and PHOTON-2 took place in Europe and Australia. The two studies combined included a total of 497 participants. About 80% were men, most were white and the average age was 48 years. Just under half (46%) had HCV genotype 1, 15% had genotype 2, 33% had genotype 3 and 6% had genotype 4. Most (81%) were previously untreated for hepatitis C, about 60% had unfavourable IL28B variants and 15% had compensated cirrhosis.

The mean CD4 count was again high (605 cells/mm3) and almost all were on suppressive ART containing tenofovir/emtricitabine plus efavirenz (Sustiva; 30%), raltegravir (20%), boosted darunavir (19%), boosted atazanavir (17%), rilpivirine (Edurant; 5%) or other drugs (8%).

All participants received once-daily sofosbuvir plus ribavirin, with treatment duration determined by genotype:

Among people with genotype 2, SVR12 rates were 100% for patients with and 88% for those without cirrhosis in both the treatment-naive 12-week and treatment-experienced 24-week arms.

Among the participants with treatment failure, 70 were due to post-treatment relapse, three were due to viral breakthrough during treatment, six withdrew consent and five were lost to follow-up.

The sofosbuvir plus ribavirin regimen was also generally safe and well-tolerated. In both the 12-week and 24-week arms, 6% experienced serious adverse events and 3% discontinued therapy for this reason. The most commonly reported side-effects were again fatigue, insomnia, nausea and headache. About 10% developed moderate anaemia, but fewer than 1% had severe anaemia. Six people experienced HIV breakthrough during hepatitis C treatment (two of whom were non-adherent) but none required ART modification. CD4 counts dropped temporarily – a known effect of ribavirin – but CD4 percentages remained stable.

"Sofosbuvir + ribavirin resulted in high SVR12 rates in HIV patients coinfected with HCV genotype 1, 2, 3 or 4," the researchers concluded. "Rates were similar to those in HCV monoinfected patients."

Rockstroh noted that adverse event rates in this study were "much lower than anything we saw previously in coinfected patients in the interferon era," which gives support to hepatitis C treatment guidelines that no longer separate people with HCV mono-infection and people with HIV/HCV co-infection.

Moderator Anna Lok pointed out that while these results "would have been very exciting a couple years ago," the field has moved on. A sofosbuvir/ledipasvir co-formulation is now available (approved and marketed as Harvoni in the US) that has shown higher cure rates – including for people with co-infection – and eliminates ribavirin and its side-effects.

Rockstroh suggested that sofosbuvir plus ribavirin "is likely to remain the standard of care for genotype 2," but for people with other genotypes "adding another direct-acting antiviral is the way to go," as this may allow shorter treatment which would have a cost benefit.