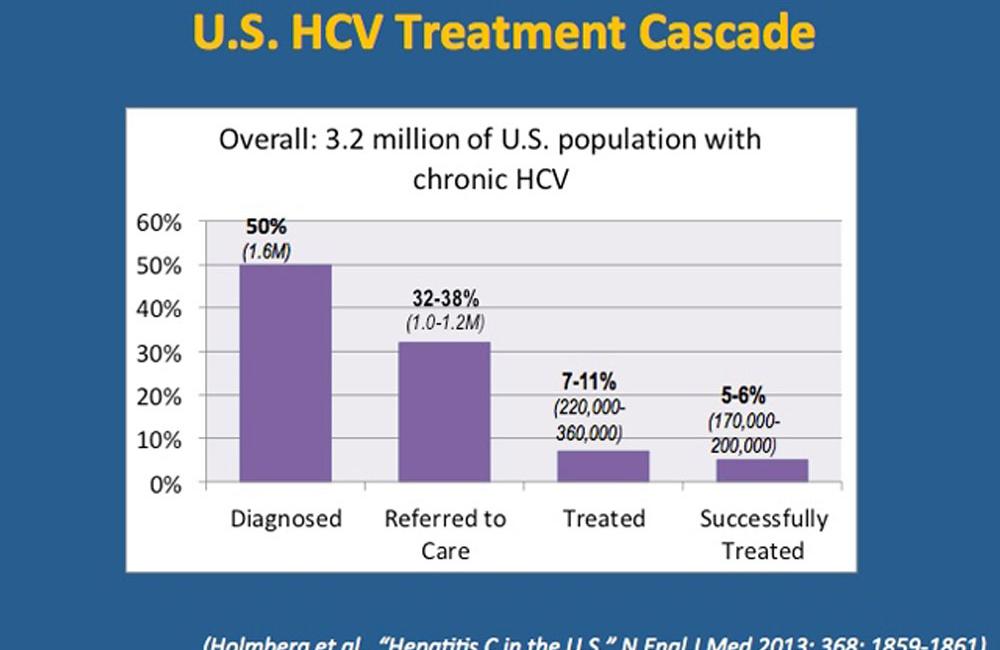 HCV treatment cascade illustration, part of the presentation by Ronald Valdiserri, US Deputy Assistant Secretary for Health, at The Liver Meeting 2013.
This article is more than 9 years old. Click here for more recent articles on this topic

Hepatitis C treatment that leads to viral suppression significantly reduces the likelihood of liver disease progression and liver-related mortality, but most people with hepatitis C remain untreated, according to a presentation at The Liver Meeting 2013, the 64th annual meeting of the American Association for the Study of Liver Diseases (AASLD), last week in Washington, DC. Other studies found that a growing proportion of liver transplants are due to hepatocellular carcinoma, which can still occur even after treatment.

Over years or decades, chronic hepatitis C virus (HCV) infection can lead to serious liver disease including cirrhosis, hepatocellular carcinoma (HCC) and end-stage liver failure. Up to 20% of people with chronic hepatitis C develop cirrhosis within 20 years, and among these the risk of HCC may reach 4%. Successful treatment of hepatitis C has the potential to slow or halt liver disease progression and reduce the risk of long-term consequences including liver cancer and liver-related death.

Jeffrey McCombs of the University of Southern California in Los Angeles looked at the impact of HCV viral load suppression with treatment on the risk of morbidity and mortality among people living with chronic hepatitis C and receiving care through the US Veterans Health Administration.

This observational cohort study included 128,769 eligible patients in the Department of Veterans Affairs HCV Clinical Case Registry during the period 1999-2010 (out of a pool of nearly 361,000) who had detectable HCV RNA (>25 IU/ml) and available HCV genotype data. Almost all were men, half were white, one-third were black and the average age was 52 years. Most (79%) had HCV genotype 1, the most common type in the US and the hardest to treat.

Over a median follow-up period of six years, 24% of patients in the analysis started hepatitis C treatment but only 16% of treated individuals – or just 4% overall – achieved undetectable viral load at some point after starting therapy.

Introducing a 'Hepatitis Debrief' on the final day of the conference, Ronald Valdiserri, US Deputy Assistant Secretary for Health, described the national HCV 'treatment cascade' in the US. According to a 2013 report by Scott Holmberg from the Centers for Disease Control and Prevention (CDC) and colleagues, 50% of people with chronic hepatitis C (1.6 million out of an estimated total of 3.2 million) have been diagnosed, 32 to 38% are referred to care, 7 to 11% start treatment and only 5 to 6% are successfully treated.

"Viral load suppression reduces risk of future liver events by 27% and death by 45%", the researchers concluded. These results from the first study using a large population of patients with a wide array of disease progression and levels of fibrosis, "verifies earlier findings that viral load reduction through treatment can significantly reduce the risk of adverse patient outcomes".

As a limitation, this analysis looked at whether people had ever reached undetectable viral load rather than sustained virological response (SVR) – the accepted definition of a cure – but McCombs noted that fewer than 20% of people who achieve undetectable HCV RNA are thought to relapse.

At a media overview on the first day of the conference, AASLD president Gregory Fitz noted that while only one-quarter of veterans received treatment, "if you did, you lived longer and lived better". He noted that McCombs' results were based on "old school treatment" using interferon-based therapy, and that outcomes would likely be better using new direct-acting antiviral agents. But given the continued risk of liver cancer, he stressed that one "can't just clear the virus and think the story is over".

Successful therapy strongly reduces but does not eliminate the risk of HCC for people with hepatitis C who have already progressed to advanced fibrosis when they achieve SVR, the researchers noted as background.

Current AASLD guidelines consider HCC surveillance to be cost-effective if the annual risk exceeds 1.5%, although this might be lower for patients with SVR. Screening methods include regular ultrasound scans and measurement of alpha-fetoprotein levels.

This meta-analysis used data from 1000 people with chronic hepatitis C in one Canadian and nine European cohort studies who had advanced bridging fibrosis or cirrhosis and achieved SVR with interferon-based treatment. A majority of patients (68%) were men, the median age was 53 years and most (85%) had cirrhosis. People with hepatitis B or HIV co-infection were excluded.

Over a median follow-up period of 5.7 years, a total of 51 patients developed HCC. The cumulative 8-year HCC rate was 1.8% among people with advanced fibrosis, rising to 8.5% among those with cirrhosis. Cumulative HCC rates rose with age, from 2.6% for those younger than 45 years, to 9.7% for those aged 45 to 60, to 12.2% for those older than 60 at the start of treatment. HCC rates did not differ significantly by sex. Having diabetes was also a significant risk factor in a multivariate analysis (HR 2.36).

"Patients with HCV-induced cirrhosis who attain SVR remain at risk for HCC", the investigators concluded.

"The annual HCC risk was higher among older patients", they continued. "Our results suggest that the cost-effectiveness of HCC surveillance among cirrhotic patients with SVR will improve as the population with chronic HCV infection is aging".

Jennifer Flemming of Queen’s University in Ontario, Canada, reported findings from an analysis of US liver transplant waiting lists to determine trends in end-stage liver disease (ESLD) and HCC among people with hepatitis C, who account for about one-third of people wait-listed for liver transplantation in the US.

Prior studies have projected a rapid rise in ESLD and liver cancer as Americans with hepatitis C – largely members of the 'baby boom' generation (born 1945-1965) – grow older. Experts predict that HCV-related liver cirrhosis, ESLD and HCC are expected to peak around 2020.

This retrospective cohort study included 20,325 people with hepatitis C in the Scientific Registry for Transplant Recipients database who were on the waiting list for a first liver transplant between January 2003 and December 2010. Three-quarters were men, two-thirds were white and the median age was 54 years.

This shift is in part related to changes in the Model for End-stage Liver Disease (MELD) scoring system, which is used by the United Network of Organ Sharing to allocate donated organs, Flemming suggested. Though mostly based on symptoms of liver decompensation, the model was modified starting in 2002 to give higher priority to people with HCC.

"Looking to the future, the demand for liver transplantation for HCC will likely continue to rise and further strain the limited donor pool", the researchers concluded. This "could influence HCC listing policy over the next decade" and "may push the transplant community to consider non-transplant alternatives for HCC".

McCombs J et al. The risk of long-term morbidity and mortality in patients with chronic hepatitis C: results from an analysis of data from a Department of Veterans Affairs Clinical Registry. JAMA Internal Medicine, 5 November 2013 (epub).

Flemming JA et al. Increased rates of liver transplant wait-listing for hepatocellular carcinoma in individuals with hepatitis C from 2003-2010 in the United States. 64th Annual Meeting of the American Association for the Study of Liver Diseases, Washington, DC, abstract 12, 2013.