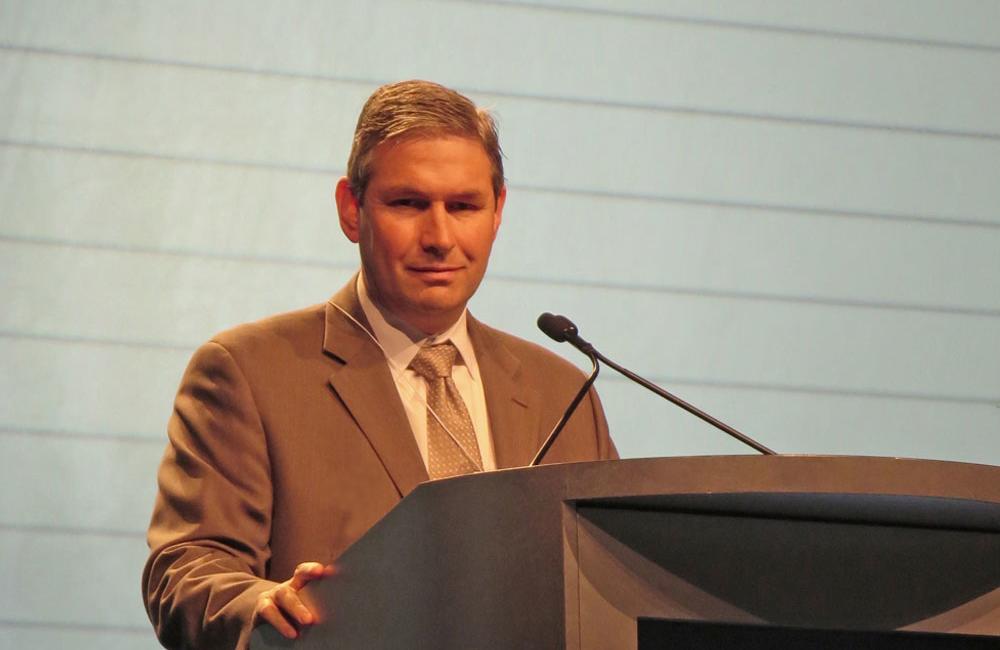 Michael Curry, of Beth Israel Deaconess Medical Center in Boston, speaking at The Liver Meeting 2013. Photo by Liz Highleyman, hivandhepatitis.com.
This article is more than 8 years old. Click here for more recent articles on this topic

An interferon-free combination of sofosbuvir plus ribavirin administered before liver transplantation prevented hepatitis C recurrence in nearly two-thirds of patients, while the same regimen led to early viral clearance in three-quarters of those treated after transplantation, according to studies presented this week at The Liver Meeting 2013, the 64th annual meeting of the American Association for the Study of Liver Diseases (AASLD) in Washington, DC.

This open-label phase 2 study enrolled 61 people at 16 sites, mostly in the US. Most participants (80%) were men, 90% were white and the median age was 59 years. A majority (73%) had HCV genotype 1 (including 39% with harder-to-treat subtype 1a), 13% had genotype 2, 12% had genotype 3 and one had genotype 4. Three-quarters had previously been treated for hepatitis C and 22% had the favourable IL28B CC gene variant associated with interferon responsiveness.

Participants had well-compensated liver disease and were listed for transplantation due to hepatocellular carcinoma, a type of liver cancer. The median MELD score was 8 and most had Child-Pugh scores of 5 (43%), 6 (30%) or 7 (23%). People with hepatitis B or HIV co-infection, decompensated cirrhosis or kidney impairment were excluded.

Participants received 400mg once-daily sofosbuvir plus 1000-1200mg/day weight-based ribavirin while awaiting transplants. The original protocol called for treatment lasting 24 weeks but this was later extended to 48 weeks. The last dose was taken on the day of transplantation. They received standard immunosuppressive therapy (tacrolimus, mycophenolate mofetil or prednisone) to prevent rejection of the new liver.

The primary study endpoint was post-transplant virological response, or continued undetectable HCV RNA among people who received sofosbuvir/ribavirin for more than 12 weeks and had undetectable viral load at the time of transplantation.

A total of 41 of participants underwent transplantation with undetectable HCV RNA while three people did so while viral load was still detectable. Ten discontinued treatment, four finished treatment but were still awaiting transplants and one was still on therapy while waiting.

HCV viral load declined rapidly after starting sofosbuvir/ribavirin. Most patients who received treatment for any duration (93%) or for at least 12 weeks (91%) had HCV RNA below the lower limit of quantitation (LLOQ) at the time of transplantation. Among those with undetectable HCV at transplantation, 64% maintained viral suppression at 12 weeks post-transplant.

People who did not experience HCV recurrence had undetectable viral load for a median of 95 days before transplantation compared with just 5.5 days for those who did have a recurrence. Only 1 patient had a recurrence after having undetectable HCV for 30 days or more.

Sofosbuvir/ribavirin was generally safe and well tolerated in this difficult-to-treat population. There were 11 serious adverse events – none of which were considered related to sofosbuvir – and two discontinuations due to adverse events (3%), as well as seven cases of grade 4 laboratory abnormalities. Three people died before transplantation and five afterwards. The most common side-effects were fatigue (38%), anaemia (23%) and headache (23%).

"Sofosbuvir + ribavirin treatment prior to transplantation prevented HCV recurrence in the majority (64%) of patients who were HCV RNA <LLOQ at transplant," the researchers concluded. "The number of consecutive days with HCV RNA [undetectable] prior to transplant appears to be the strongest predictor of post-transplant virological response."

These results, Curry said, are a "vast improvement" over current treatment. But it is not yet possible to answer an audience question about whether it might be advisable to delay transplantation in order to take sofosbuvir for longer prior to transplantation.

The second study, by Michael Charlton of the Mayo Clinic and colleagues, looked at sofosbuvir plus ribavirin for treatment of established HCV recurrence after liver transplantation.

This open-label phase 2 study included 40 participants in France, Germany, New Zealand, Spain and the US. Again, about 80% were men, most were white and the median age was 59 years. More than 80% had HCV genotype 1 (including 55% with 1a), 15% had genotype 3, one had genotype 4 and none had genotype 2. Most (88%) were treatment-experienced and one-third had the IL28B CC variant.

Participants had undergone liver or combined liver and kidney transplants between six months and 12 years (median four years) prior and did not experience organ rejection or have signs of decompensation. Forty per cent had cirrhosis in the engrafted liver while 23% had bridging fibrosis (Metavir stage F3) and 35% had mild-to-moderate fibrosis (stage F1-F2).

Participants were treated with 400mg once-daily sofosbuvir for 24 weeks. They also started with a low 400mg dose of ribavirin which was gradually increased based on tolerability (determined by haemoglobin levels).

HCV again declined rapidly after starting therapy. At week 4 and at the end of treatment all participants had undetectable viral load. Four weeks after completing treatment 77% had early sustained virological response (SVR4). This is a promising result, but too early to determine a cure as relapse has been seen after this point in other sofosbuvir studies.

No baseline factors were found to predict which patients would relapse, including HCV genotype, IL28B status, prior treatment or extent of fibrosis. Charlton noted that the average ribavirin dose was "almost identical" for responders and non-responders

There were six serious adverse events (15%) and two (5%) that led to treatment discontinuation. There were no deaths, cases of graft loss or episodes of rejection. The most common side-effects were fatigue (28%), headache (25%), joint pain (23%) and diarrhoea (23%). There were 11 grade 4 laboratory abnormalities (28%); 15% developed anaemia and several required erythropoietin, blood transfusions or ribavirin dose reduction.

No interactions were reported between sofosbuvir and any immunosuppressant agents including tacrolimus (used by 70%), mycophenolate mofetil (35%), prednisone (28%) or cyclosporin (25%), though four people did increase their tacrolimus does while on sofosbuvir.

Based on these findings, the investigators concluded, "Sofosbuvir + ribavirin is a potential all-oral therapy for treatment of HCV infection following liver transplantation."