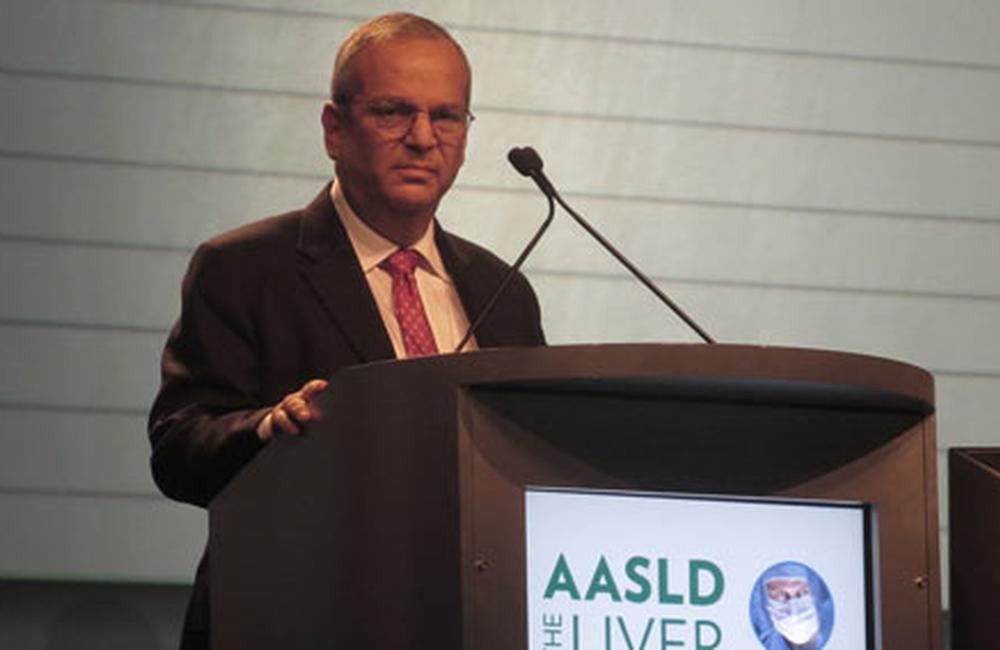 Ira Jacobson, of Weill Cornell Medical College, speaking at The Liver Meeting 2013. Photo by Liz Highleyman, hivandhepatitis.com
This article is more than 9 years old. Click here for more recent articles on this topic

A 12-week all-oral combination of simeprevir plus sofosbuvir led to sustained virological response in 93% of genotype 1 prior null responders with mild-to-moderate liver fibrosis, working as well as a longer course of treatment or triple therapy including ribavirin, according to late-breaking findings from the COSMOS trial presented yesterday at 'The Liver Meeting 2013', the 64th annual meeting of the American Association for the Study of Liver Diseases (AASLD) in Washington, DC.

The advent of next-generation direct-acting antivirals (DAAs) has been described as a revolution in the treatment of chronic hepatitis C virus (HCV) infection. While the first of these new agents will initially be approved as add-ons to interferon-based therapy, people with hepatitis C and their clinicians are eagerly awaiting interferon-free regimens.

Multiple DAAs developed by several major drug companies have performed well in all-oral regimens in trials to date, but their effectiveness varies based on a bewildering array of factors including HCV subtype (1b vs 1a), host IL28B gene pattern ('CC' vs non-'CC'), prior treatment status (untreated, relapser, prior partial or null responder) and extent of liver damage (absent, mild or moderate fibrosis vs advanced fibrosis or cirrhosis).

About 60% of participants in Cohort 1 were men, 29% were black and the median age was 56 years. Just over three-quarters had harder-to-treat HCV subtype 1a, and half of these had the Q80K resistance mutation at baseline. Only 6% had the favourable IL28B 'CC' gene variant associated with good interferon responsiveness – typical of null responders. About 40% had stage F0-F1 fibrosis while 60% had F2.

In Cohort 2, two-thirds were men, 9% were black and the median age was 58 years. Again 78% had subtype 1a, 40% with the Q80K mutation. Participants were about evenly divided between treatment-naives and null responders, and 21% had the favourable 'CC' variant. Just over half had advanced fibrosis, the rest cirrhosis.

Jacobson presented results from a planned interim analysis. Cohort 1 started earlier and had long enough follow-up to determine sustained virological response at 12 weeks after completing treatment (SVR12), which is considered a cure. Cohort 2 started later and had 4-week post-treatment follow-up results (SVR4), which is too soon to declare them cured as relapses could still occur.

All participants treated for 12 weeks completed therapy in both cohorts. In Cohort 1, about 87% treated for 24 weeks finished therapy. Two people in the dual therapy arm and three in the triple therapy arm stopped early, one in each arm due to adverse events. More than 90% of Cohort 2 participants treated for 24 weeks were still in treatment or follow-up; again one in each arm discontinued due to adverse events.

All Cohort 1 participants who completed therapy had undetectable HCV RNA at the end of treatment and no viral breakthroughs occurred. Amongst those treated for 12 weeks, 93% taking simeprevir/sofosbuvir and 96% taking simeprevir/sofosbuvir/ribavirin achieved SVR12. There was one relapse in each regimen arm. Amongst those treated for 24 weeks, SVR12 rates were 93% and 79%, respectively. There was one relapser and four people with 'non-virological failure' in the ribavirin arm.

In Cohort 2, all 14 participants who completed therapy had undetectable end-of-treatment viral load with no breakthroughs. One hundred per cent of both treatment-naive patients and null responders taking simeprevir/sofosbuvir who had adequate follow-up (seven of each) achieved SVR4, as did 100% of naive participants and 93% of null responders (all but one) treated with simeprevir/sofosbuvir/ribavirin.

In both cohorts, 100% of people with HCV subtype 1b or with subtype 1a but lacking the Q80K mutation achieved SVR12 or SVR4. Three relapsers in Cohort 1 and one in Cohort 2 had subtype 1a with the mutation (SVR12 of 89% and SVR4 of 91%, respectively).

The most common side-effects were fatigue, headache, nausea and insomnia, which occurred with similar frequency in both the ribavirin-sparing and ribavirin-containing arms. Anaemia and elevated bilirubin, however, were more common amongst ribavirin recipients.

Based on these findings the researchers concluded that treatment with simeprevir plus sofosbuvir, with or without ribavirin, resulted in high SVR12 rates (79 to 96%) in HCV genotype 1 null responders with stage F0-F2 fibrosis, as well as high SVR4 rates (96 to 100%) in treatment-naive and null responder patients with stage F3 fibrosis or F4 cirrhosis.

Addition of ribavirin to simeprevir and sofosbuvir "may not be needed to achieve high rates of SVR in this patient population," they added. "12 weeks of treatment may confer similar SVR rates compared with 24 weeks of treatment."

Given last month's recommendation for approval of both simeprevir and sofosbuvir by a US Food and Drug Administration advisory committee, Jacobson was asked about the prospect of using these drugs together off-label as an interferon-free regimen, especially for patients with advanced disease who need treatment now but cannot tolerate ribavirin.

"It's difficult to provide definitive guidance," Jacobson replied. "But all of us want to help our patients, and it's not difficult to imagine extrapolating from these data."

Jacobson IM, Ghalib RM, Rodriguez-Torres M et al. SVR results of a once-daily regimen of simeprevir (TMC435) plus sofosbuvir (GS-7977) with or without ribavirin in cirrhotic and non-cirrhotic HCV genotype 1 treatment-naive and prior null responder patients: the COSMOS study. 64th Annual Meeting of the American Association for the Study of Liver Diseases, Washington DC, abstract LB-3, 2013.