Major UK study shows rise in HIV testing, but only a quarter of gay men tested in previous year 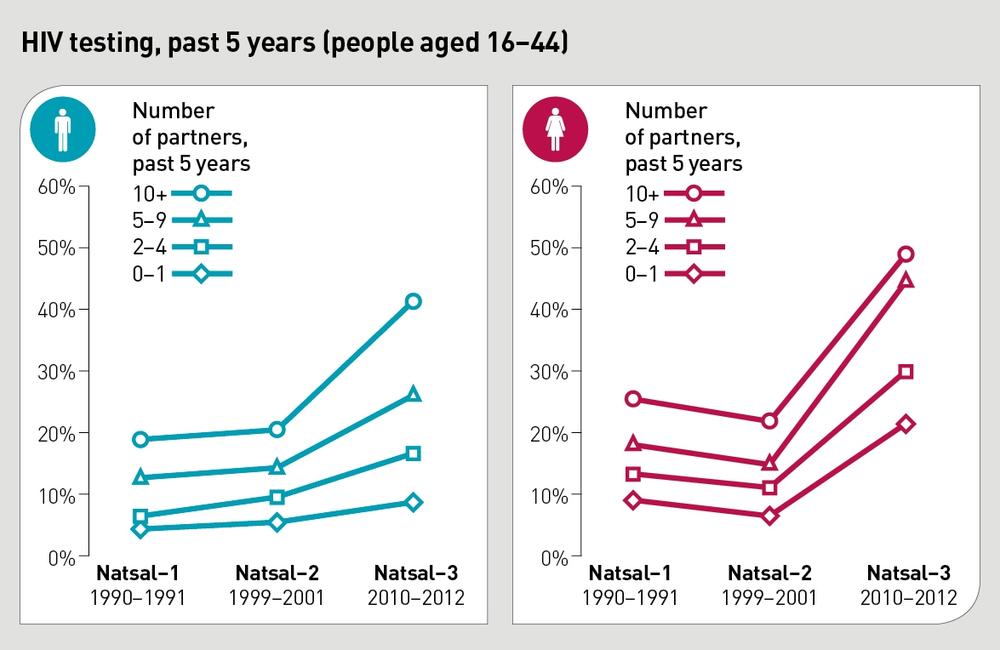 Infographic by Paulo Estriga / Wellcome Trust
This article is more than 9 years old. Click here for more recent articles on this topic

Data from three, large representative samples of the UK population over the last two decades show a significant rise in the uptake of HIV testing, especially among men who have sex with men (MSM), individuals with more sexual partners and African people. Nonetheless, in each of these target groups, half of those questioned had not taken an HIV test in the past five years, showing how far the UK needs to go in order to reduce rates of undiagnosed HIV.

The figures are among those published from the National Survey of Sexual Attitudes and Lifestyles (Natsal) in The Lancet this week. As this study recruited a large, representative sample from households throughout Great Britain, it is more likely than most other studies to give an accurate picture of HIV testing behaviours across the population.

Sexual health researchers typically recruit samples of people who are in contact with specialised sexual health services or who attend locations associated with particular sections of the population (e.g. gay bars). The National Survey of Sexual Attitudes and Lifestyles is one of the only studies that has had the financial resources and political backing needed to enrol a representative sample of the wider population. An individual with no identifiable risk factors for HIV is as likely to be recruited as a person with multiple risk factors.

In 2010 to 2012, interviewers approached people aged 16 to 74 years who were living in households across England, Scotland and Wales. Two-thirds of those who were contacted agreed to take part, with 15,162 individuals completing the survey. The sample was statistically adjusted so that it matched the profile of the population in the country’s census in terms of geographical spread, age and gender (e.g. slightly fewer men than women had been recruited).

Respondents took part in hour-long interviews, with sensitive questions about sexual health being asked on a self-completed computer survey, to ensure confidentiality.

Although the survey is cross-sectional (it doesn’t follow individuals over time), it has now been conducted on three occasions – in 1990, 2000 and 2010. A total of 45,199 people have taken part in the three studies, providing a unique insight into changing sexual behaviour over more than two decades. (For an overview of the study's findings, please see another Aidsmap article or infographics on the study website).

Each Natsal study has asked whether participants had taken an HIV test in the previous five years. The number doing so has risen over the years.

In other words, in the most recent survey, half the gay and bisexual men had not tested at all in the previous five years. Moreover, only a quarter (27%) had tested within the previous year.

HIV testing has also gone up among black people, and specifically, among black African people. In 2010, 43.9% of African men and 46.1% of African women had tested in previous five years.

The 2010 survey also provides reassurance that the prevalence of HIV infection remains low in the UK, and largely restricted to individuals with known risk factors for HIV infection.

A sub-set of 4550 respondents were asked to provide a urine sample for anonymised testing of HIV and other infections. (Although testing urine samples for HIV antibodies isn’t sufficiently accurate for use in clinical practice, it is used in epidemiological research.)

This amounts to nine survey respondents – five of them were men who have sex with men, three were women of black ethnicity, and one was a black heterosexual man. Almost all said they had previously tested for HIV.

While there was a similar picture for gonorrhoea infection, chlamydia was much more commonly found (1.1% of men and 1.5% of women), much of it in individuals who had only had one sexual partner in the previous year. Human papillomavirus (HPV) was the most commonly detected infection, with high-risk strains (16 and 18) found in 15.9% of women.

Whereas epidemiologists already have a lot of data on sexually transmitted infections in people who attend sexual health services, the data from Natsal provide valuable information on the extent of infection in people who don’t attend those services, as well as on risk factors for infection. The data have already been used by Public Health England to refine their estimates of undiagnosed infections in the wider population.