Hepatitis B treatment with entecavir or tenofovir lowers, but does not eliminate, liver cancer risk 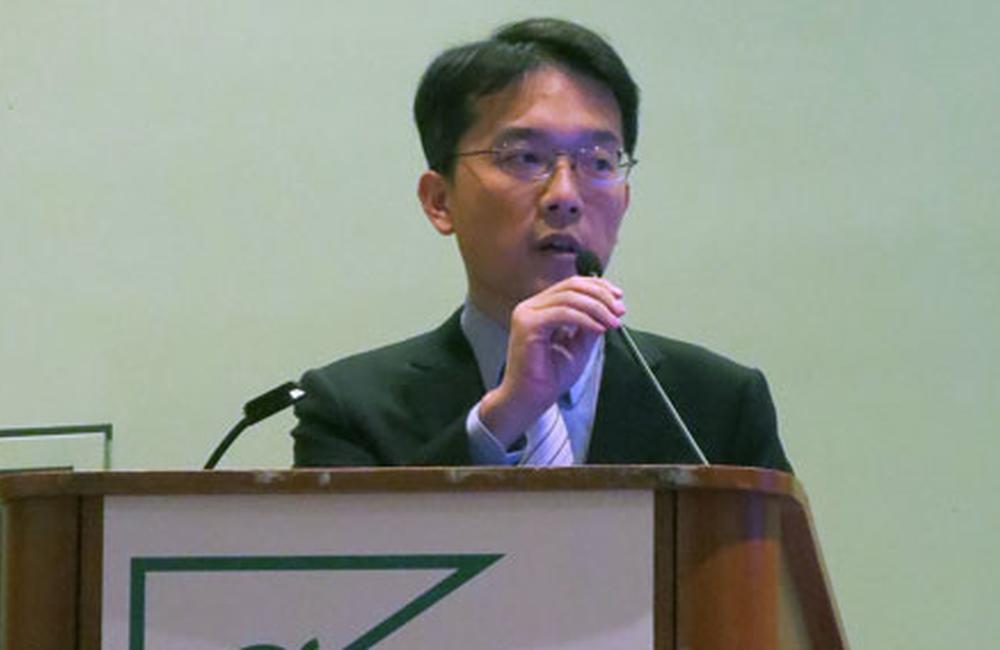 Tung-Hung Su, of National Taiwan University Hospital, speaking at The Liver Meeting 2013. Photo by Liz Highleyman, hivandhepatitis.com
This article is more than 9 years old. Click here for more recent articles on this topic

Long-term treatment with entecavir can reduce the likelihood that people with chronic hepatitis B will develop hepatocellular carcinoma, according to findings presented this week at The Liver Meeting 2013, the 64th annual meeting of the American Association for the Study of Liver Diseases (AASLD) in Washington, DC. Another study, however, found that while entecavir and tenofovir can reduce the risk, people with hepatitis B should continue to undergo regular monitoring for liver cancer and better predictive models may be needed for Caucasian patients.

Over years or decades, chronic hepatitis B virus (HBV) infection can lead to severe liver disease including cirrhosis and hepatocellular carcinoma (HCC), a type of primary liver cancer.

Chronic hepatitis B is treated with oral nucleoside/nucleotide analogues including adefovir (Hepsera), entecavir (Baraclude), lamivudine (Epivir), telbivudine (Sebivo or Tyzeka) and tenofovir (Viread). While these drugs can reduce HBV viral load to an undetectable level, they typically do not eradicate the virus completely and cure hepatitis B; nevertheless, suppressing viral replication lessens disease progression.

The researchers also looked at the effect of treatment on cirrhosis complications including ascites (abdominal fluid accumulation), hepatic encephalopathy, oesophageal or gastric bleeding and bacterial peritonitis (inflammation of the abdominal lining), as well as liver-related death.

This observational cohort study included 666 chronic hepatitis B patients with liver cirrhosis (Child-Pugh stage A, Metavir F4 or Ishak 5) from 17 academic medical centres in Taiwan, followed from 2006 through to March 2013. Participants were on long-term entecavir monotherapy, with entecavir being the first hepatitis B drug they had used. Three quarters were men, the mean age was 55 years and 77% were hepatitis B 'e' antigen (HBeAg)-negative. People who developed HCC within the first year of treatment and those who also had hepatitis C were excluded.

These participants were compared against a historical control group of 621 untreated chronic hepatitis B patients with compensated cirrhosis followed from 1985 through to 1995. In this group, 75% were men, the mean age was 49 years and 75% were HBeAg-negative. Compared with the control group, treated patients were significantly older and had more advanced liver disease.

Overall, a total of 16 cases of HCC were recorded in the entecavir group over an average follow-up period of 2.6 years, while in the control group there were 141 cases over 8.5 years of follow-up.

Looking at the first three years of follow-up, 16 people (2.4%) in the entecavir group and 32 people (5.2%) in the untreated group developed HCC, giving incidence rates of 9.19 and 14.19 per 1000 person-years, respectively, a difference that fell short of statistical significance (p=0.08). Over a lifetime, liver cancer incidence was about 60% lower for entecavir-treated patients (adjusted hazard ratio 0.41).

In a multivariate analysis entecavir treatment was the only factor that significantly predicted increased risk of developing HCC (hazard ratio 0.41; p=0.015). Age, sex, being HBeAg positive or negative and HBV viral load were not significant after controlling for other factors.

Looking at other outcomes over the first three years, entecavir treatment was not associated with decreased risk of cirrhosis complications including hepatic encephalopathy (two new cases in both the treated and control groups) and bleeding (10 vs 8 new cases), nor with reduced liver-related mortality (0.2 vs 0.6%, respectively).

However, Su noted, follow-up in the entecavir group is still too short for many of these secondary complications to have occurred and differences may emerge with longer duration.

Based on these findings, the researchers concluded, "Prolonged entecavir therapy possibly reduces HCC development in hepatitis B-related compensated cirrhotic patients and a longer-term follow-up is required to see its impact on cirrhotic complications."

In a related study, George Papatheodoridis from Hippokration General Hospital of Athens and colleagues looked at risk factors for liver cancer among Caucasian hepatitis B patients treated with entecavir or tenofovir.

Prior research has shown that hepatitis B patients treated with lamivudine, with or without adefovir, may still develop HCC, but entecavir and tenofovir – the current first-line drugs – are more potent with a higher barrier to resistance.

This analysis included 1231 adults with chronic hepatitis B at seven hepatology centres in Greece, Italy, the Netherlands, Spain and Turkey. The majority (72%) were men, the mean age was 52 years and 86% were HBeAg-negative. Two-thirds were non-cirrhotic, 30% had compensated cirrhosis and 4% had decompensated cirrhosis. People with HCC diagnosed before treatment and those with hepatitis C, hepatitis delta or HIV co-infection were excluded.

Participants received entecavir (43%), tenofovir (55%) or both (2%) for at least 12 months. Prior to this, half had taken other nucleoside/nucleotide analogues and one third had developed resistance to them.

A total of 52 patients (4.2%) developed HCC during follow-up, occurring a median of 17 months after starting entecavir or tenofovir. The overall five-year HCC incidence was 51 total cases, or 13.5 per 1000 person-years.

Incidence varied by disease severity, however. Cumulative probability of HCC at one year rose from 0.8% among people without cirrhosis to 2.5% among those with compensated cirrhosis and 11.6% among those with decompensated cirrhosis. At three years, corresponding probabilities were 1.2, 5.8 and 23.8%, respectively, rising at five years to 2.5, 20.9 and 29.7%. The likelihood of developing liver cancer also rose with age, especially for people over the age of 60.

In a multivariate analysis, the significant risk factors for developing HCC among people with cirrhosis were older age, liver decompensation and use of prior antiviral drugs before entecavir or tenofovir. Among non-cirrhotics, the only significant factor was low platelet count (<100,000).

"Data from this large multicenter study in predominantly Caucasian patients indicate that the HCC risk remains increased in [entecavir or tenofovir] treated chronic hepatitis B patients, particularly those with advanced disease," the researchers concluded.

"The applicability of HCC risk scores developed in Asians seems to be modest in Caucasian chronic hepatitis B patients," they added, recommending that different risk score should be developed for this group.

Papatheodoridis G et al. Risk and risk factors of hepatocellular carcinoma (HCC) in Caucasian chronic hepatitis B (CHB) patients with or without cirrhosis treated with entecavir (ETV) or tenofovir (TDF). 64th Annual Meeting of the American Association for the Study of Liver Diseases, Washington, DC, abstract 190, 2013.