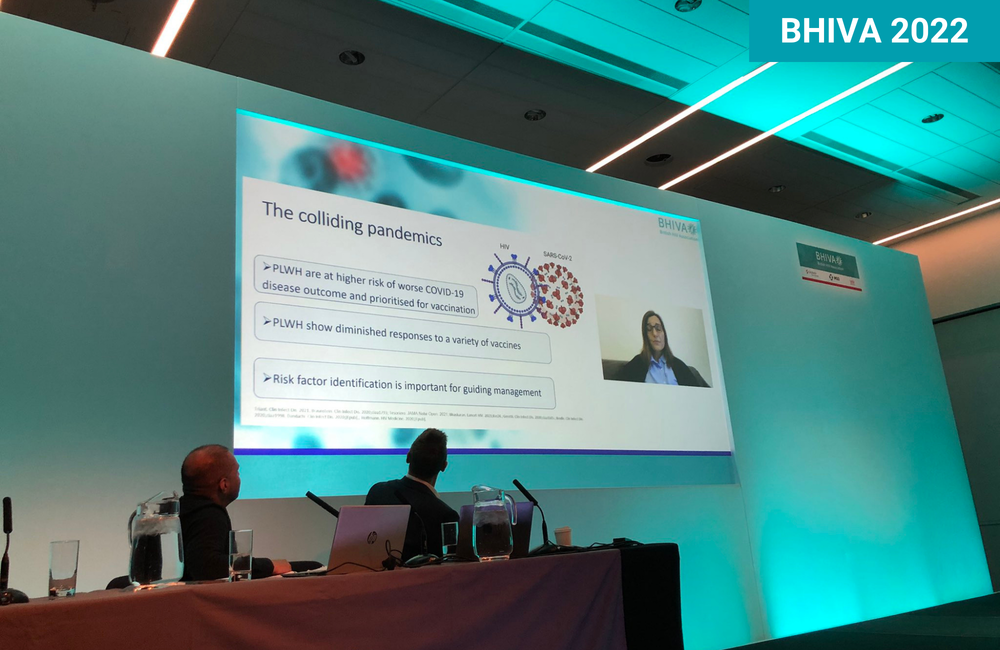 The British HIV Association (BHIVA) recently updated its guidance on COVID vaccinations for people with HIV to align with the recommendation by the UK's Joint Committee on Vaccination and Immunisation (JCVI) that people aged 12 years and over who are immunosuppressed, including all people with HIV, should have a first or second booster dose six months after their last vaccine dose – even if they have already had a previous booster.

This booster should be of one of the two mRNA vaccines made by Pfizer or Moderna, even for people who originally had the Oxford/AstraZeneca vaccine.

Given that three doses were recommended as the original vaccine regimen for people with HIV and other clinically vulnerable people, and that some people with HIV have already had a booster dose this winter, the spring booster could be people’s third, fourth or even fifth COVID vaccine shot.

The efficacy of COVID vaccines in people with HIV

At BHIVA’s spring 2022 conference, immunologist Dr Dimitra Peppa of University College London outlined how our knowledge of the interaction between HIV and COVID-19 had developed over the last two years, and how this has influenced vaccine recommendations, including the latest one.

She said that we now knew enough to say that people with HIV in general did have a somewhat raised risk of developing severe COVID-19 disease if infected, and that their immune responses both to COVID vaccines, and to infection with the SARS-COV-2 virus that causes COVID, could be weaker than in other people.

However, the risk of disease and of poor response to vaccinations was mainly concentrated among people with low CD4 counts or unsuppressed viral loads.

However, a study of people with HIV who received the Oxford/AstraZeneca vaccine, published last year, found there was no difference in the magnitude or persistence of antibody responses in people with HIV versus people without HIV. And a follow-on study by the same team published six months later found that there had been a decline in both antibody and T-cell mediated immunity but that the decline had not been faster in people with HIV.

T-cell immunity is important because it is generally more durable than antibody-based immunity, and the vector vaccines such as the Oxford/AstraZeneca and Johnson and Johnson ones may stimulate a broader T-cell response than the mRNA vaccines. T-cell responses may also be less specific than antibody ones, so may preserve their potency against ‘variants of concern’ like Omicron that escape antibody-mediated immunity. Perhaps because of this, the Oxford team found a better T-cell response to vaccines among people who appeared to have immunity to other coronaviruses preceding SARS-CoV-2.

An interesting study from KwaZulu Natal in South Africa, where HIV prevalence is extremely high, looked at immune responses to SARS-CoV-2 infection in people with and without HIV. It found that people with HIV actually had a stronger CD8 T-cell response to SARS-CoV-2 infection than HIV negative people, and, in people with undetectable viral load on ART, milder COVID disease, possibly because of more, and more varied, prior exposure to other coronaviruses. However HIV-negative people had stronger antibody responses.

The crucial effect of very low CD4 count and severe immune suppression in general in impairing immune response to vaccines is becoming clearer. One December 2021 study from the US looked at the incidence of SARS-CoV-2 infection in people with and without HIV who received the Pfizer, Moderna or Johnson and Johnson vaccine. Seven months after vaccination, 2.1% of HIV-negative and 2.6% of HIV positive people had had ‘breakthrough’ infections. Incidence in people with CD4 counts below 350 was 3.4% and in people with a detectable viral load it was 3.3%.

Posters at this month’s BHIVA conference highlighted by Dr Peppa (see references below) did tend to confirm that severe immune dysfunction impairs vaccine response. One (Ferrari et al) found that in 259 people with HIV, the magnitude of COVID vaccine T-cells responses in people with CD4 counts below 250 was only 5% as high as it was for people with higher CD4 counts.

Boosters: staying one step ahead of the COVID variants

But boosters help, even, or especially, for people with significantly impaired immune systems. Another poster at BHIVA (Vergori et al) looked at the vaccine response in 216 people with HIV who had been diagnosed very late, with a median CD4 nadir (lowest-ever count) of 46. All were now virally suppressed on antiretroviral therapy. After their third dose of one of the mRNA vaccines – a median of 4.7 months after their second dose – they had strong antibody responses regardless of their CD4 count.

Again, however, it is the T-cell responses to SARS-CoV-2 variants that may be more important than the antibody ones. In another study published in January, prior mRNA vaccination or prior COVID disease provided extensive immune coverage against Omicron. In fact mRNA vaccination provided even better coverage than prior infection, with effective CD4 and CD8 responses in 91% of recipients.

However, both of these studies were in the general population. Dr Peppa presented unpublished data from her group which compares the immune response to Omicron induced by a third booster shot of mRNA vaccine in people with HIV and in people without HIV.

This begs the question: what if people with HIV are, as it were, “one shot behind” HIV negative people? Would four shots give them the same immunity against variants as three shots for HIV-negative people?

Because few people with HIV have had four shots yet, we don’t yet have much data, either in terms of number of recipients or follow-up time. But we do have some data from Israel, the first country to start giving people a fourth vaccine dose.

A paper published this month followed what happened to people in Israel “over 60 who were eligible” (which includes immunocompromised people) in the four to six weeks after they received their fourth dose. The number of cases of confirmed COVID infection was half what it was in the three-dose group four weeks after vaccination, though this protection waned in later weeks. However, protection against severe illness did not wane during the six weeks after receipt of the fourth dose, with people who received a fourth booster 3.5 times less likely to develop severe COVID disease than people who did not.

It was on the basis of this study and of the unpublished work of immunologists like Dr Peppa that the JCVI issued their new recommendation, which is supported by BHIVA.

What we still don’t know

Above all, of course, access to and takeup of vaccines for unvaccinated people is still unsatisfactory and has to be improved, especially in the low-income world.