Why aren’t older people tested for HIV? Views from doctors and patients 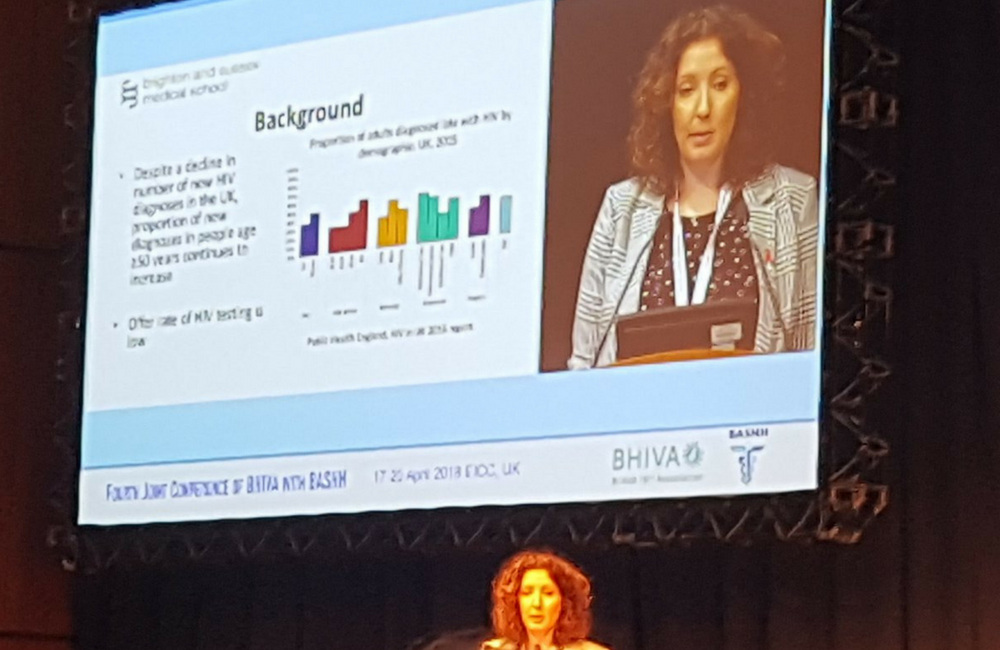 Limited knowledge of HIV and stereotypes about who may have HIV are barriers to HIV testing in people over the age of 50, with similar issues affecting both clinicians and older people themselves, according to a pair of qualitative studies presented to the recent joint British HIV Association (BHIVA) and British Association for Sexual Health and HIV (BASHH) conference in Edinburgh.

One in five new HIV diagnoses in the UK are in people over 50. However, this age group are more likely than others to be diagnosed at a late stage, with a CD4 cell count below 350 cells/mm3. Overall, 42% of diagnoses are late, rising to 57% and 63% among those aged 50 to 64 years and over 65 years respectively. Those diagnosed late tend to have more complex treatment and poorer health outcomes.

Improving the uptake of HIV testing in older people is therefore important. To better understand the situation from two different perspectives, Dr Elaney Youssef of the Brighton and Sussex Medical School and colleagues conducted semi-structured interviews with both doctors and older people living with HIV.

The clinicians were not working in sexual health but had all seen an older patient with undiagnosed HIV and had failed to offer them an HIV test. The older people had all had missed opportunities for HIV testing as they had all recently been diagnosed at a late stage.

Twenty hospital consultants, working in a range of non-HIV specialisms, took part. Twelve worked in Brighton or another high-prevalence area, all in the south east of England. GPs were also approached, but proved to be impossible to engage in the research.

Almost all acknowledged that their knowledge of HIV was outdated and had not been updated since early in their career. The little time that was available for training was focused on their own specialist area of medicine.

Stigma and stereotyping had an impact on the decision to offer a person an HIV test. “Clinicians tended to hold in their mind an idea of the kind of person who might be at risk of HIV,” Youssef said.

This usually included gay men and injecting drug users, but older people were generally seen as being less at risk. Older people might be imagined as being asexual or just ‘more sensible’, she said. Older people who did have HIV were assumed to have acquired it – and had it diagnosed – several years before.

The clinicians interviewed were not necessarily working in departments where routine HIV testing would be recommended (even in a high prevalence area), but could be expected to offer an HIV test when a patient had a symptom or condition that could potentially be linked to HIV (an indicator condition).

However, they tended only to consider HIV in ‘unusual’ cases, for example when people did not respond to treatment or had recurrent symptoms. Younger patients were more likely to be perceived as having an unusual case, whereas older people were expected to be unwell or to have co-morbidities that would complicate their treatment.

Youssef said that clinicians usually started with the most likely causes of a symptom, focusing on those within the realms of their own speciality. Even when they were aware of the list of indicator conditions in HIV testing guidelines, many felt that some of these were far too common in older people to warrant testing for HIV. One endocrinologist in a low prevalence area said:

“Dementia’s quite tricky, thinking about it, all of my patients have got dementia, so which ones am I gonna screen then?”

They were also uncomfortable discussing HIV testing, especially with older patients. Many felt that their patients would be offended and feel judged if an HIV test were offered.  According to a cardiologist in a low prevalence area:

“Most of them tend to look completely appalled, and think that you’re accusing them of being a drug addict or a sex maniac or something like that.”

Discussing HIV testing was seen to be more challenging if it was not perceived to be directly relevant to the appointment or if the clinician was much younger than the patient.

During interviews, the clinicians made a number of suggestions that could encourage them to test more appropriately, including:

And what do older people think? Interviews were conducted with 20 people, aged between 52 and 80 years, who had been diagnosed with HIV in the previous three years. All had been diagnosed late, with a CD4 cell count below 350 cells/mm3. Seven were men who have sex with men, seven were heterosexual men and six were women. In terms of ethnicity, 16 were white and four were black.

The early HIV/AIDS campaigns (such as the ‘Don’t Die of Ignorance’ tombstone campaign) shaped people’s beliefs and behaviours. Heterosexual men and women often had had no other exposure to HIV-related information. Many had misconceptions about HIV and did not know where they could test. A white heterosexual man said:

“I never put myself in a category to ever come into contact with HIV, so I’d never educated myself on HIV. I didn’t feel the need to, cause I was never at risk as far as I was concerned.”

Respondents often attributed their symptoms to something else and did not consider HIV as a possible cause, as this gay man explained:

“I just assumed it was a very bad cough. I mean I think prior to that I’d had a cold and rather foolishly I just thought I was getting older and that’s perhaps what happens when you get older, you don’t shake things off in the way you do when you’re younger.”

All the respondents believed that older people were at lower risk of HIV. They were also aware of clinicians’ perceptions:

“I don’t fit into the demographic, do I? I’m not a young, I’m not a gay person, I’m not African, I’m not any of those things am I? … I think they thought I was a middle-aged hypochondriac to be honest.”

All participants perceived an HIV diagnosis in older age to be stigmatising. Women in particular feared social isolation. HIV was often perceived to be a ‘gay disease’ and the light it shed on sexual behaviour could be challenging.

“If you ask my sons who are in their forties, whether they thought their parents still had any sexual activity, they’d be absolutely horrified.”

The respondents had not prioritised their sexual health, but would have accepted an HIV test if offered by a non-judgemental clinician. Many participants felt that primary care was an appropriate place for testing, although many gay men valued sexual health services. Adding HIV to routine blood tests was seen as a helpful approach.

Elaney Youssef concluded that stigma and a lack of knowledge about where to test suggest a need for health promotion with older people. Current sexual health services may need to adapt to better meet older people’s needs.