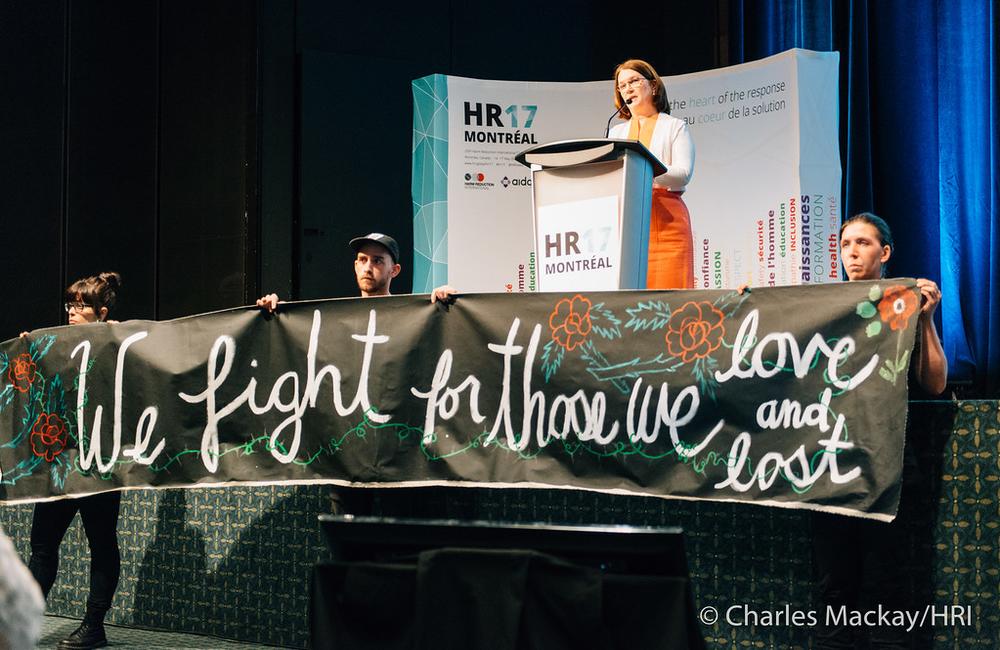 The 25th International Harm Reduction Conference (HR17) in Montréal, Canada, kicked off with a dramatic opening session last week, featuring Jane Philpott, Canadian Minister of Health, along with a group of angry protesters chanting ‘They talk, we die’.

The minister’s speech and the protest focused on the soaring rate of overdose deaths dominating the work of harm reduction organisations across Canada.

Across North America, widespread use of synthetic opioids such as the painkiller fentanyl, and heroin contaminated with illicitly manufactured fentanyl, is leading to dramatic numbers of overdose deaths.

Fentanyl is 50 to 100 times more potent than heroin and is used by illicit manufacturers to intensify the euphoric effects of heroin. For users of street heroin, it is impossible to tell by looking if their heroin is laced with fentanyl.

The minister described the problem as worse than any infectious epidemic in Canada since the Spanish flu killed 50,000 people a century ago. Death rates have exceeded the peak of numbers of people dying of AIDS in the 1990s.

The Minister spoke in detail about her government’s commitment to harm reduction. She pointed to reforms made to speed up the approval of licences for supervised injecting sites, and government support for heroin-assisted treatment for opiate dependency.

For harm reduction advocates from around the world, it was an extraordinary speech. The list of measures she set out to expand harm reduction services across Canada was impressive. Philpott repeatedly endorsed evidence-based approaches over ideologically driven approaches to drug use and talked about equity and justice for people who use drugs. In contrast to the previous Harper government, who removed commitments to harm reduction in policy and practice, Philpott spoke about her commitment to harm reduction and humane measures to address the problems associated with drug dependency.

Prior to becoming a minister in the Trudeau Liberal government, Philpott was a GP for 30 years and spoke about her experience in treating drug-dependent patients. Her distress at the overdose rates was evident, and she spoke about the fentanyl crisis as a dominant feature of her daily life as a Health Minister.

"I think about this from the moment I wake up until the time I fall asleep, and I have poured everything I can into this, and I am determined to work with you as your ally to make sure that we bring an end to this overdose crisis."

But that level of personal commitment was insufficient for many protesters. With backs turned towards the Minister throughout her entire speech, many felt that the measures she outlined were insufficient for the scale of the crisis.

Some critics pointed to a lack of progress on drug law reform, and that the policies set out by Philpott failed to commit the government to address the structural drivers of the overdose crisis.

On law reform, Philpott pointed to the recent passing of the Good Samaritan Act, a new law protecting people who call emergency services in overdose cases from drug possession charges.

But on more substantive law reform measures such as decriminalisation of drug use, Philpott hinted at the possibility of wider drug law reform when she described an initiative to "learn how other jurisdictions address problematic substance use and look at the feasibility of implementing similar legal and policy frameworks here in Canada". She cited Switzerland and Portugal as examples of countries that had reduced drug-related deaths following decriminalisation of drug use.

For an opening session of the International Harm Reduction conference, it was controversial and engaging. For many local activists, the minister is not doing enough. The sense of trauma and distress was palpable – people who are living in communities where friends are dying at an alarming rate.

But for international delegates, many of whom had travelled from countries where harm reduction approaches to drug use are dismissed, undermined or under-funded, or in some cases where supporting harm reduction is downright dangerous, it was extraordinary to hear a national Minister of Health speak about harm reduction and the equal rights of people who use drugs with conviction and compassion.

The controversial opening set the scene for three days of debate and discussion on drugs, drug-related deaths, harm reduction responses and the need for reform.