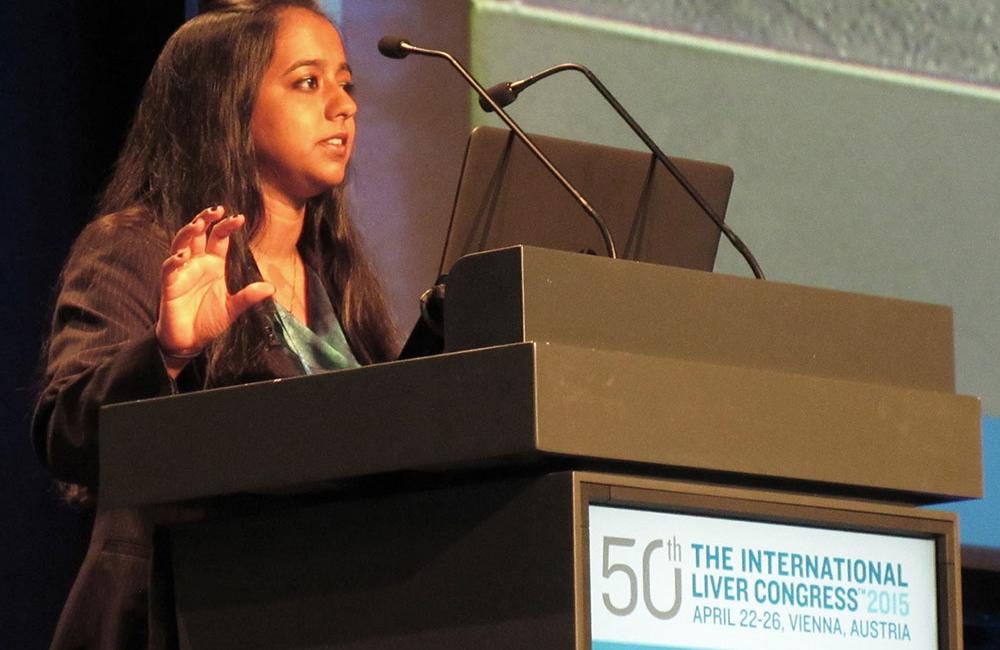 Arpan Mohanty of Yale University School of Medicine. Photo by Liz Highleyman, hivandhepatitis.com
This article is more than 7 years old. Click here for more recent articles on this topic

People with hepatitis and liver cirrhosis were significantly less likely to progress to decompensated disease and less likely to die if they used statins to control blood cholesterol, according to an analysis of US veterans presented at the Digestive Disease Week meeting this week in Washington, DC, and at the European Association for the Study of the Liver (EASL) 50th International Liver Congress last month in Vienna, Austria. Another recent study found that statins were associated with better response to hepatitis C treatment and lower risk of liver cancer.

Over years or decades, chronic hepatitis C virus (HCV) infection can lead to severe liver disease including cirrhosis (when scar tissue replaces functional liver cells and blocks blood circulation) and hepatocellular carcinoma (a type of liver cancer). Some people eventually experience decompensation when the liver can no longer carry out its vital functions, resulting in symptoms such as ascites (abdominal fluid accumulation), bleeding varices (swollen veins) in the stomach or oesophagus and hepatic encephalopathy (brain impairment).

Arpan Mohanty of Yale School of Medicine and colleagues looked at the effects of statin use on decompensation and mortality in people with hepatitis C and compensated cirrhosis.

Statins are used to lower blood cholesterol levels. They have been shown to prevent cardiovascular disease and reduce the risk of heart attack, stroke and death. Statins also have anti-inflammatory effects and some research has found them to be associated with reduced liver fibrosis progression and lower risk of liver cancer.

Studies have also shown that statins can decrease portal pressure – blood pressure in the veins that carry blood from the stomach and intestines through the liver – in people with cirrhosis and to improve survival in people with bleeding varices, the researchers noted as background. However, the long-term effects of statins on decompensation and mortality in people with compensated cirrhosis are unknown.

Mohanty's team retrospectively analysed data from the Veterans Affairs (VA) HCV Clinical Case Registry from January 1996 through December 2009. Out of more than 45,000 HIV-negative VA patients with hepatitis C and compensated cirrhosis, they identified a subset of 1323 eligible statin users seen at outpatient clinics. From within this group, a total of 685 statin users were matched with up to five people with hepatitis C and cirrhosis who did not use statins (n = 2062).

Almost all matched participants were men, half were white, 21% were black and the median age was 56 years. People with HIV or hepatitis B were excluded, as were liver transplant recipients and people recently diagnosed with HCV infection, cirrhosis or liver cancer. Nearly a third had coronary artery disease, more that 80% had high blood pressure, about half had diabetes and two-thirds were smokers. The median duration of statin use was 2.8 years. Propensity scores for matching took into account demographics, co-morbid conditions and variables associated with statin prescription such as blood lipid levels and cardiovascular disease.

Over a follow-up period of more than two years, statin use was associated with a lower risk of both liver decompensation and death compared to non-use (hazard ratio [HR] 0.55 and 0.56, respectively, or about a 45% risk reduction). These associations persisted after adjusting for liver disease variables.

Mohanty noted that only 43% of patients with total cholesterol >200 mg/dl and 65% of those with LDL 'bad' cholesterol >160 mg/dl received statins in this cohort. These high cholesterol levels were traditionally considered indicators for statin therapy, though the latest guidelines from the National Institute for Health and Care Excellence and the American Heart Association and American College of Cardiology base statin recommendations on overall cardiovascular risk rather than specific cholesterol thresholds.

"Statin use is low in patients with cirrhosis, even in those with a high cardiovascular risk," Mohanty said. Until randomised controlled trials are conducted, statins cannot be widely recommended for all people with hepatitis C and cirrhosis, she added, but for patients who otherwise require statins, "their use should not be avoided."

A related study published in the April 6 edition of Hepatology looked at the effects of statin use among US veterans receiving antiviral treatment for hepatitis C.

The researchers identified 7248 eligible hepatitis C patients who received hepatitis C treatment and were followed for at least 24 months after completing therapy. Again, most were men, the group was ethnically diverse, and people with HIV or hepatitis B co-infection or hepatocellular carcinoma at baseline were excluded. Of these patients, 46% received statins.

People who used statins were significantly more likely to achieve sustained virological response (SVR) to antiviral therapy compared to non-users (39% vs 33%, respectively). Statin users were also less likely to progress to cirrhosis (17% vs 25%) or to develop liver cancer (1.2% vs 2.6%).

After adjusting for other relevant clinical factors, statin use remained significantly associated with increased likelihood of SVR (odds ratio [OR] 1.44), as well as a slower fibrosis progression rate, lower risk of progression to cirrhosis (HR 0.56) and lower incidence of hepatocellular carcinoma (HR 0.51).

"Statin use was associated with improved virologic response rates to antiviral therapy and decreased progression of liver fibrosis and incidence of [hepatocellular carcinoma] among a large cohort of HCV positive veterans," the study authors concluded. "These data support the use of statins in patients with HCV."

Mohanty A et al. Statin use and the risk of decompensation and death in Veterans with hepatitis C-related compensated cirrhosis. Digestive Disease Week. Washington, DC, abstract 356, 2015.