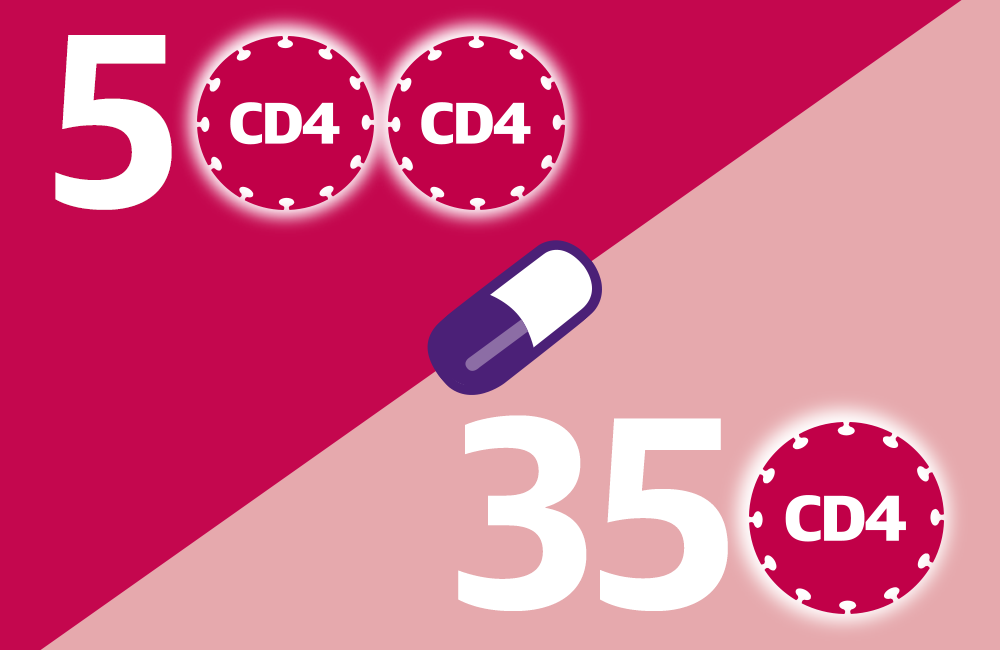 A major international randomised clinical trial has found that people living with HIV have a considerably lower risk of developing AIDS or other serious illnesses if they start taking antiretroviral treatment (ART) sooner, when their CD4 cell count is above 500 cells/mm3, instead of waiting until their CD4 cell count drops below 350 cells/mm3.

These results are likely to have a major impact on international treatment guidelines. The US National Institutes of Health comment in their press release: "Together with data from previous studies showing that antiretroviral treatment reduced the risk of HIV transmission to uninfected sexual partners, these findings support offering treatment to everyone with HIV."

The Strategic Timing of AntiRetroviral Treatment (START) study, was a large-scale randomised clinical trial that tested whether earlier ART benefitted all people with HIV. Its predecessor, the SMART study, had a massive impact when it showed, in 2006, that staying on ART was better than interrupting it. Like the previous study, START has been stopped early. Although it was expected to end in December 2016, an interim review of the study data by the study's Independent Data and Safety Monitoring Board (DSMB) recommended that results be released early.

START, which opened widely in March 2011, was conducted by the International Network for Strategic Initiatives in Global HIV Trials (INSIGHT) at 215 sites in 35 countries. The trial enrolled 4685 men and women with HIV who had never taken ART. They were aged 18 and older, with a median age of 36, and their CD4 counts were all over 500 cells/mm3.

Half of the study participants were randomised to start ART immediately and the other half deferred treatment until their CD4 cell count declined to 350 cells/mm3. On average, participants in the study were followed for three years.

The study measured a combination of outcomes that included serious AIDS events (such as AIDS-related cancer), serious non-AIDS events (major cardiovascular, renal and liver disease and cancer), and death.

Based on data up to March 2015, the DSMB found 41 instances of AIDS, serious non-AIDS events or death among those enrolled in the group starting ART early, compared to 86 events in those deferring it.

This equates to a reduction of 53% in the risk of developing serious illness or death. Concerning AIDS-defining illnesses in particular, the risk reduction was even more pronounced at 70%.

Findings were consistent across sites and the benefits of early ART were similar for people from low-, middle- and high-income countries.

“We now have clear-cut proof that it is of significantly greater health benefit to an HIV-infected person to start antiretroviral therapy sooner rather than later,” said Anthony S. Fauci, Director of the US National Insititute of Allergy and Infectious Disease (NIAID).

He added: “Moreover, early therapy conveys a double benefit, not only improving the health of individuals but at the same time, by lowering their viral load, reducing the risk they will transmit HIV to others. These findings have global implications for the treatment of HIV.”

“This is an important milestone in HIV research,” said Jens Lundgren, M.D., of the University of Copenhagen and one of the co-chairs of the START study. “We now have strong evidence that early treatment is beneficial to the HIV-positive person. These results support treating everyone irrespective of CD4+ T-cell count.”

In light of the DSMB findings, study investigators are informing all participants of the interim results. Participants will be offered treatment if they are not already on ART, and they will continue to be followed until the end of 2016.

More detailed findings are likely to be reported at the International AIDS Society Conference on HIV Pathogenesis, Treatment and Prevention in Vancouver in July.

For more information see the NIH press release and an article in HIV Treatment Bulletin.