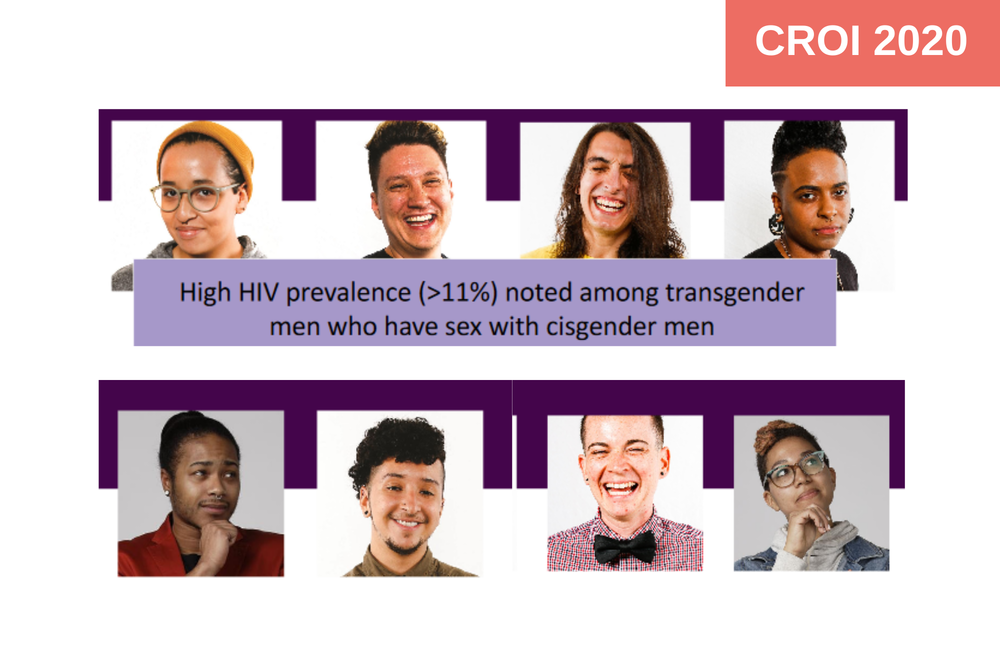 The virtual Conference on Retroviruses and Opportunistic Infections (CROI 2020) this week has included research assessing HIV prevalence, risk, access and adherence to medication in transgender women and men in the United States, Kenya and Zimbabwe.

Transgender women continue to have high rates of HIV infection globally, with an estimated prevalence of around 19%. Although transgender men are often overlooked by researchers as not being at a high risk for HIV infection, some estimates suggest prevalence is as high as 8%.

It is also important to acknowledge the heterogeneity of transgender people and the specificity of their experiences. There is a need to disaggregate different groups (for instance, separating transgender women from men who have sex with men). HIV risk factors for transgender people may include condomless sex and needle-sharing (including for injecting hormones and silicone). Structural factors, including stigma and discrimination, contribute to risk.

Transgender men in the US

Dr Asa Radix presented data on transgender men attending the Callen-Lorde Community Health Center in New York City, which has the largest transgender patient population in the US.

Data was collected on 557 individuals who were assigned female at birth. Their average age was 32; over half were white and 14% were African American; and over half had a bachelor’s degree or higher. Less than half of the sample had ever been tested for HIV.

HIV prevalence was around 3% in those who had tested; transmen who had cisgender male sexual partners had a much higher prevalence rate at 11%. The prevalence rate for African Americans was also higher than the average at 7%. There were much lower odds of being infected with HIV for participants who had a high school degree or higher (adjusted odds ratio 0.08).

Radix emphasised the significant heterogeneity and that it is important to look not only at gender identity, but also sexual orientation and sexual behaviours.

Dr Makobu Kimani of the Kenya Medical Research Institute and colleagues presented data from a PrEP cohort in the coastal town of Malindi. The eleven transgender women and 42 men who have sex with men enrolled reported high levels of condomless sex (72% and 80% respectively).

After six months, 76% of the cohort were still taking PrEP, but while over 40% of the transgender women had protective drug levels, none of the men who have sex with men did.

Interviews revealed that higher adherence among trans women was linked to more agency to take PrEP, perceived awareness of HIV risk and the notion that PrEP affirmed gender identity in some way. One trans participant expressed: “I am also looking healthier and people also tell me I look more attractive.”

Around half the sample were engaged in sex work, an issue that was explored in more depth in a study by Mariëlle Kloek from Erasmus University using data from Zimbabwe.

The study emphasises that there is a diversity of people engaging in sex work who are often overlooked (such as transgender men who have female sex partners) and that the inclusion of sex workers and their partners of all genders is important in HIV research and interventions.

Transgender women in the US

Dr Morgan Keruly from the US National Institutes of Health and colleagues also found a high HIV prevalence rate (29%) for 561 transgender women recruited from six large US cities, including New York, Atlanta and Miami.

Over 50% of the sample had an STI (HIV, hepatitis C, herpes, syphilis, chlamydia or gonorrhoea), with 31% co-infected with two or more STIs. Among the 162 HIV-positive individuals, 31% also had syphilis, 9% had hepatitis C and over a third had two or more other STIs.

Behavioural factors (such as condom use and substance use) were not strongly associated with STIs while city, race and age played a larger role. For instance, cities such as Atlanta and Miami had a higher HIV burden, as did black and Hispanic trans women over the age of 45.

Encouraging outcomes were reported by Dr Catherine Lesko from the Johns Hopkins School of Public Health regarding retention in care for transgender women in the US.

Of 144,054 people living with HIV enrolled in the NA-ACCORD cohort from 2000 to 2016, 420 were trans women. Researchers conducted an analysis for a ten-year period for those who had successfully linked to care (defined as two or more clinic visits in a year). They considered periods of time virally suppressed, on treatment but not virally suppressed, not on treatment, lost to follow-up or dead.

The median age of trans women was 35, nearly half were black and three-quarters had contracted HIV via sexual contact.

This echoed an important point raised by Dr Reisner regarding gender affirmative practices: these are essential to making transgender people feel welcomed and respected. Gender affirmation can range from the social aspect (such as using the correct pronouns), to psychological (feeling that one’s gender is respected), to medical (hormone therapy, gender confirmation surgery) to legal (legal name and gender changes).

It is crucial for research and medical communities to adopt these gender affirmative practices and to work ‘with’ and not ‘on’ transgender communities in order to achieve the best possible health outcomes.

Transgender women have the highest HIV rate in the United States, and new data show which ones are most likely to have favorable outcomes.
POZ
15 Aug 22
More editors' picks