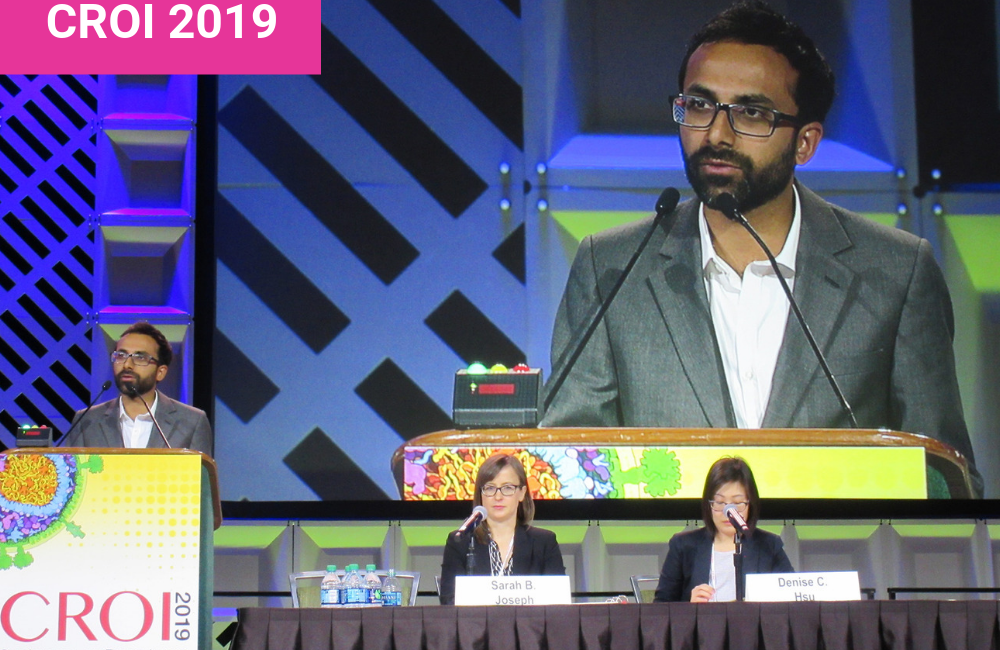 A London man has no remaining detectable HIV a year and a half after undergoing a bone marrow stem cell transplant to treat lymphoma, according to a presentation at the Conference on Retroviruses and Opportunistic Infections (CROI 2019), taking place this week in Seattle.

Professor Ravindra Gupta of University College London presented the case on Tuesday, but after a premature embargo break the day before, many media outlets reported the findings in advance, with some suggesting that the case represents a second HIV cure, similar to that of Timothy Ray Brown, known as the 'Berlin patient'.

Brown – the first and so far only person known to have been cured of HIV – received two stem cell transplants to treat leukaemia in 2006. The donor had double copies of a rare gene mutation known as CCR5-delta-32 that results in missing CCR5 co-receptors on T cells, the gateway most types of HIV use to infect cells. He underwent intensive conditioning chemotherapy and whole-body radiation therapy to kill off his cancerous immune cells, allowing the donor stem cells to rebuild a new HIV-resistant immune system.

As described at the 2007 CROI, Brown stopped antiretroviral therapy at the time of his first transplant but his viral load did not rebound. Researchers extensively tested his blood, gut, brain and other tissues, finding no evidence of replication-competent HIV anywhere in his body. This week Brown celebrated 12 years free of HIV and was at CROI to hear about the 'London patient'.

Other attempts to discontinue antiretroviral therapy in HIV-positive bone marrow transplant recipients have been less successful. Dr Timothy Henrich, now at the University of California at San Francisco, and colleagues attempted to reproduce Brown's cure in two cancer patients in Boston, but in those cases the donors had normal or 'wild-type' stem cells that remained susceptible to HIV, they received less intensive chemotherapy and they stayed on antiretroviral therapy.

After no HIV could be detected in their blood and tissues for years, the men underwent closely monitored treatment interruptions. Although their HIV remained in remission longer than expected – for three and eight months – eventually their virus returned, Henrich reported at CROI 2014. More recently, researchers reported that a bone marrow transplant recipient in Minnesota had viral remission lasting nearly 10 months after an analytic treatment interruption, but he too ultimately experienced viral rebound.

"The work we did involved cells that were susceptible to HIV, but even then we saw a dramatic reduction in the size of the HIV reservoir and a prolonged rebound time, suggesting that the transplant itself can reduce the burden of HIV," Henrich told aidsmap. "But adding this piece where the cells are resistant to the patient's strain of HIV really makes the difference to go the whole hundred yards."

The so-called 'London patient', who remains anonymous, underwent stem cell transplantation to treat Hodgkin lymphoma in May 2016. Like Brown, his donor had a double CCR5-delta-32 mutation.

The man stopped antiretroviral therapy in an analytic treatment interruption 16 months after the transplant. His blood viral load remains undetectable 18 months later using a sensitive assay with a 1 copy/ml limit, no HIV DNA can be found in peripheral CD4 cells and tests showed no "reactivatable" virus in 24 million resting T cells. One blood sample revealed bits of viral genetic material, which may reflect laboratory contamination or defective virus that is unable to replicate, Gupta suggested. Unlike Brown, the London patient has not yet undergone testing for residual HIV in his gut, brain and other tissues.

These findings demonstrate that "the Berlin patient was not an anomaly," Gupta said. What's more, this case shows that remission can happen without harsh conditioning chemotherapy or radiation therapy. While this appears to be the second longest adult HIV remission yet observed, the researchers acknowledge that "it is premature to conclude that this patient has been cured."

Gupta noted that the man's HIV viral load could still rebound. He suggested that two or three years without detectable virus would be enough time to speak of a cure, saying he was "highly confident this will be achieved."

A poster presented at CROI described another case of long-term HIV remission after a stem cell transplant from a donor with a double CCR5-delta-32 mutation. This patient, treated in Dusseldorf, underwent the procedure in February 2013 to treat acute myeloid leukaemia. The man remained on antiretroviral therapy with undetectable viral load until November 2018. Extensive testing showed no viral DNA in his bone marrow, gut tissue samples, rectal tissue samples or lymph nodes. The Dusseldorf patient stopped antiretroviral therapy in November 2018, still has undetectable HIV and is undergoing continued monitoring.

Experts caution that even if CCR5-delta-32 stem cell transplantation can lead to a functional cure of HIV, this high-risk procedure will not be an option for most people.

"This is not a treatment appropriate for people with HIV who do not have cancer," the Treatment Action Group said in a statement. "The hope is that lessons can be learned to help develop more widely applicable therapeutic approaches for attaining HIV remissions or cures."

Stem cell transplantation is life-threatening, with a mortality rate of 10 to 25%. Brown nearly died during the process and was left with lasting side-effects. However, this new case adds to the evidence that using gene therapy to delete CCR5 receptors from T cells may be a feasible approach.

"I think it's getting close to something that should be called a cure," Brown told aidsmap. "I consider him my sibling and I can't wait to meet him."

This report, originally posted on 4 March 2019, has been updated to reflect new information presented at CROI on 5 March.