PrEP use growing in US, but not reaching all those in need 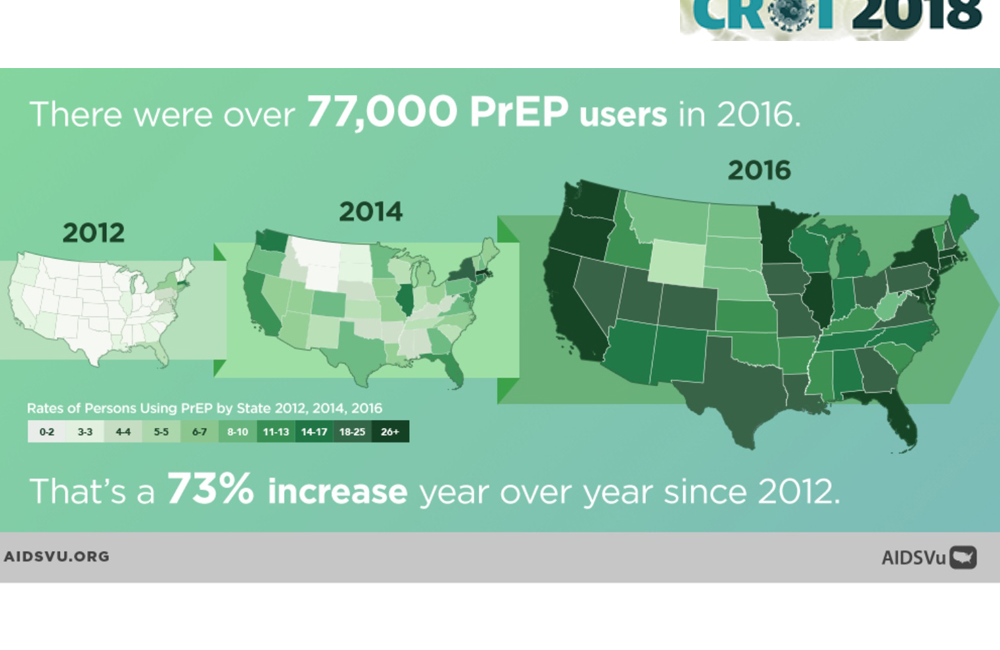 The number of people taking HIV pre-exposure prophylaxis (PrEP) in the United States is steadily increasing, exceeding 77,000 in 2016, according to figures released yesterday by AIDSVu in conjunction with the 25th Conference on Retroviruses and Opportunistic Infections (CROI 2018) in Boston.

But PrEP is only reaching a small proportion of those who could benefit from it. Among the estimated 1.1 million people nationwide who are potential candidates for PrEP, only 8% are receiving it, according to new data from the US Centers for Disease Control and Prevention (CDC). Although African Americans and Latinos make up about two-thirds of people who stand to benefit from PrEP, they are much less likely than white people to be using it.

The US Food and Drug Administration approved Truvada (tenofovir/emtricitabine) for HIV prevention in July 2012. It has been difficult to estimate the total number of people using PrEP because this information is not centrally collected.

For the past several years Gilead Sciences, the maker of Truvada, has been reporting PrEP use estimates based on surveys of commercial pharmacies. At the International AIDS Society Conference on HIV Science last summer, Gilead researchers reported that an estimated 120,000 people had ever started Truvada for PrEP since 2012.

Now, Gilead has teamed up with researchers at Emory University's Rollins School of Public Health to make the latest PrEP numbers available via AIDSVu, an interactive online map of the US HIV/AIDS epidemic.

The new figures presented in AIDSVu show the number of individuals who were prescribed Truvada for HIV prevention during 2016. Anonymous data were obtained from Source Healthcare Analytics (SHA) and compiled by Emory researchers led by AIDSVu principal scientist Patrick Sullivan.

SHA collects data from more than 54,000 pharmacies, 1500 hospitals, 800 outpatient facilities and 80,000 physician practices across the US. It includes prescriptions paid for in cash or by private insurance, Medicaid or Medicare (programmes for low-income people and seniors, respectively) or patient assistance programmes. It does not include PrEP obtained from other sources including demonstration studies, military and veterans' health systems and managed care providers that run their own pharmacies (such as Kaiser Permanente). The CDC estimates that 85 to 90% of PrEP prescriptions are filled at commercial pharmacies.

The data released this week indicate that a total of 77,120 people were using PrEP in 2016, up from 8768 in 2012. This represents a 73% average annual increase, or a cumulative increase of 877% over the entire four-year period. But behind these overall numbers lie some notable demographic and geographic disparities.

In terms of geography, the rate of PrEP use in the Northeast region was around twice that of the West, South or Midwest (47.4, 28.1, 22.6 and 23.5 users per 100,000 people, respectively). Although just over half of all new HIV diagnoses occurred in the south, this region was home to only 30% of PrEP users.

"We hope that the newly available data on AIDSVu will allow health departments, elected officials, medical professionals and community leaders to better understand and visualize the realities of who has access to this important prevention tool so they can develop programs and policies to decrease barriers," commented AIDSVu principal scientist Patrick Sullivan.

In a poster presented at CROI, Sullivan's team looked at the distribution of PrEP users and compared it to the need for PrEP based on where new HIV infections are occurring. Using US census data and HIV case surveillance data from the CDC, they calculated a "PrEP-to-need" ratio, dividing the number of PrEP prescriptions by the number of new HIV diagnoses (both per 100,000 people). A higher ratio means better PrEP coverage for those who need it.

The researchers reported that around 61,300 individuals nationwide had active PrEP prescriptions in the second quarter of 2017, or 23.0 per 100,000 people. (Not everyone who starts PrEP stays on it over time, so the quarterly number is smaller than the annual total reflected in the AIDSVu figures described above.) There were 15.0 new HIV diagnoses per 100,000 people nationwide, giving a PrEP-to-need ratio of 1.5.

States with a higher proportion of people living in poverty, more people without health insurance and those that did not implement Medicaid expansion under the Affordable Care Act – which provides coverage for more people further up the income scale – had lower rates of PrEP usage and lower PrEP-to-need ratios.

"This study estimates that only 5% of the 1.2 million persons indicated for PrEP are potentially receiving PrEP protection, demonstrating a need to scale up PrEP among all groups and in all regions," the researchers concluded.

It is widely acknowledged that African Americans have the highest HIV incidence and lowest PrEP usage rates, but this is hard to quantify because prescription data often do not include information about race or ethnicity.

The Emory team made a rough estimate based on the proportion of African Americans living in a state. They found that states with less than 3% African Americans had a PrEP usage rate of 12.0 and an HIV diagnosis rate of 7.0, yielding a PrEP-to-need ratio of 1.7. In contrast, states with 16% or more black people had a PrEP usage rate of 20.0 and a diagnosis rate of 22.1, for a PrEP-to-need ratio of 0.9.

In another analysis, Dawn Smith of the CDC's Division of HIV/AIDS Prevention presented results of a detailed analysis of PrEP use and need by race/ethnicity, combining data on risk behaviours, new HIV diagnoses at the national and state level, and Truvada prescriptions filled at commercial pharmacies.

The new state-level estimates suggest that 1.14 million Americans were at substantial risk for HIV and eligible for PrEP in 2015 according to CDC guidelines – down slightly from the earlier national figure of 1.23 million. Of these, 44% were black, 26% were white and 25% were Latino. However, only about 90,000 PrEP prescriptions were filled between September 2015 and August 2016, Smith reported.

Approximately 500,000 African Americans and nearly 300,000 Latinos nationwide could potentially benefit from PrEP, but only 7000 prescriptions were known to have been filled for black people and 7600 for Latinos during this period. That is, only 1% of eligible African Americans and about 3% of Latinos were using PrEP. Even with missing racial/ethnic data for about a third of PrEP prescriptions, this reveals a substantial unmet need.

There was a smaller but still considerable gap between the number of white people who could potentially benefit from PrEP (300,000) and the number who received prescriptions (42,000), indicating that just 14% of those eligible were using it.

"African Americans make up nearly half of people who could potentially benefit from PrEP, but by far they are the least likely to have a prescription," Smith told reporters at a CROI press briefing. "After six years, we're nowhere near tapping the full potential of PrEP as a hugely powerful HIV prevention tool."

View the presentation poster (PDF) on the conference website.