MK-8591 to be taken into HIV treatment trials with another new drug, doravirine
Gus Cairns 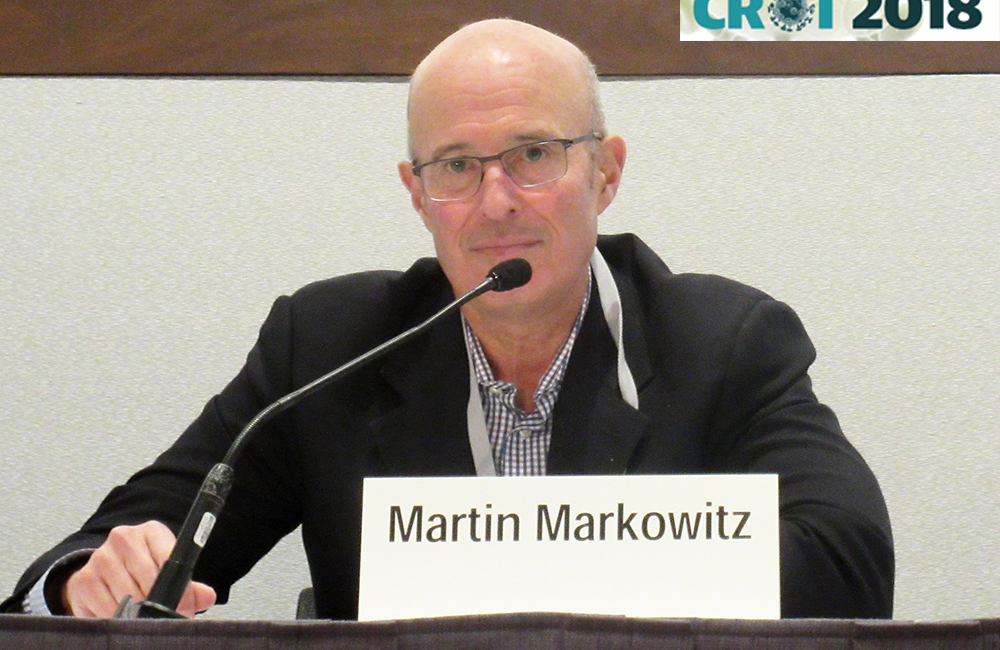 MK-8591 or EFdA is a novel and exceptionally long-lasting and potent HIV drug, being developed by Merck. It is a nucleoside reverse transcriptase translocation inhibitor (NRTTI). Its potency and longevity are due to the fact that it acts at two stages of the HIV lifecycle: as well as blocking HIV from making a DNA copy of its genes that can be inserted into a human cell, it also blocks integrated HIV DNA inside cells from being turned back into viruses.

It also does not get degraded easily by the bodily enzymes that digest molecules: this means its half-life in humans (the time taken for half the drug to leave the body) is 50-60 hours and 120 hours (five days) inside cells. This means it is suitable for weekly dosing.

At last year’s Conference on Retroviruses and Opportunistic Infections (CROI), studies showed that a single dose of MK-8591 of as little as 0.5mg produced HIV viral load drops of at least tenfold in HIV-positive human volunteers (For comparison the daily dose of rilpivirine, one of the most potent current HIV drugs, is 25mg.) In another study, when used as pre-exposure prophyalxis (PrEP), a weekly dose of 4.3 milligrams per kilogram (mg/kg) fully protected a group of eight rhesus macaque monkeys from infection.

However, it now looks as if the effective dose of MK-8591 could be even lower than this, especially for PrEP.

Martin Markowitz of New York’s Aaron Diamond AIDS Research Centre told CROI 2018 that the protection against HIV seen when the original dose was used last year was equivalent to a 41-fold reduction in HIV, in other words about a 97.6% efficacy in reducing SHIV (monkey HIV) infection. In that study, no infections were seen after the monkeys were given 14 oral doses of MK-8591 and challenged with 12 rectal doses of virus. After 24 weeks no monkeys given MK-8591 PrEP were infected while all the animals given placebo were infected within five weeks.

The drug levels seen in the monkeys in last year's study were sufficiently high for the researchers to wonder if a lower dose would also work. The eight rhesus macaques that had received MK-8591 in that study were therefore given six weekly doses of one-third the original amount of drug (1.3 mg/kg) and challenged four times with SHIV. None were infected.

The experiment was again repeated with 0.43 mg/kg (one-ninth the original dose) and again none were infected.

The dose was reduced still further, to 0.1mg/kg or one-fortieth the original dose. At this dose, two out of the eight monkeys became infected with SHIV, one after three challenges and one after four. The other six remained uninfected. Compared with placebo, this represents an efficacy in reducing HIV infections of 86%.

Finally, the experiment was repeated on the remaining uninfected six monkeys using just 0.025mg/kg and four of them became infected, a result statistically no different from zero efficacy.

If these doses are scaled up to humans they are extraordinarily small. In humans, MK-8591 accumulates in tissues more efficiently than monkeys, and its half-life is longer.

Markowitz, therefore, predicted that MK-8591 levels protective against HIV could be achieved in humans at weekly doses of less than 250 micrograms weekly or 10 micrograms daily, suggesting that MK-8591 has considerable potential to be used as extended-dose PrEP against HIV infection.

In another presentation, Merck’s Randolph Matthews said that drug levels measured in human volunteers given daily doses of MK-8591 showed that half the dose used in the initial single-dose safety study presented last year would be more than adequate to suppress HIV as part of a combination antiretroviral therapy.

In a study in which three groups of 12 HIV-negative volunteers were given three different doses of the drug, the lowest drug concentration seen in a volunteer given the lowest dose, 0.25mg, 24 hours after the drug was taken, was well above the lowest dose likely to be therapeutic against HIV, and levels seen in cells after three weeks of steady dosing were eight times that level. Furthermore, when the drug was stopped, its level in cells remained above the therapeutic level for 30 days after the last dose.

Levels of the drug seen in rectal tissue biopsies were similar to, or above, the protective level of tenofovir seen in patients given PrEP at the 0.25mg (250 micrograms) dose and although no vaginal biopsies were done in female volunteers taking that dose, they were above protective concentrations in women give the second-lowest 0.5mg dose.

In short, MK-8591 has considerable potential to become the first HIV drug that could be taken as an oral pill weekly, either as treatment or PrEP.

Randolph Matthews said that Merck is currently investigating MK-8591 in combination with another new drug, the non-nucleoside reverse transcriptase inhibitor (NNRTI) doravirine, in dose-finding studies in people with HIV.