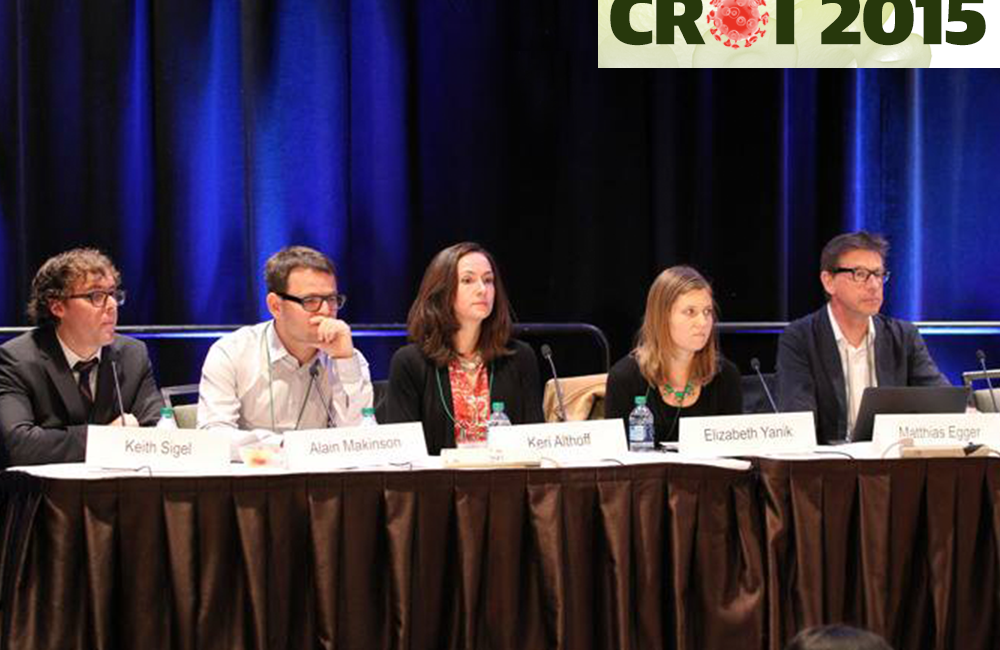 Panel including Elizabeth Yanik and Matthias Egger, at CROI 2015. Photo credit: Robb Cohen www.RobbsPhotos.com.
This article is more than 8 years old. Click here for more recent articles on this topic

Older people living with HIV (over the age of 65) are at greatly increased risk of HIV-associated cancers, although many of the most commonly diagnosed cancers may be related more to ageing than to HIV, according to a study reported last week at the Conference on Retroviruses and Opportunistic Infections (CROI 2015), in Seattle, USA.

“In our study population, over the course of five years, more than 10% of people with HIV had a cancer diagnosis. This is reflecting the contributions of both ageing and HIV to cancer risk in this population,” said Elizabeth Yanik from the US National Cancer Institute, who presented the study findings during a thematic discussion on cancers in young and older people living with HIV.

The relative contribution of these cancers to the overall burden of cancer in people with HIV has been changing, though. Since the era of antiretroviral therapy (ART), opportunistic infections and AIDS-related cancers have been decreasing in incidence – although NHL is still the most common cancer in people living with HIV. The trends for other HIV-associated cancers have been more variable, however. Recently, lung cancer and Hodgkin’s lymphoma appear to be declining in incidence, while the incidence of liver and anal cancer seems to be increasing. In addition, the population with HIV is ageing, and the incidence of certain cancers increases greatly with age.

While most of these data come from industrialised countries – because of the availability of good cancer registries – there is some evidence that these trends are similar in developing regions of the world. During the session, Matthias Egger from the Universities of Bern and Cape Town presented data from five cohorts of South African children with HIV linked with cancer registries, identifying high numbers of KS and NHL and lower rates of non-AIDS-related cancers. Encouragingly, the risk of these cancers was about 70% lower among children on antiretroviral therapy.

Cancer among older people living with HIV in the US

One would expect that most of the older people living with HIV in the US would be on antiretroviral therapy and thus have a reduced risk of cancer, but according to Yanik's study, the incidence of HIV-associated cancers remains exceedingly high.

The study looked at cancer incidence among people living with HIV and the HIV- negative population in the US between 2002 and 2009. To do this, the researchers took a 5% population sample of people using Medicare – the national health insurance programme for people aged 65 and older in the US – which was linked to all cancer cases diagnosed in individuals aged 65 or older identified through the Surveillance, Epidemiology, and End Results (SEER) cancer registry. HIV diagnoses were identified through Medicare claims and cancer diagnoses were identified through the linked cancer registries. The 5% Medicare sample contained over 450,000 people, roughly 0.08% of whom had an HIV diagnosis.

The study found an elevation in cancer risk for many of the same cancer types that have been associated with HIV in younger populations – although the increased risk was somewhat lower than observed in younger populations, particularly for NHL (which in general is found more commonly among the elderly). This was also partly due to the differences in the distribution of specific subtypes. HIV-related NHL subtypes, such as Burkitt lymphoma and diffuse large B-cell lymphoma, were more strongly associated with HIV, whereas in the general population 25% of NHL cases were of other specified subtypes that are not closely linked with HIV.

Overall, the total cancer incidence in this population was substantial: 10.2% of the older people with HIV had a cancer diagnosis within a five-year period. Given the increased risks of cancer associated with both ageing and HIV, Yanik and colleagues concluded that there is a clear need for cancer prevention and screening efforts in people living with HIV.

There was some debate over whether the risk of prostate cancer is truly decreased or whether there is simply less prostate-specific antigen (PSA) testing of men with HIV. On the other hand, this population sees doctors more often than men in the general population. In the past, the somewhat lower risk of prostate cancer among men with HIV has been attributed to hypogonadism, or low testosterone, which was more common among men living with HIV – though it is not clear that this association will persist with earlier and more effective antiretroviral therapy.

One potential limitation of the study was that the population of older people with HIV was somewhat younger than the older people in the general population. At the start of follow-up people with HIV were in their late sixties versus the HIV-negative people who tended to be in their early seventies. If anything, this suggests that the study would tend to underestimate the elevated cancer risk in people living with HIV.

The study also could not collect data about how long people had had HIV or their history of immune suppression or antiretroviral therapy. With earlier and more effective antiretroviral therapy, it is possible that the incidence of the HIV-associated cancers, at least, could be greatly reduced.