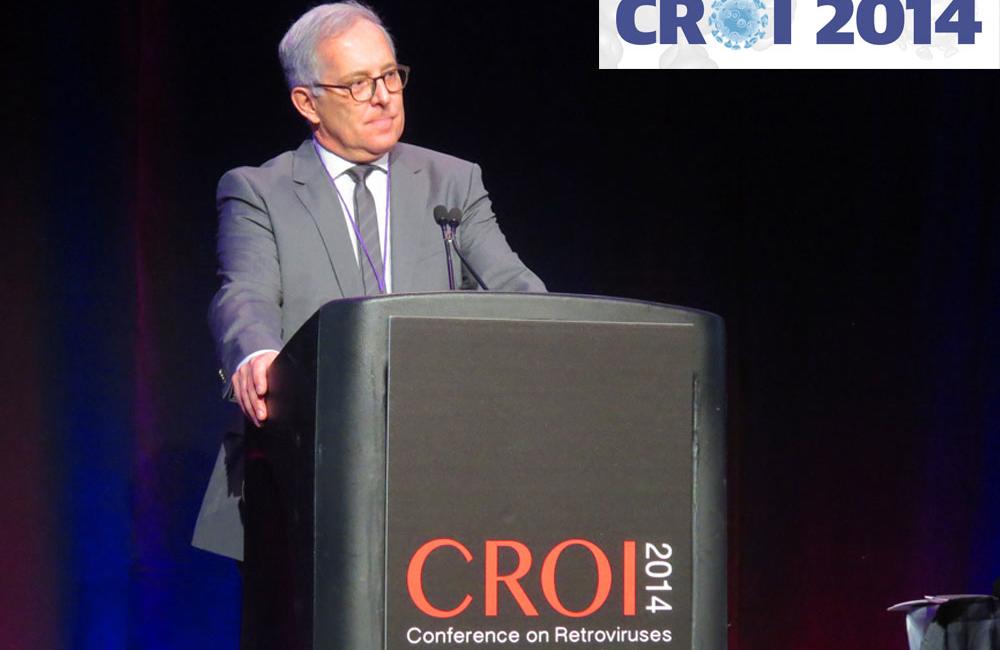 François Raffi of University Hospital in Nantes, France, presenting at CROI 2014. Photo by Liz Highleyman, hivandhepatitis.com.
This article is more than 9 years old. Click here for more recent articles on this topic

An NRTI-sparing initial regimen of raltegravir (Isentress) plus boosted darunavir (Prezista) worked as well as traditional antiretroviral therapy containing tenofovir/emtricitabine (the drugs in Truvada), according to findings from the NEAT 001 study reported at the 21st Conference on Retroviruses and Opportunistic Infections (CROI) this week in Boston.

HIV treatment guidelines have historically recommended combination antiretroviral therapy (ART) consisting of a pair of nucleoside/nucleotide reverse transcriptase inhibitors (NRTIs) plus a third drug from a different class, such as a non-nucleoside reverse transcriptase inhibitor (NNRTI) or protease inhibitor. NRTIs cause side-effects and toxicities in some patients, however, and the advent of novel antiretroviral classes allows more flexibility to create NRTI-free regimens.

This multicentre, open-label phase 3 study included 805 people living with HIV who had not previously taken HIV treatment, at 78 sites in 15 countries in Europe. Most (88%) were men, 82% were white, 13% were black and the median age was 38 years. Participants were required to have a CD4 cell count of at least 500 cells/mm3 (median about 330 cells/mm3) and no major drug-resistance mutations. Only 4% had hepatitis C co-infection.

Study participants were randomly assigned (1:1) to receive either 400mg raltegravir taken twice daily or the Truvada tenofovir/emtricitabine co-formulation taken once daily, both with 800/100mg ritonavir-boosted darunavir.

Participants were followed for at least 96 weeks. More than 90% of participants in both arms of the study completed 96 weeks of treatment, and most of the remainder were lost to follow-up.

The primary study endpoint was time to treatment failure, using a composite measure of three virological criteria (switching therapy before week 32 due to insufficient virological response, or HIV RNA >50 copies/ml at week 32 or at any time thereafter) and three clinical criteria (death due to any cause, any new or recurring AIDS-defining event or any serious non-AIDS event).

In most cases this was due to viral load >50 copies/ml at week 32 or after. In addition, there were four deaths (three in the raltegravir arm and one in the Truvada arm), eight AIDS-defining events (five and three, respectively) and 14 non-AIDS events (seven in each arm).

The researchers also did a planned sub-analysis looking at the effects of baseline viral load and CD4 cell count. Among people with high viral load (>100,000 copies/ml) at study entry, treatment failure rates were 36% with raltegravir and 27% with Truvada. Among those with low CD4 counts (<200 cells/mm3), failure rates were 39 vs 21%, respectively.

Raffi explained that the CD4 cell count difference was significant (p = 0.02), meaning that raltegravir was inferior to Truvada for people with low baseline CD4 cell counts. People with high baseline viral load also did not do as well on raltegravir, but the difference did not reach statistical significance (p = 0.09) and was largely attributable to patients who had both high viral load and low CD4 count at study entry.

Among participants with virological failure who underwent genotypic testing, 5 out of 28 people in the raltegravir arm had evidence of major resistance mutations (mostly integrase inhibitor resistance) compared with none in the Truvada arm.

In this well-powered, open-label, randomised study, the researchers summarised, "Overall twice-daily raltegravir was well tolerated and had comparable efficacy to once-daily tenofovir/emtricitabine, when co-administered with once daily darunavir/ritonavir, over 96 weeks in first-line antiretroviral therapy."

A clinical pharmacy team managed referrals for PLWH wishing to transition to long-acting injectable cabotegravir/rilpivirine—but only half of the patients ultimately did so.
TheBodyPro
20 Jan 23
More editors' picks