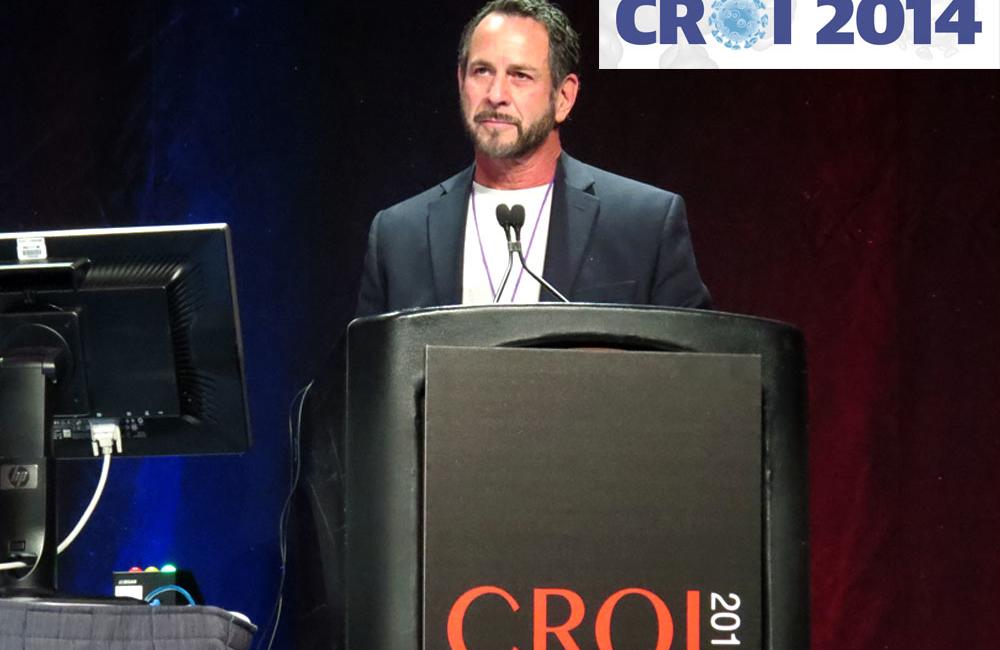 Gary Blick presenting at CROI 2014. Photo by Liz Highleyman, hivandhepatitis.com.
This article is more than 9 years old. Click here for more recent articles on this topic

Pre-treating patients with the cancer chemotherapy drug cyclophosphamide (Cytoxan) promotes proliferation and activity of the modified T-cells, and people receiving the highest dose saw the greatest reductions in HIV viral load, according to a presentation yesterday at the 21st Conference on Retroviruses and Opportunistic Infections (CROI) in Boston. A report in this week's New England Journal of Medicine describes outcomes from the first in this series of trials, including one participant with controlled viral load during an extended ART interruption.

Sangamo developed a technique that uses a zinc finger nuclease to disrupt the gene in CD4 T-cells that controls expression of CCR5, the co-receptor that most strains of HIV use to enter cells.

People with two copies of a naturally occurring genetic mutation called CCR5-delta-32 do not produce this co-receptor and are resistant to HIV infection. A man known as the Berlin patient appears to be free of HIV, seven years after receiving transplanted bone marrow stem cells (which give rise to all blood cells) from a donor with this mutation.

In clinical trials of this approach, samples of CD4 T-cells are collected from HIV-positive participants, treated with the zinc finger protein in a laboratory and allowed to multiply. The modified cells, called SB-728-T, are then re-infused back into the same participant. The idea is that these modified cells – being protected against HIV entry – will persist while normal T-cells are killed off by the virus.

This technique has been tested in several cohorts, including people who have not achieved good CD4 cell recovery despite viral suppression on ART, and people who carry a single copy of the natural CCR5-delta-32 mutation, known as heterozygotes.

The study presented at CROI by Gary Blick from the Circle Care Center in Connecticut evaluated the effect of 'pre-conditioning' with cyclophosphamide prior to re-infusion of modified SB-728-T cells.

The rationale is that killing off some normal T-cells 'makes room' for the altered cells. Used in treatment of cancer and autoimmune diseases, cyclophosphamide enhances homeostatic proliferation of transferred T-cells, increases levels of certain cytokines and promotes migration of new T-cells to lymphoid organs.

This open-label dose-escalation study included 12 participants, all but one men. At study entry they had high CD4 cell counts (500-1300 cells/mm3) and undetectable viral load on a stable ART regimen.

Participants received intravenous cyclophosphamide at doses of 200, 500 or 1000mg/m2 given one to three days prior to a single infusion of approximately 10-40 billion modified T-cells. Six weeks later they started an analytic ART treatment interruption. The interruption was planned to last 16 weeks but could be extended if a participant maintained a viral load below 10,000 copies/ml and a CD4 count above 500 cells/mm3.

Study participants showed evidence of extensive engraftment of bi-allelic modified T-cells. Both total CD4 counts and numbers of modified cells increased in a dose-dependent manner, with the largest gains seen in the 1000mg dose group.

Most participants saw their viral load decrease during ART interruption. One patient in the 200mg group and two people in the 500mg group had HIV RNA declines of nearly 1.0 log. One participant in the 1000mg group saw a drop of 1.9 log. This individual remains off ART with detectable but low and stable viral load.

The researchers noted that the level of bi-allelic modified T-cell engraftment in people taking the 1000mg cyclophosphamide dose was near levels associated with HIV protection in natural CCR5-delta-32 heterozygous individuals.

Cyclophosphamide was generally safe and well tolerated. Some participants experienced nausea, especially at higher doses, but this was successfully managed with anti-emetic drugs. There were no clinically significant decreases in neutrophils, various white blood cells, red blood cells or platelets.

"Cytoxan conditioning may be a useful strategy to maximize the engraftment and anti-viral effects of SB-728-T adoptive T-cell therapy in HIV subjects and may be an important immunomodulatory chemotherapeutic agent for immunotherapy in HIV," the researchers concluded.

Blick explained at a media briefing that the 1000mg dose appeared to approach the threshold for a functional cure, leading the researchers to look at a higher dose of 1500mg to see if they can push up response rates further without unacceptable toxicity. "We can probably get a functional cure if we get enough engraftment," Blick said.

Data from the first phase 1 trial of the SB-728-T approach in humans were published in the March 6, 2014, edition of the New England Journal of Medicine.

In this open-label proof-of-concept study, Pablo Tebas and Carl June from the University of Pennsylvania and colleagues enrolled 12 people living with HIV who had undetectable viral load on ART. They were divided into two cohorts, one with good CD4 cell recovery on ART (>450 cells/mm3), the other with poor immunological recovery (200-500 cells/mm3).

Participants received a single infusion of approximately 10 billion zinc finger-treated autologous or self-donated T-cells, with 11 to 28% of cells successfully modified (cyclophosphamide was not used in this study). Four weeks later, participants in the first group underwent planned ART interruption, while poor CD4 responders remained on treatment.

The median CD4 cell count rose significantly, reaching a median of about 1500 cells/mm3 from the pre-infusion level of about 450 cells/mm3. After one week, the median concentration of CCR5-modified T-cells was 250 cells/mm3, comprising 14% of circulating CD4 T-cells and 9% of circulating peripheral blood mononuclear cells.

Several participants experienced viral load reductions during ART interruption, including one whose HIV RNA became undetectable. This individual was found to be CCR5-delta-32 heterozygous, meaning he naturally had some cells lacking the co-receptor. This participant maintained viral control for 31 weeks without ART and remains off treatment.

The modified T-cells appeared safe in the short term, with just one patient experiencing a transient transfusion reaction with low-grade fever and chills.

In summary, this study showed that modified SB-728-T cells persist and appear to have a selective advantage over unmodified cells when exposed to HIV during ART interruption.

"Our experience reinforces our belief that an immunological approach is a promising approach to enable functional control of HIV infection and eliminate the need for lifelong ART," June said in a press release issued by Sangamo.

The release also noted that the company has developed a new process to deliver the zinc finger nuclease using mRNA instead of an adenovirus vector, which will allow recipients to be retreated if necessary.