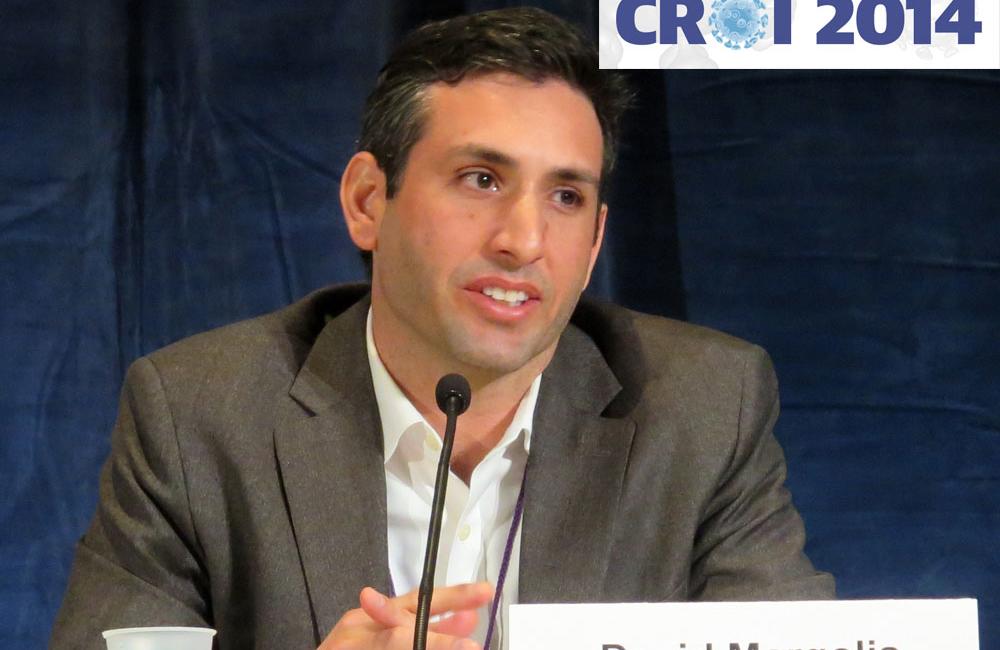 David Margolis presenting at CROI 2014. Photo by Liz Highleyman, hivandhepatitis.com.
This article is more than 8 years old. Click here for more recent articles on this topic

An oral combination therapy of two antiretroviral drugs, the non-nucleoside rilpivirine (Edurant, also in Eviplera/Complera) and the new integrase inhibitor GSK1265744 (744), was at least as effective as a standard nucleosides-plus-efavirenz triple combination in keeping viral load undetectable in people taking it, the 21st Conference on Retroviruses and Opportunistic Infections (CROI) heard on Wednesday.

The dual combination was a maintenance therapy. This means patients did not start on it as their first treatment combination, but switched to it after six months on an NRTI-plus-744 combination, as long as they had a viral load under 50 copies/ml. The reason for this is that there has been a raised risk of early failure in rilpivirine-based combinations in people with high viral loads (over 100,000 copes/ml) in some drug trials, so the idea was not to start the two-drug combination until participants in the study had already achieved virological suppression.

The point of doing this study is explained in its title – the Long-Acting antiretroviral Treatment Enabling study, or LATTE for short. Rilpivirine and 744 remain so long in the body that the potential exists for them to be used as injectable formulations that could be administered once a month instead of taking pills. Now we know they are safe to use together as an oral maintenance therapy, there will be a new trial of them as an injected maintenance therapy. The conference heard on Tuesday how an injectable formulation of 744 was being developed for pre-exposure prophylaxis (PrEP).

In the LATTE study, participants were divided into four groups and for the first six months all the groups took triple combination therapy. The four groups took two NRTIs (either tenofovir/FTC, the drugs co-formulated as Truvada; or abacavir/3TC, the drugs co-formulated as Kivexa/Epzicom) and the third drug was either the NNRTI efavirenz or one of three different doses of 744 (10, 30 or 60 milligrams).

If, after six months, participants on this starting therapy had viral loads under 50 copies/ml, then those on 744 exchanged their NRTIs for rilpivirine (25mg). Those taking efavirenz continued taking the two NRTIs.

These results are for the first 48 weeks of the study, i.e. 24 weeks each on the starting and maintenance combinations. The full 96-week results will be presented next year.

There were 243 participants in the study, all but ten of them (96%) men. Thirty-eight per cent were non-white and 16% had an initial viral load over 100,000 copies/ml. Baseline CD4 count averaged 410 copies/mm3. The choice of NRTIs was up to doctor and patient: 69% were taking Truvada and 31% were taking Kivexa/Epzicom.

At week 48, 82% of all participants who started taking 744 (including 24-week dropouts) had a viral load under 50 copies/ml and 71% of participants taking efavirenz. This 11% difference was not statistically significant due to relatively small numbers. The difference was driven entirely by the lower efavirenz viral-suppression results in the first 24 weeks: the proportion of participants who had undetectable viral loads at 48 weeks who continued into the maintenance phase was 94% for efavirenz and 93% for 744.

The lower rates of success for efavirenz in the first 24 weeks were largely driven by discontinuations due to toxicity, particularly this drug’s well-known neuropsychiatric side-effects; 13% dropped out of the efavirenz arm in the first 24 weeks due to toxicity compared with 3% in the 744 arms, and combined with drop-outs due to viral failure, 21% on efavirenz discontinued compared to 8% on 744. The only side-effect that was significantly more common with 744 was headache, which was mainly mild (22% of people taking 744 had headaches compared with 11% taking efavirenz: no participants withdrew from the study for this reason).

These results support a trial of the injectable formulations of rilpivirine and 744 as maintenance therapy (as in LATTE, participants will start on six months of oral therapy).