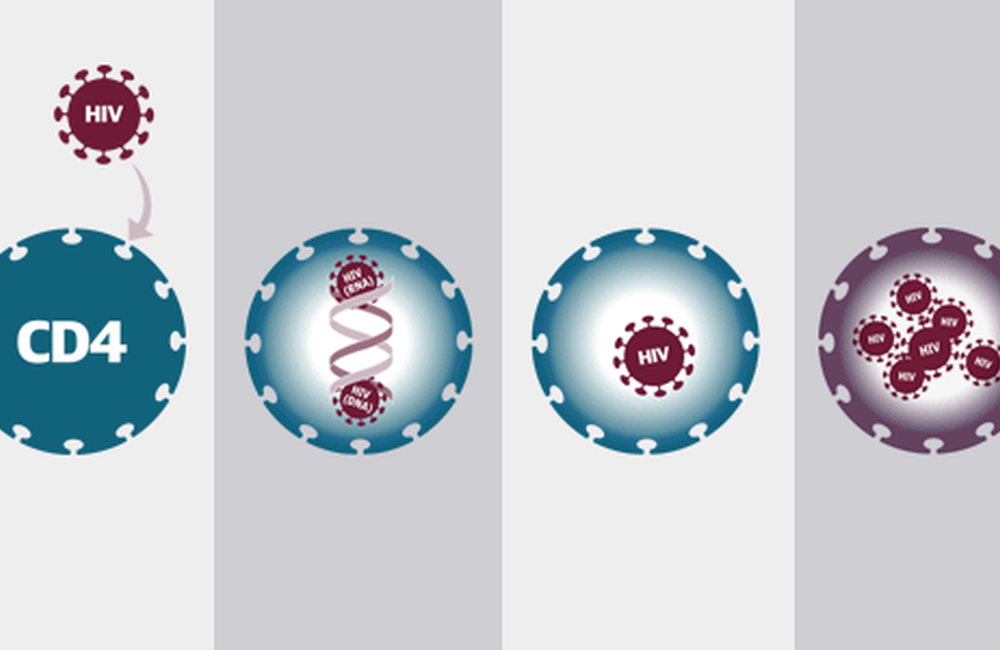 Detail from the NAM leaflet, How treatment works, showing different stages of the HIV lifecycle targeted by antiretroviral drugs. See www.aidsmap.com/thebasics
This article is more than 9 years old. Click here for more recent articles on this topic

Combination therapy using a novel HIV attachment inhibitor demonstrated good safety and effectiveness, offering the promise of a new antiretroviral class that may be particularly beneficial for people with extensive resistance to current drugs, according to a report at the 21st Conference on Retroviruses and Opportunistic Infections (CROI) this week in Boston.

HIV treatment combines medications from different antiretroviral classes that interfere with different steps of the viral lifecycle. But no existing drugs target the very first step, initial attachment of the virus to a vulnerable host cell. CCR5 blockers like maraviroc (Celsentri) and fusion inhibitors like T-20 (enfuvirtide, Fuzeon) work at slightly later steps.

BMS-663068 is a pro-drug that is metabolised in the body to the active agent BMS-626529, which binds to the gp120 protein on the envelope of HIV-1 and blocks interaction between the virus and host cells. BMS-663068 interferes with conformational or shape changes that enable HIV to bind to CD4 cell surface receptors. Unlike maraviroc, BMS-663068 works regardless of CCR5 or CXCR4 co-receptor tropism.

Because of its novel mechanism of action, BMS-663068 has a unique resistance profile and is active against HIV strains that are resistant to other antiretrovirals. An early proof-of-concept study showed that eight days of BMS-663068 monotherapy led to HIV viral load reductions of 1.2 to 1.7 log copies/ml.

This multinational study included 253 treatment-experienced participants with HIV viral load of at least 1000 copies/ml and a CD4 cell count greater than 50 cells/mm3. A majority (about 60%) were men, about one-third were white and the median age was 39 years. The study had sites in middle-income countries including South Africa, raising the proportion of women, non-white people and younger people compared to most antiretroviral drug development trials. Two-thirds had HIV subtype B.

"There's room for this drug in our armamentarium." Jay Lalezari

Participants had rather advanced disease, with a mean CD4 cell count of approximately 230 cells/mm3 and nearly 40% having less than 200 cells/mm3. Many had experienced treatment failure with first- or second-line antiretroviral therapy (ART). About half had HIV which had at least one major mutation conferring resistance to at least one widely used antiretroviral class. However, to take part in the study they were required to have HIV which was still sensitive to raltegravir (Isentress), tenofovir (Viread, also in some co-formulations) and atazanavir (Reyataz). They also underwent screening at baseline to see if their HIV was sensitive to BMS-626529.

A subset of 32 participants took part in an optional lead-in monotherapy sub-study in which BMS-663068 was taken alone for seven days. There was a small rise in HIV RNA around day two, which Lalezari said could be due to the virus accumulating in plasma when it is unable to enter cells. By day eight viral load had decreased by an average of 0.7 to 1.5 log copies/ml.

At week 24, all BMS-663068 arms demonstrated similar efficacy in a modified intent-to-treat analysis: 80% of particiapnts taking 400mg twice daily, 69% taking 800mg twice daily, 77% taking 600mg once daily and 72% taking 1200mg twice daily had a viral load below 50 copies/ml, compared with 75% in the atazanavir control arm. Response rates were higher in an observed or as-treated analysis: 87, 81, 78, 84 and 86%, respectively. Response rates were comparable regardless of baseline BMS-626529 susceptibility. CD4 cell gains were similar in all arms.

BMS-663068 was generally well tolerated at all doses and there were no signals of safety issues. There were a total of 15 serious adverse events and four treatment discontinuations for this reason in the BMS-663068 arms, but none were deemed related to the study drug.

"Through week 24, response rates were similar across all BMS-663068 arms and with atazanavir/ritonavir in treatment-experienced, HIV-positive subjects," the researchers summarised. "BMS-663068 was generally well tolerated across all arms without any dose-response safety signal," they added. "These results support the continued development of BMS-663068."

Lalezari concluded by saying that, as an activist, he wanted to thank Bristol-Myers Squibb for working to bring forth a new HIV drug with a new mechanism of action. "There's room for this drug in our armamentarium," he said.