Early treatment reduces viral reservoirs but does not prevent rebound 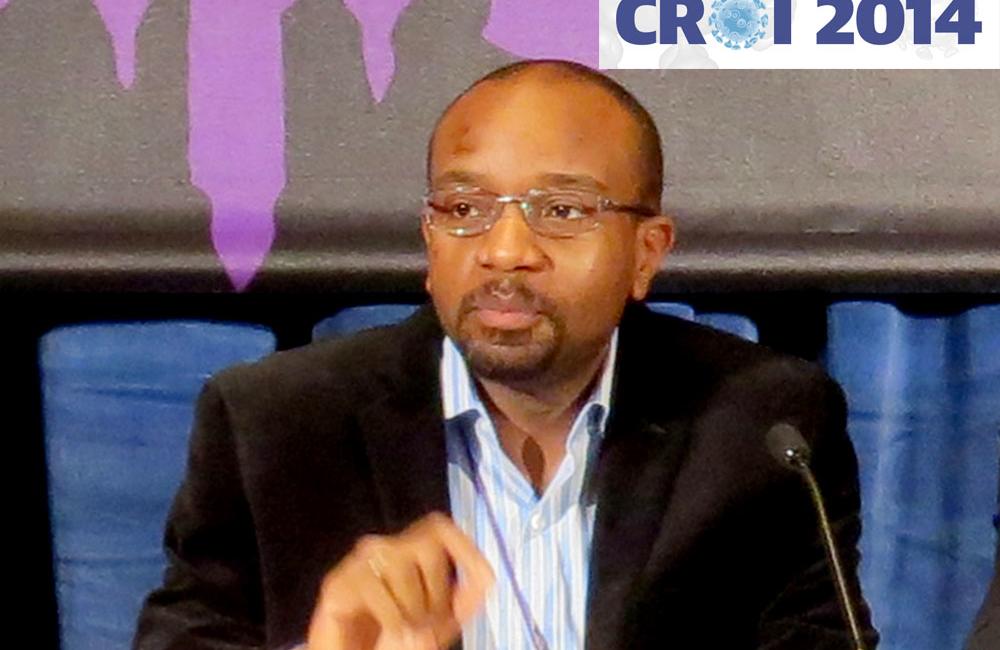 Afam Okoye, from the Vaccine and Gene Therapy Institute in Florida and the Oregon Health and Science University, presenting at CROI 2014. Photo by Liz Highleyman, hivandhepatitis.com.
This article is more than 9 years old. Click here for more recent articles on this topic

Antiretroviral therapy started during the first several days after infection limited dissemination of an HIV-like virus throughout the body and establishment of cellular and tissue reservoirs in monkeys, but it did not prevent the virus from coming back after stopping treatment, according to research presented at the 21st Conference on Retroviruses and Opportunistic Infections (CROI) earlier this month in Boston.

Afam Okoye and colleagues from the Vaccine and Gene Therapy Institute in Florida and the Oregon Health and Science University looked at the effect of early treatment on viral reservoirs in rhesus macaque monkeys infected with SIV – a primate virus similar to HIV – when antiretroviral therapy (ART) was started either prior to peak viral replication, at or near the time of peak viral replication, or during early chronic infection.

From the very earliest stages of infection, HIV replicates and 'seeds' itself in cellular reservoirs including long-lived memory T-cells as well as anatomical reservoirs such as the brain and gut. As part of the research towards a cure for HIV, researchers have explored whether antiretroviral drugs started very soon after infection can limit this process.

A group of people living with HIV in France, known as the VISCONTI cohort, appear to be controlling HIV on their own after interrupting ART that was started during very early infection, and a baby started on treatment within about 30 hours after birth shows no signs of ongoing infection despite being off ART for 2 years.

These and other cases suggest that reservoirs established early during acute infection – prior to peak viral replication – "may be quantitatively and qualitatively different from those established later in chronic infection and perhaps be more amenable to cure," the researchers noted as background.

Previous research in monkeys indicated that the size of the SIV reservoir in peripheral blood mononuclear cells (PBMCs) and tissues increases significantly between day 7 and day 10 after infection, and that the viral reservoir seeded during early acute infection is largely made up of CD4 memory T-cells, including central, transitional and effector memory cells.

In this study, monkeys were started on multidrug therapy at day 7 (n=2), day 10 (n=2) or day 42 (n=18) after being intravenously exposed to SIV. ART consisted of tenofovir and FTC (the drugs in Truvada), the integrase inhibitor dolutegravir (Tivicay) and ritonavir-boosted darunavir (Prezista).

Among the 18 monkeys treated later, plasma viral load peaked between 12 and 14 days, and some animals did not achieve complete viral suppression even after 32 weeks of treatment.

Replication-competent virus was undetectable by co-culture in all monkeys started on ART at day 7 or day 10, but detected in all those started at day 42. However, even in monkeys treated early, viral rebound occurred soon after stopping ART, indicating that replication-competent virus is still present. In addition, transferring lymph nodes from infected monkeys treated at day 7 to treatment-naive animals resulted in productive infection, again showing that infectious virus is present.

"Early ART, when initiated prior to peak virus replication, limits systemic virus dissemination and seeding of the reservoir in peripheral and extra-lymphoid mucosal compartments," the researchers concluded.

"A delay as short as three days during the 'hyperacute' phase can result in 1-2 logs higher tissue-based reservoir size, once therapy is started and maintained," they continued. "Reservoirs established during acute infection are capable of inducing rapid viremia in naive animals and viral rebound following ART cessation."

Speaking from the audience, Deborah Persaud from Johns Hopkins – who at last year's CROI first reported on the apparently functionally cured Mississippi baby and this year described another baby in Long Beach who also appears free of HIV, though this child remains on ART – suggested that starting treatment seven days after exposure is perhaps already too late. "This is relevant to perinatal infection, to not just minimize but block establishment of reservoirs," she said.

At a press conference following his presentation, Okoye acknowledged that to achieve the best results, "we may have to treat within 36 hours."