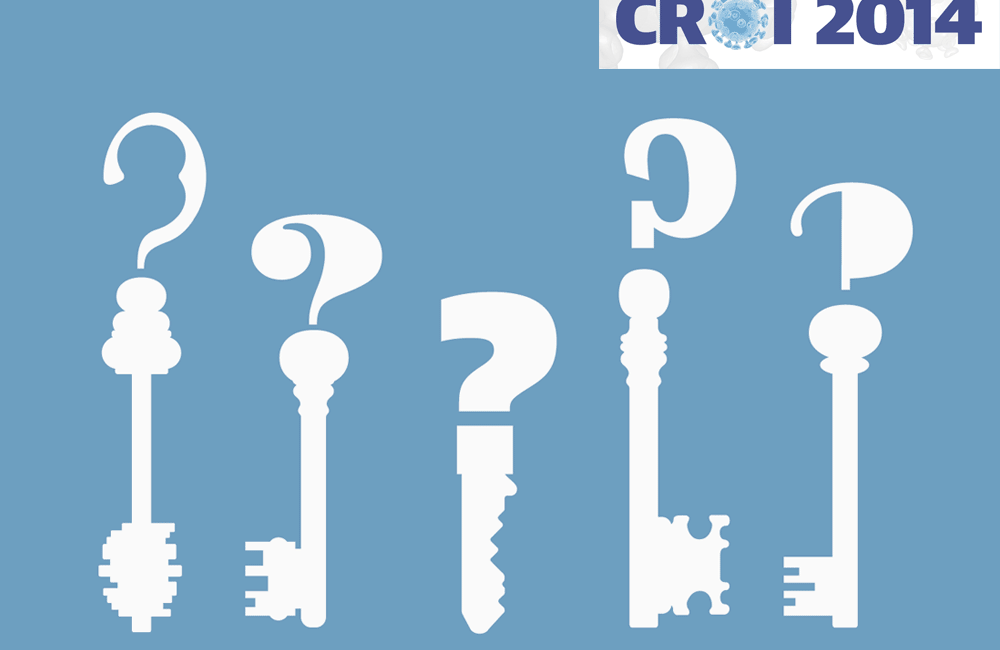 Delegates at the community cure workshop in advance of the 21st Conference on Retroviruses and Opportunistic Infections (CROI 2014) in Boston might have been in a less hopeful frame of mind than they had been seven months previously when, at the International AIDS Society conference in Kuala Lumpur, it looked as if two more people had joined Timothy Ray Brown in being cured of HIV, using a similar bone-marrow transplant technology.

Hopes were dashed when, last December, it was announced that both the so-called “Boston patients” had experienced a return of their HIV after staying virally undetectable off treatment for several months. Detailed results were presented later during the CROI 2014 conference on Thursday, 6th March. The challenge will be to find out where their HIV reappeared from, why it took so long, and how we could eliminate or control the tiny ‘reservoir’ of HIV that remains in such patients.

Paul Sato, of the Office of AIDS Research at the US National Institutes of Health, which is funding AIDS cure research, told the symposium that in the light of the Boston patients’ disappointing results, any “scale-up of relevant eradication strategies and approaches” would be postponed with the focus of cure research swinging back to look at “basic research into the cellular and molecular mechanisms of HIV latency and persistence”.

Where does HIV hide?

Where was the Boston patients’ HIV hiding, given that, as cure researcher Dr Steven Deeks commented in December, it may take “just one virus in one cell” to remain for it to return after antiretroviral therapy (ART) is stopped? It is difficult to find. As the Boston patients’ physician, Dr Timothy Henrich, told the cure symposium, it may simply not be possible for ultrasensitive tests to find the signal of a handful of virally infected cells in someone’s body against the background noise; we may need other ways of deciding whether to risk treatment interruption to see if techniques to purge the body of the reservoir of hidden HIV have worked.

Dr Maria Buzon of the Ragon Institute near Boston told the symposium that the hidden HIV that may still have existed in the Boston patients may be located in so-called T-memory stem cells, a class of persistent, long-lived, self-renewing immune cells, only discovered in 2011, that only form 1-2% of the T-lymphocytes in the body but may contain a disproportionate amount of cells that are HIV-infected. This is particularly the case in patients who are treated soon after infection – or who undergo therapies that aim to purge the body’s reservoir of hidden HIV. The total proportion of immune cells that are infected with HIV is typically ten times lower in such patients, but the proportion that are T-memory stem cells may be much larger – typically up to one third of cells rather than 1%.

At the Kuala Lumpur cure symposium, Buzon had said that T-memory stem cells might be very hard to flush out of hiding with current immune-stimulating therapies.

At Boston, she said there was evidence that the T-memory stem cells in a minority of patients (4 out of 19) had responded to a drug called panobinostat, results from which were announced by Danish researchers last year. The aim of panobinostat and other selective immune simulators is to ‘kick’ quiescent immune cells out of torpor; in doing so, the ones containing HIV genetic material activate, start producing new HIV, and either destroy themselves in the process or become visible to the immune system, which destroys them.

In the panobinostat experiments, while the drug did produce reductions in the overall number of latent ‘central-memory’ cells infected with HIV, in most cases the proportion of cells that were T-memory stem cells increased, because these were not affected by the drug. In four patients, however, there were apparently permanent declines in the number of HIV-infected T-memory stem cells too. We need to find out why these patients responded differently, and whether we can find drugs that will selectively target T-memory stem cells.

Romas Geleziunas of Gilead Sciences told the symposium that the lesson of the Boston patients, and of reservoir-purging drugs like panobinostat that ‘kick’ HIV out of hiding, is that these are unlikely to be sufficient to drive the virus out of the system or produce a functional cure (long-term control of HIV without drugs) by themselves. They would have to be combined with therapies that either delivered targeted toxins to cells (‘kill’) or use a therapeutic vaccine to actively patrol the body and pick off the remaining HIV-infected cells (‘contain’).

He talked about a number of research directions Gilead and other companies are pursuing.

The first is an improved reservoir-purging drug called romidepsin. Like the HDAC inhibitor drugs (panobinostat and relatives), it works by freeing immune system cells from an enzyme that stops genes being active, but works in a different way and produces a much longer burst of activity – 48 hours or more, compared with six hours with panobinostat. This could give the immune system a longer window in which to detect activated, HIV-producing cells and kill them, but it could also be toxic; like the HDAC inhibitor, romidepsin is used as a cancer therapy, and can cause a short-lived but general cytopenia (immune suppression), though the doses used will be lower than those for cancer.

A therapeutic vaccine may be needed to contain HIV infection by picking off the remaining HIV-infected cells as they activate, but, Dr Geleziunas commented, they have not worked as HIV treatments in themselves. This is generally because the immune response they stimulate is ‘too little too late’. HIV has generally already evolved to cope with the response they produce.

Results from last year unveiled at the 2013 AIDS Vaccine conference, however, were exciting, said Geleziunas, a cytomegalovirus (CMV)-based vaccine given to monkeys particularly so, not just because it appeared to produce a functional cure in 50% of the monkeys it was given to (though it is still a mystery why the other 50% did not respond) but also because it produced an immune response of a breadth and persistence never seen before.

A new generation of experiments in monkeys will look at the CMV vaccine as a therapeutic rather than preventive vaccine, by giving it to monkeys after infection with the monkey equivalent of HIV rather than before it, to see if it can contain a mature infection. This vaccine will need cautious safety testing, because it involves a life-long infection, albeit one by a virus engineered to be harmless.

Another reason therapeutic vaccines may not have worked is because the cells they stimulate are unable to enter the parts of the immune system – the sanctuaries in the lymph nodes – where HIV-infected immune cells differentiate and mature.

For this reason, a therapeutic vaccine, as well as stimulating an anti-HIV T-cell response, may need to contain an antibody component. Geleziunas talked about an interesting set of experiments involving an antibody called PGT121 which is the most broadly neutralising antibody yet seen, preventing HIV replication of 98% of strains of HIV. In one experiment, administration of PGT121 to 21 monkeys produced transient viral undetectability in all of them, but in three monkeys – the ones with the lowest initial viral loads – the virus did not return, also producing what looks like a functional cure.

It is a mystery why administering an antibody, which only remains in the body for 2 to 3 weeks, may produce a long-term effect.

Part of the reason may be that the antibodies stimulate another kind of immune response called antibody-dependent cellular cytotoxicity (ADCC). In this, they alert different branches of the immune system than those alerted by cellular immunity.

Most vaccines have an Achilles heel in that they respond to bits of virus displayed on the surface of immune cells, so-called epitopes, and many people’s immune cells only have a limited ability to do this, and one that HIV can adapt to. A new class of so-called ‘bispecific’ antibodies have been found, that respond directly to viral surface proteins and then directly go to immune CD8 cells and stimulate them; this should in theory generate a faster and broader immune response.

Other ‘short cuts’ are being tested. One is a class of drugs called TLR agonists, which aim to generate an immune response by switching on a stronger response not in T-cells but in dendritic cells, the cells that carry HIV from the body’s surface into its bloodstream. These, in turn, sensitise immune cells, in a chain reaction. Gilead is testing an orally dosed TLR agonist called GS9620 in HIV-negative volunteers.

Finally, there is a type of protein called PD-1, which switches on the mechanism that leads immune cells to shut off and become quiescent and therefore invisible to the immune system. Antibodies that block PD-1 or its cellular receptor could, if dosed carefully, stop HIV-infected cells from joining the invisible and inaccessible ‘reservoir’ of occult infection in the first place.

There was some criticism at the cure symposium that some of these approaches are not being pursued fast enough. Cure research, though, may be tricky, as the price of failure may be at least to ‘re-seed’ the reservoir, turning a slowly progressing infection into a faster one; and manipulating the immune system can have unexpected adverse consequences. It is looking as if a cure may be a complex and multi-stage matter for patients – especially people with chronic infection – but many different approaches are being tried.