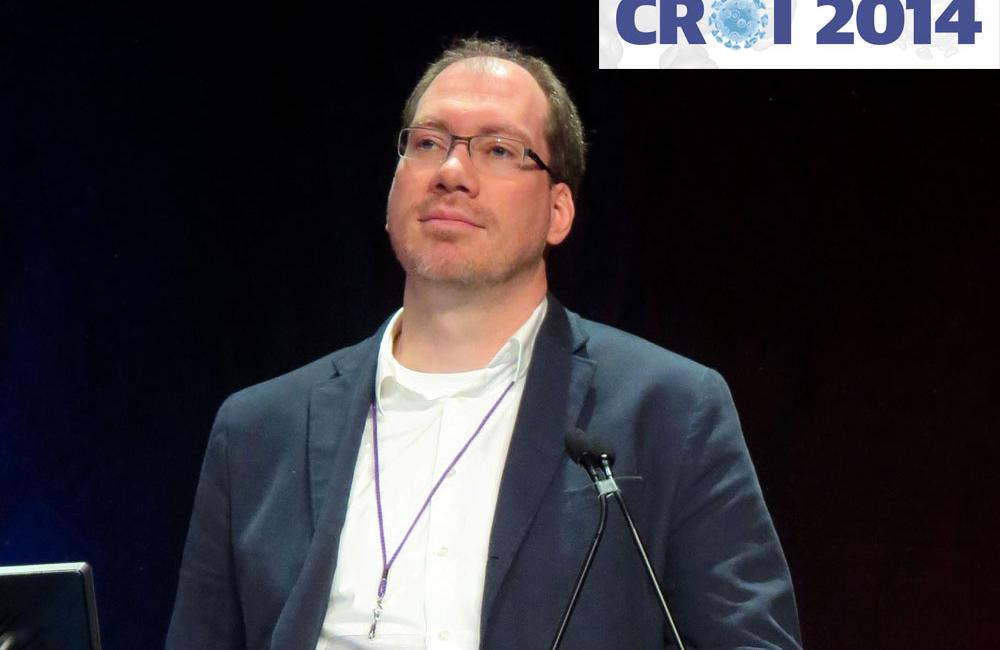 Timothy Henrich presenting at CROI 2014. Photo by Liz Highleyman, hivandhepatitis.com.
This article is more than 9 years old. Click here for more recent articles on this topic

HIV has re-emerged in two Boston men who underwent experimental antiretroviral therapy interruption after receiving bone marrow stem cell transplants for cancer treatment, Timothy Henrich reported yesterday at the 21st Conference on Retroviruses and Opportunistic Infections (CROI) in Boston. These cases suggest that a functional cure for HIV will be difficult to achieve if even a small amount of residual virus remains in the body.

The two men received donor bone marrow containing haematopoietic stem cells, which give rise to all types of blood cells including the CD4 T-cells that harbour HIV. Both men's donors had normal or 'wild-type' stem cells susceptible to HIV infection.

These cases therefore differ from the 'Berlin patient', who apparently remains HIV-free seven years after stem cell transplants from a donor with a double mutation (CCR5-delta-32) that makes cells resistant to HIV entry. However, the Boston patients themselves both carried a single copy of the protective mutation.

Also unlike the Berlin patient, the Boston men received what Henrich called "kinder and gentler" reduced-intensity chemotherapy conditioning regimens that did not kill off all their original immune cells. This enabled them to remain on antiretroviral therapy (ART) throughout the transplant process.

The transplants were successful and the men's own blood cells were progressively replaced by donor cells. Both men maintained viral suppression after the procedure, and frequent and extensive testing over the next few years showed very low levels of HIV. Not only did plasma HIV RNA remain undetectable, but the virus also could not be found in large volumes of peripheral blood mononuclear cells (PBMCs), lymph nodes or gut tissue using the most sensitive assays.

After the men had been apparently HIV-free for 2.6 and 4.3 years, they and their providers agreed to try an analytical ART interruption to see if the virus would return.

At the 2013 IAS meeting, Henrich reported that the men continued to have undetectable plasma HIV RNA and undetectable integrated HIV DNA in PBMCs after 7 and 15 weeks off ART, raising hopes that the stem cell transplant process might contribute to a functional cure.

But these hopes turned to disappointment when Henrich reported last December at the International Workshop on HIV Persistence that the virus had come back in both men.

The first patient experienced HIV re-emergence 12 weeks into his treatment interruption, while the second man did not show signs of HIV rebound until he had been off ART for eight months.

Once HIV was detected, both men experienced rapid HIV replication, reaching viral loads in the millions. Both had detectable HIV in cerebrospinal fluid. They also developed symptoms of acute retroviral syndrome, similar to those sometimes seen when people first acquire HIV.

Both men restarted antiretroviral treatment after viral rebound. One patient had developed a new NNRTI (non-nucleoside reverse transcriptase inhibitor) resistance mutation and switched to a different fully active ART regimen. Both patients were able to regain viral suppression, their symptoms rapidly resolved, their CD4 counts recovered and they are doing well.

"Allogeneic hematopoietic stem cell transplantation can result in loss of detectable HIV-1 from blood and gut tissue and antiretroviral-free HIV-1 remission for variable duration," but "viral rebound occurred despite a reduction in reservoir size...of at least 3 log10," the researchers summarised.

They suggested that long-lived tissue reservoirs that are inaccessible to testing – perhaps including host macrophages which are replaced by donor cells more slowly than T-cells after a transplant – may have contributed to viral rebound.

Virus detected after rebound was genetically similar, suggesting they were clones of only one or a few residual remaining viruses. This implies that even a few remaining HIV-infected cells may be enough to allow full viral rebound once protective ART is stopped.

Speaking at a community cure workshop preceding the conference, Henrich explained that mathematical models indicate that if only one HIV-infected cell remains, the chance of cure is high. If 10 cells remain, viral rebound could take 10 years. If there are 100 residual cells, rebound could still take up to three years.

While these outcomes are disappointing, they shed further light on HIV persistence and how it might be overcome to enable a functional cure without risky stem cells transplants. To date, it remains unclear what factors contributed to temporary HIV remission in these men, what triggered viral rebound, or why one patient was able to remain off ART so much longer than the other.

The researchers saw no increase in the strength of HIV-specific antibody responses prior to viral rebound. The graft-versus-host reaction – in which donor cells attack host tissues – may have played a role in continued surveillance and clearance of residual HIV-infected recipient cells, the researchers suggested. As reported in a related poster, Henrich said that chemotherapy may play some role, "but by itself it doesn't seem to be doing too much."

"Analytic treatment interruption remains the most reliable measure of viral persistence," the researchers concluded. "Defining the nature and half-life of HIV-1 reservoirs is essential in order to achieve durable antiretroviral-free remission."