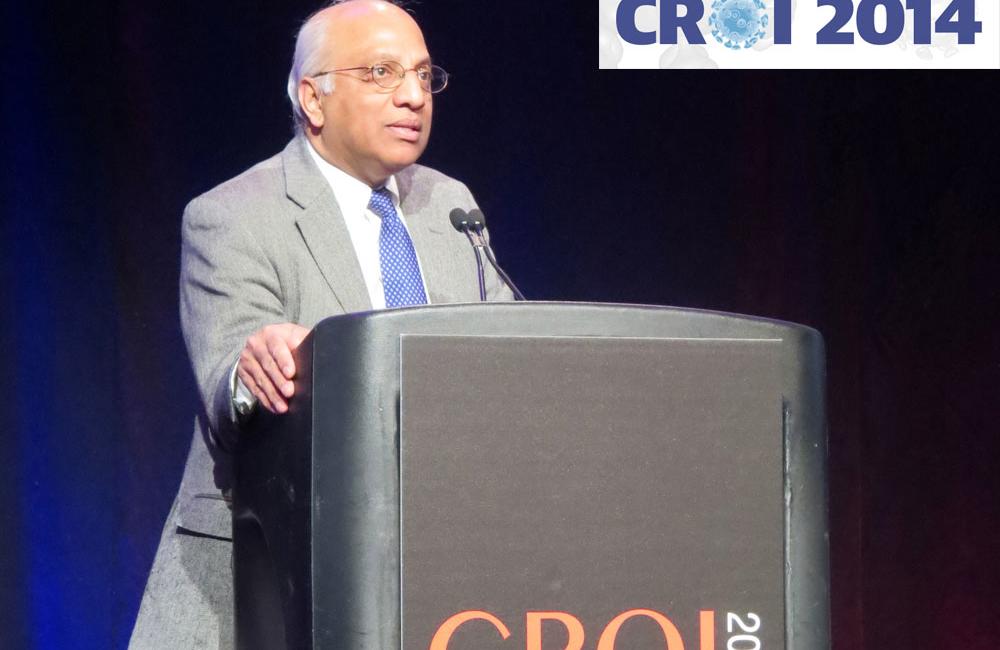 Prof. Rajendar Reddy, of the University of Pennsylvania Hospital, presenting at CROI 2014. Photo by Liz Highleyman, hivandhepatitis.com.
This article is more than 8 years old. Click here for more recent articles on this topic

A 12-week triple combination of direct-acting antivirals developed by AbbVie cured at least 99% of previously untreated people with genotype 1 hepatitis C infection, Prof. Rajendar Reddy of the University of Pennsylvania Hospital told the 2014 Conference on Retroviruses and Opportunistic Infections (CROI) in Boston on Tuesday.

The results came from the PEARL III study, one of the largest of six phase III studies of AbbVie’s direct-acting antiviral combination. AbbVie is one of several companies racing to develop interferon-free combinations of oral drugs that can cure hepatitis C within 12 or 24 weeks.

These are the first results from AbbVie’s phase III development programme to be presented at a scientific conference. AbbVie plans to submit data from the phase III studies early in the second quarter of 2014 for US marketing approval and hopes to gain approval before the end of 2014. European Union approval is likely to follow soon afterwards. The combination will be the first to provide treatment for genotype 1b without the need for interferon or ribavirin, a significant step forward in hepatitis C treatment. Many of the side-effects of hepatitis C treatment are associated with interferon and ribavirin.

Genotype 1b is the most common genotype of hepatitis C globally, and comprises the largest proportion of infections in the European region, Latin America, Russia, Turkey, China and Japan.

The phase III studies compared various durations of treatment with a combination of the HCV protease inhibitor ABT-450 boosted with ritonavir co-formulated with the HCV NS5A inhibitor ABT-267, plus the HCV non-nucleoside polymerase inhibitor ABT-333. These were tested with or without ribavirin, in untreated and previously treated patients, including those with cirrhosis. The completed studies did not include people with HIV and HCV co-infection.

PEARL III recruited 419 previously untreated patients with genotype 1b infection. All participants in PEARL III received the triple combination of direct-acting antivirals (referred to as '3D') and were randomised on a 1:1 ratio to receive ribavirin (n=210) or placebo (n=209). Treatment in PEARL III lasted for 12 weeks.

The study investigators concluded that in patients with hepatitis C genotype 1b, a 12-week course of ABT-450r, ABT-333 and ABT-267 – the so-called '3D' combination – is a highly effective and well-tolerated treatment that can be administered without ribavirin.