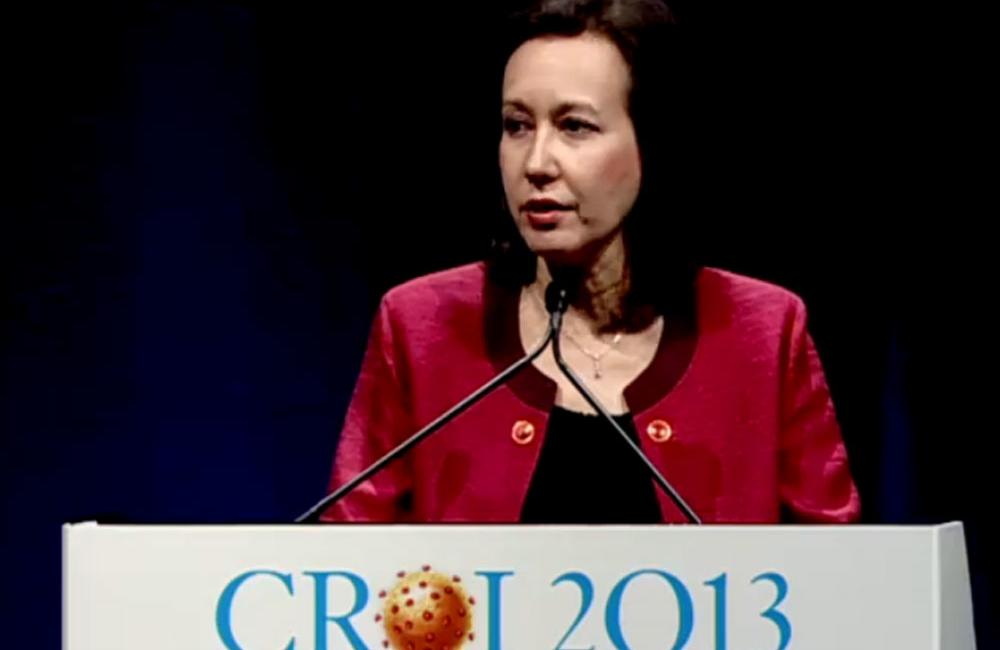 Dr Jintanat Ananworanich of SEARCH Thailand presenting at CROI 2013.
This article is more than 10 years old. Click here for more recent articles on this topic

Very early antiretroviral treatment may limit the size of the HIV reservoir in adults and children, according to studies presented on 4 March at the 20th Conference on Retroviruses and Opportunistic Infections (CROI) in Atlanta.

Other research presented at the meeting suggests that too little is known about either the size or the cell types that constitute the HIV reservoir to be confident that early assessments will be a reliable guide to the potential for viral eradication.

Background: the problem of HIV persistence in the human body

The primary obstacle to the elimination of HIV from the human body is the ability of the virus to persist in a latent form within CD4 cells that are in a resting state. These are cells which become infected with HIV and where the virus is incorporated into the cell’s genetic material (genome), after which the virus remains in a latent state. A variety of triggers can cause the cell to become activated and to begin producing virus, but the virus may remain integrated within the cell, undetected by the immune system, for many years. It is only when the virus begins to reproduce that the cell’s surface will display proteins that cause the immune system to target that cell for destruction.

Latently infected cells form a 'reservoir' of cells that are constantly being activated to produce HIV, which then goes on to establish latent infections in other cells. In people taking antiretroviral therapy, that process of activation causes a very low level of viral replication, below the limits of detection of all but the most sensitive experimental tests, because antiretroviral therapy shuts down this re-seeding process. Yet, only a very small number of latently infected cells are needed in order to establish a detectable level of virus production within days of halting antiretroviral therapy. For this reason, studies of treatment interruption have consistently shown that viral load rebounds to a level corresponding to the pre-treatment peak within a few weeks of stopping treatment.

A classification system used to describe the stages of early HIV infection, based on the timing and results of diagnostic tests. During the eclipse phase, no markers of HIV can be identified. This is followed by Fiebig stage I (HIV RNA can be detected in a viral load test), stage II (p24 antigen can also be detected) and stage III (HIV antibodies detectable for the first time). Stages IV, V and VI correspond with the evolution of results on the Western Blot test. The eclipse phase may last around ten days; Fiebig stage III is reached in most individuals within one month; and it may take around three months to reach stage VI.

It has been proposed previously that very early antiretroviral treatment in infants might offer the best prospect of HIV elimination using antiretroviral therapy alone. This is because antiretroviral therapy started early enough, in an infant infected with HIV during delivery, might have the potential to restrict the establishment of long-lasting reservoirs of latently infected cells. One case report also presented at this conference, of an infant with confirmed infection treated from 31 hours after delivery, and now off treatment for one year with no signs of viral replication, offers proof of concept. Further studies are planned to test whether this 'functional cure' can be replicated in other infants.

Limiting the size of the reservoir by early treatment

Another question for future HIV eradication studies will be: does a smaller reservoir of latently infected cells afford a better prospect of curing HIV infection, and if so, is it possible to limit the size of the reservoir by treating a person very soon after HIV infection?

Researchers in Thailand have been attempting to do this, by offering a process of very fast diagnosis and treatment initiation, in a setting with a high incidence of HIV infection. People who presented to the Thai Red Cross HIV testing centre in Bangkok were tested for HIV RNA, p24 antigen and HIV antibodies, using a third-generation enzyme-linked immunosorbent assay (EIA).

Diagnostics were completed within a median of three days, after which people diagnosed with HIV were asked if they would be willing to undergo leukopheresis for CD4 cell counting and enumeration of total and integrated HIV DNA in peripheral blood mononuclear cells (PBMCs). (Integrated HIV DNA indicates that, in theory, a cell would be capable of producing replication-competent virus in the future.) Participants were also asked if they would be willing to undergo sigmoid colon sampling in order to obtain samples from any potential HIV reservoirs in the gut. A median of two days after diagnosis, subjects started antiretroviral therapy with a regimen that included raltegravir in order to achieve very rapid viral load reduction.

The study recruited 75 participants, 91% of them men who have sex with men. Data were presented on 68 subjects for whom quantification of HIV DNA had taken place. These included 21 subjects in whom sigmoid biopsies had also been carried out. Just over one-third (37%) were in Feibig 1 of acute HIV infection, that is to say, they were HIV RNA positive but negative for p24 antigen and negative for HIV antibody by third-generation ELISA test. The median time between enrolment and exposure was 15 days in this sub-set of patients, said Dr Jintanat Ananworanich.

Patients in Feibig 2 (HIV RNA+, p24+) and Feibig 3 (ELISA+, western blot negative) stages of acute infection showed substantial reductions in HIV DNA within 12 weeks of starting antiretroviral treatment, and reached undetectable levels of integrated HIV DNA in PBMCs by week 24. Seven out of ten patients (3 Feibig 1 and 4 Feibig 2/3 patients) who underwent sigmoid biopsy, and who had detectable integrated HIV DNA at baseline, had undetectable HIV DNA by week 24 of treatment.

Analysis of CD4 central memory cells (the key reservoir for infection) showed very limited infection compared to transitional and effector memory CD4 cells at baseline, and this trend persisted after 24 weeks of treatment.

Patients treated early in acute infection, whether in stages Feibig 1 or 3, showed similar characteristics to 'elite' HIV controllers – a small or undetectable reservoir of HIV DNA, and a bias towards infection of transitional and effector cells rather than central memory cells, concluded Dr Ananworanich. These patients may be ideal candidates for future cure studies which look at the use of therapeutic vaccines in combination with agents that can deplete the HIV reservoir. In due course, treatment interruptions might also be attempted in order to determine whether any of these patients is functionally cured, and if so, what might be the immunologic correlates of a functional cure.

Dr Katherine Luzuriaga also presented data on the characteristics of the HIV reservoir after early treatment, this time in five adolescents with a median age of 16 who had received antiretroviral treatment since soon after birth (median 2 months of age). It was impossible to isolate replication-competent HIV DNA from any of these patients, although proviral DNA was detectable at a low level, and they had no HIV-specific antibody or CD8+ T-cell responses. In comparison, four age-matched young people who had begun HIV treatment in later childhood, and who had sustained undetectable viral load ever since, had detectable HIV RNA (8 copies/ml) by ultrasensitive assay and HIV antibody and CD8+ T-cell responses to a broad range of HIV genes, indicating ongoing replication.

Dr Luzuriaga’s group suggested that these young people, like the acutely infected Thai patients described by Dr Ananworanich, could be “prime candidates for interventions to achieve functional cure or eradication.”

In contrast, data presented by collaborators from the University of Pittsburgh and Harvard University, show that in adults treated with fully suppressive antiretroviral therapy for at least ten years, but commenced in advanced HIV disease (median CD4 cell count 193 cells/mm3), HIV DNA declines during treatment, but remains detectable after ten years, with higher levels correlated with older age and higher baseline viral load. These findings suggest a much more well-established reservoir of HIV infection in chronically infected adults.

Where is the reservoir, and what's in it?

Further grounds for caution regarding the stubborn persistence of the HIV reservoir came in a series of presentations from research groups that had evaluated a variety of cell types, and also questioned the assays used to assess reservoir size, and come up with some dispiriting assessments of the complexity and size of the reservoir.

Maria Buzon and colleagues at the Ragon Institute, Harvard University, identified a pool of long-lasting cells, memory T-cell stem cells, which harbour high levels of HIV DNA despite long-term antiretroviral treatment, and which become more important as a proportion of all infected cells as time goes on. Natalia Soriano-Sorabia of University of North Caroline, Chapel Hill, identified gamma-delta T-cells as an important and hitherto unmeasured reservoir.

Another problematic issue for HIV eradication is to determine what to measure. Assays which seek to measure replication-competent HIV in the laboratory from cells harvested from patients – viral outgrowth – may under-count cells containing HIV DNA that might only be induced to replicate in certain restricted circumstances.

Ya-Chi Ho of Johns Hopkins University, Baltimore, described an analysis of the gene sequences of HIV proviruses that could not be induced to replicate after one round of activation in a viral outgrowth assay. 88% were defective, but 12% had an intact viral genome, suggesting that they might have the potential to infect other cells if they could be triggered to replicate. This finding led Ho and colleagues to estimate that the average latent reservoir could be 48 times larger than currently estimated.

A webcast of the session in which this research was presented, Is there hope for HIV eradication?, is available on the conference website.