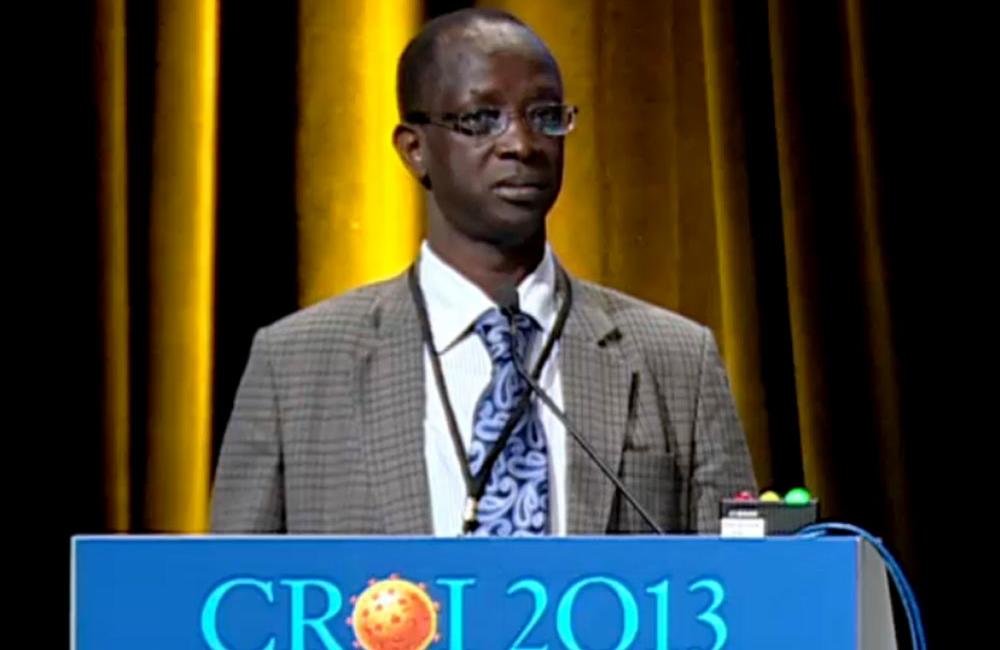 Dr Frederick Sawe of the Kenya Medical Research Institute presenting at CROI 2013.
This article is more than 10 years old. Click here for more recent articles on this topic

Six-monthly viral load testing of patients taking antiretroviral therapy (ART) at primary health clinics in rural Kenya reduced the risk of virologic failure at 18 months of follow-up by 46%, according to the results of the Clinic-based ART Diagnostic Evaluation (CLADE) randomised controlled trial conducted in rural Kenya at seven district-level clinics. Dr Frederick Sawe of the Kenya Medical Research Institute presented the findings to the 20th Conference on Retroviruses and Opportunistic Infections (CROI 2013) in Atlanta last week.

Routine viral load monitoring is still the exception rather than the rule in resource-limited settings owing to a number of barriers to implementation. The lack of point-of-care viral load testing, coupled with the need to send blood samples to laboratories that can carry out the test, make it difficult to carry out viral load testing for every patient.

WHO guidelines recommend the use of HIV-1 RNA viral load to confirm ART treatment failure, and routine viral load tests every six months where available. Kenya Ministry of Health (MoH) guidelines recommend targeted viral load if treatment failure is suspected. However, the WHO guidance is based on “low quality evidence”. Randomised controlled trial data, including cost effectiveness in rural settings where the majority of the HIV burden exists, are lacking.

The study took place in seven rural district clinics, five of which are managed by the Kenyan Ministry of Health and two of which managed by faith-based organisations. The clinics are primarily staffed by clinical officers and nurses. The baseline characteristics were similar between the two groups, with 57% of participants being female, 37 years being the median age and the median CD4 count being between 164 and 168 cells/mm3 in both groups. Just under one-third had advanced HIV disease (WHO stages 3 or 4 HIV disease).

Viral load testing was carried out at a central laboratory in Kericho.

The study also found that 15.4 people needed to be screened in order to prevent one viral failure.

Several strategies to improve access to viral load testing are being pursued simultaneously. As well as the development of point-of-care testing devices, which are still some way off, research groups have been investigating interim measures that could make it easier to ship blood samples and bring down the cost of laboratory-based testing. A number of research groups presented data at the conference on innovative methods of sample collection and testing for the monitoring of viral failure.

Three groups presented data on the use of dried blood spots as a medium of collection for blood samples. Dried blood spots have a number of potential limitations, including concerns about stability at high temperatures and over time, and questions about the correlation between HIV RNA levels in plasma and whole blood, which might lead to poorer sensitivity of dried-blood-spot testing.

MSF researchers in Mozambique evaluated a point of care nucleic acid testing (NAT) platform used for infant HIV DNA testing as a means to identify virologic failure in adults receiving antiretroviral therapy (Alere point-of-care NAT), again using fingerprick blood sampling in comparison to venous samples. The NAT device had a sensitivity of 95% for detecting virologic rebound above 5000 copies/ml, and a sensitivity of 98.5% for early infant diagnosis (Jani). Pooled nucleic acid testing, as used in testing of blood donations, was evaluated in South Korea. 215 samples were tested in pools of five and the method was found to be 100% accurate in detecting virologic failure, while saving $15,912 in viral load testing costs during 10 months (Kim).

Pooled viral load testing was also evaluated by MSF in Malawi, once again in pools of five, and found to have a negative predictive value of 98.9% at a viral load cut-off of 1000 copies/ml. Three hundred and fifty samples were tested; researchers estimated that pooled testing would save between $2402 and $4318 on this batch of tests alone (Pannus).