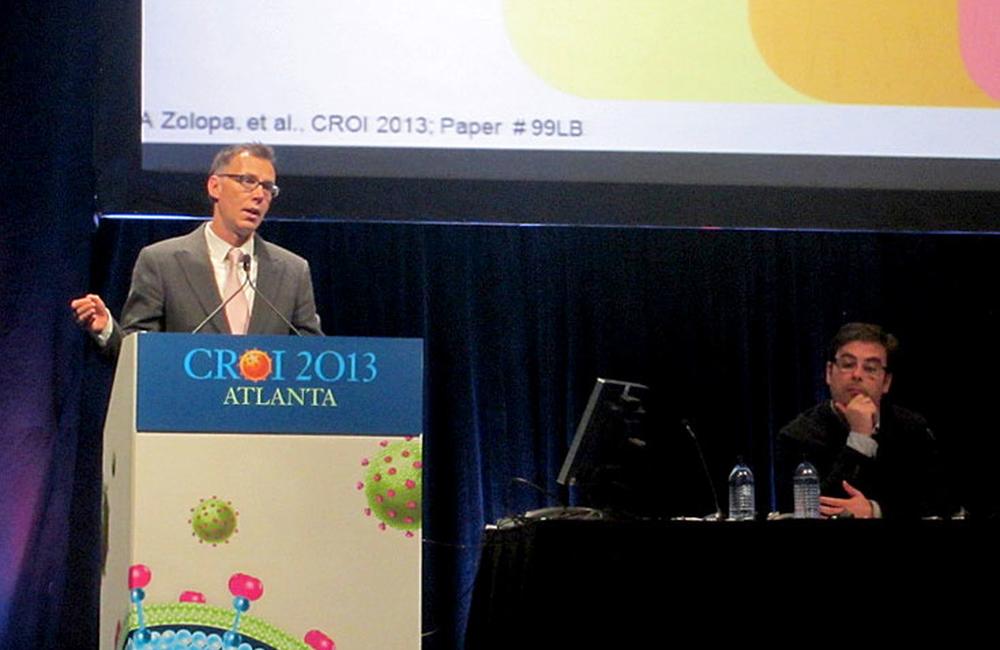 Gilead Sciences' tenofovir is highly effective and a recommended component of first-line HIV treatment, but it can cause impaired kidney function and bone loss in some people. Moreover, it is not very bioavailable. TDF (Viread, also in the Truvada, Atripla, Eviplera/Complera and Stribild co-formulations) is a pro-drug that delivers tenofovir diphosphate, the active form, efficiently to blood plasma.

TAF has a different structure to TDF and is metabolised by a protein known as cadapsin A, reaching higher concentrations in lymphoid cells such as CD4 cells. With the new formulation, adequate tenofovir concentrations in cells can be achieved using a much lower dose, which has less potential to harm kidney and bone tissue.

Andrew Zolopa from Stanford University and colleagues conducted a phase II study to compare the safety and efficacy of TAF vs TDF in 170 previously untreated people with HIV. At study entry they had normal kidney function and no known resistance to tenofovir or emtricitabine (FTC, Emtriva).

Almost all participants in Study 102 were men, two-thirds were white, most of the rest were black, and about 20% were of Hispanic/Latino ethnicity. The mean age was approximately 35 years. The median CD4 cell count was just under 400 cells/mm3 and about 20% had high baseline viral load (HIV RNA >100,000 copies/ml). None had hepatitis B or C co-infection.

The 58 participants randomly assigned to the TDF arm used the Stribild single-tablet regimen, which also contains the integrase inhibitor elvitegravir, the boosting agent cobicistat and emtricitabine. The 112 people in other arm used a similar once-daily 'Quad' coformulation with TAF replacing TDF. Stribild contains 300mg TDF whilst the comparator formulation contains just 10mg TAF; doses of the other three components are the same.

Zolopa reported primary endpoint data on the proportions of participants with undetectable HIV viral load (< 50 copies/ml) at week 24 of treatment. Follow-up will continue through to week 48.

Results showed that people using the TAF coformulation had about five-fold higher concentrations of tenofovir diphosphate in peripheral blood mononuclear cells (PBMCs) but about 90% lower plasma levels compared with those taking TDF.

In an intent-to-treat analysis at 24 weeks, 87% of participants taking the TAF coformulation pill achieved HIV RNA <50 copies/ml compared with 90% of those taking Stribild, not a statistically significant difference.

Virological failure at week 24 was observed in 13% of TAF recipients and 10% of TDF recipients, again not a significant difference. Among three participants eligible for resistance testing, one was found to have NRTI resistance mutation.

Treatment was generally safe and well tolerated with similar overall drug safety profiles. Most side-effects were mild-to-moderate. No treatment-related serious adverse events were reported in either treatment arm. Although four TAF recipients discontinued treatment prematurely due to adverse events compared with none in the TDF arm, only one such event (photosensitivity) was considered related to study drugs.

The most common adverse events reported by at least 10% of participants included nausea (18% with the TAF coformulation vs 12% with Stribild), diarrhoea (12% in both arms), fatigue (12 vs 9%), headache (10% in both arms) and upper respiratory tract infections (7 vs 12%).

There were no significant differences in the frequency or type of grade 3 and 4 laboratory abnormalities. Levels of total, LDL ('bad') and HDL ('good') cholesterol rose across the board, but significantly more so in the TAF arm. Levels of triglycerides and glucose were about the same in both arms.

Turning to kidney-related side-effects, participants in both the TAF and TDF arms saw increases in serum creatinine (0.07 vs 0.12 mg/dl, respectively) and declines in estimated glomerular filtration rate (eGFR) (-4.9 vs -11.8 ml/min, respectively), but both were significantly smaller with TAF. These changes were mostly evident by week 2 but stabilised by week 24. Although creatinine changes can be markers of impaired kidney function, Zolopa described them as a known effects of cobicistat blocking tubular secretion of creatinine. Plasma albumin and retina binding protein levels were both lower in the TAF arm. TAF recipients were about two-thirds as likely to have protein in their urine (14 vs 21%, respectively). There were no cases of proximal renal tubulopathy and no discontinuations due to kidney problems in either treatment arm.

DEXA measurements performed at baseline and week 24 showed significantly smaller decreases in bone mineral density in the TAF arm compared with the TDF arm at both the spine (mean -0.8 vs -2.5%) and the hip (mean -0.3 vs -2.0%). Furthermore, considerably more people taking TAF showed no decrease in bone density at the spine (8 vs 12%) or hip (41 vs 23%).

In this first phase II study comparing two tenofovir pro-drugs, the TAF-containing coformulation "demonstrated comparable efficacy and a statistically significant improvement in the renal and bone safety profile at 24 weeks" relative to the TDF-containing regimen, the researchers concluded.

These results support further evaluation of the TAF coformulation in phase III clinical trials, they added. Gilead announced in January that one such trial (Study 104) is now underway and another (Study 111) is expected to start soon.

"I'm not so worried about virus [developing resistance], we have to worry more about long-term consequences to our patients" of remaining on treatment, Zolopa emphasized at a CROI press conference discussing new antiretroviral agents and approaches to therapy.

Compared with TDF, the new TAF is "safer and equally effective", he continued. "All markers studied look either equal or favorable for TAF" and the kidneys "see about 90% less tenofovir [with TAF] vs the current formulation".