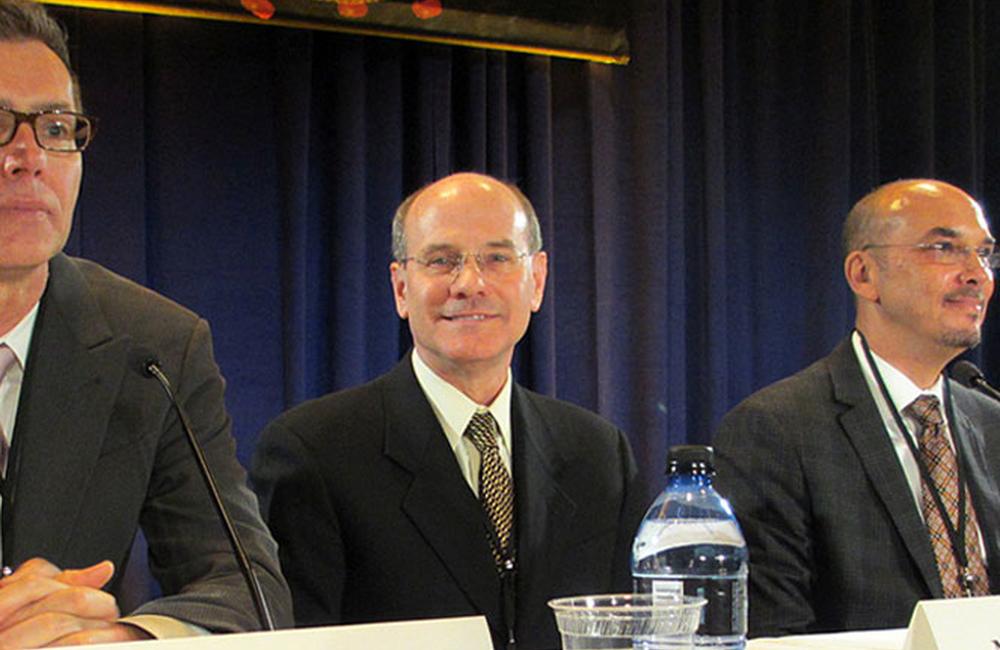 Matt Anderson at CROI 2013. © Liz Highleyman / hivandhepatitis.com
This article is more than 10 years old. Click here for more recent articles on this topic

NNRTIs are generally well tolerated and are well-suited for first-line HIV treatment, but as a class these drugs are susceptible to resistance. Pre-clinical studies showed that MK-1439 has enhanced activity against HIV strains with certain other common NNRTI resistance mutations (including K103N and Y181C). Unlike the widely used NNRTI efavirenz (Sustiva or Stocrin), it appears to have low potential for central nervous system (CNS) toxicity.

Matt Anderson from Merck and colleagues evaluated MK-1439 in a double-blind, placebo-controlled trial at a single site in Berlin. The researchers looked at drug safety, tolerability, antiviral activity, pharmacokinetics and emergence of viral resistance.

This analysis included 18 previously untreated people with HIV. Although both men and women were eligible, only men sought to enrol in the trial. Ages ranged from 23 to 45 years. At study entry they had at CD4 cell counts of at least 200 cells/mm3 and normal biochemistry and blood lab results. People with hepatitis B or C co-infection were excluded.

Participants were evenly randomised to receive 25mg or 200mg once-daily MK-1439 or placebo as monotherapy for seven days. After completion of dosing, participants were started on standard combination antiretroviral therapy for ten more days so that residual MK-1439 would not promote development of resistance in the absence of other antiretrovirals.

MK-1439 showed potent antiviral activity. Viral load levels fell steadily for people taking either dose of MK-1439, whilst remaining stable for placebo recipients. At day seven of treatment, HIV RNA declines were similar in the 25mg and 200mg dose arms, at 1.37log10 and 1.26 log10, respectively. No participants showed evidence of viral breakthrough after one week of monotherapy.

MK-1439 pharmacokinetic parameters were similar to those previously seen in HIV-negative volunteers taking the same doses. Drug levels reached a steady state after three to five days, exposures exceeded the level needed for viral inhibition, and the average effective half-life in the body was 10 to 16 hours.

MK-1439 continued to appear safe and well tolerated. Although about three-quarters of participants experienced adverse events, these were mostly mild-to-moderate in intensity and resolved after the end of treatment. No significant skin rash, CNS events or laboratory abnormalities were reported.

Only three events were considered potentially related to the drug (night sweats, headache, and loss of appetite). The single serious adverse event – increased liver enzymes in a person with acute hepatitis C – was judged to be probably unrelated to the study drug.

Anderson said that a phase IIb clinical trial is currently enrolling to compare MK-1439 and efavirenz, both with tenofovir/emtricitabine (the drugs in Truvada). More details are available at www.clinicaltrials.gov/ct2/show/NCT01632345.