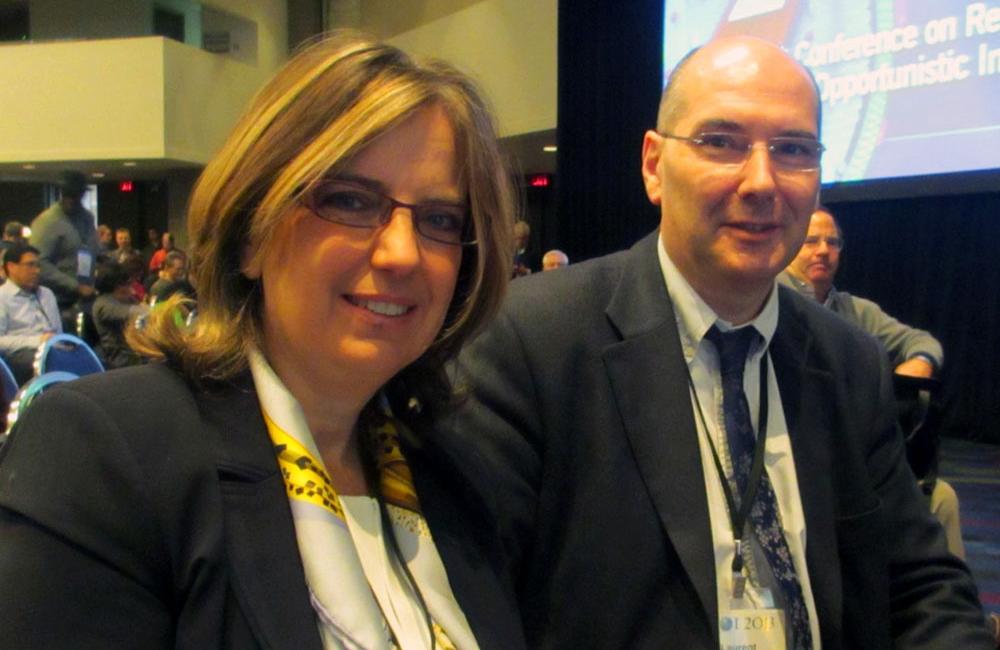 Isabelle Poizot-Martin and Laurent Cotte at CROI 2013. © Liz Highleyman / hivandhepatitis.com
This article is more than 10 years old. Click here for more recent articles on this topic

Adding boceprevir or telaprevir to interferon-based therapy showed promising indications of efficacy and acceptable safety for difficult-to-treat HIV/HCV co-infected prior non-responders in a pair of French studies presented yesterday at the 20th Conference on Retroviruses and Opportunistic Infections (CROI 2013) in Atlanta.

The advent of direct-acting antiviral agents for hepatitis C (HCV) has ushered in a new treatment paradigm. While many patients and providers await interferon-free regimens, some people with chronic hepatitis C have progressive liver disease and require treatment now. But some people who need effective treatment the most have factors associated with poorer response and reduced tolerance of side-effects, including HIV/HCV co-infection, advanced liver fibrosis or cirrhosis, obesity, certain genetic factors and a history of prior treatment failure.

ANRS, the French National Agency for AIDS Research, designed the phase II BocepreVIH and TelapreVIH trials to test the safety and efficacy of triple therapy using the HCV protease inhibitors boceprevir (Victrelis) or telaprevir (Incivo or Incivek) with pegylated interferon plus ribavirin for co-infected people who did not respond to prior interferon-based treatment. Although the study designs, interventions and patient populations are similar, they were not designed to compare one drug versus the other.

Most (75%) were men and the median age was 49 years. About three-quarters had difficult-to-treat HCV sub-type 1a and high HCV viral load at baseline (> 800,000 IU/mL); 17% had liver cirrhosis (stage F4). Approximately one-third were prior null responders (little or no HCV suppression during previous treatment), one-third were post-treatment relapsers, just under one-third were partial responders and a few experienced prior viral breakthrough during treatment.

Participants had well-controlled HIV with a median CD4 T-cell count of 728 cells/mm3 and 95% having undetectable HIV viral load. Individuals who were both prior null responders and had cirrhosis were excluded, as were those with hepatitis B triple infection.

Participants in this single-arm, open-label trial received a 4-week lead-in of 1.5 mcg/kg/week pegylated interferon alfa-2b (PegIntron) plus 800-1400mg/day weight-adjusted ribavirin. They then added 800mg thrice-daily boceprevir and remained on triple therapy for 44 weeks. Those who still had detectable HCV RNA at specified time points during treatment continued on pegylated interferon/ribavirin alone for an additional 24 weeks.

Based on information – or lack thereof – about drug-drug interactions with antiretroviral agents, participants had to be taking tenofovir (Viread) or abacavir (Ziagen) plus either emtricitabine (Emtriva) or lamivudine (Epivir), along with either ritonavir-boosted atazanavir (Reyataz) or raltegravir (Isentress).

After 4 weeks on treatment, 44% of participants had rapid virological response (HCV RNA < 15 IU/mL). At week 16 of treatment, 63% overall had undetectable HCV viral load. This rose to 90% for relapsers, but fell to 38% for prior null responders. No one experienced viral breakthrough while on treatment.

Almost all participants experienced some adverse events, including gastrointestinal symptoms, skin rash or itching (including sun sensitivity), dysgeusia (odd taste sensations) and neuropsychiatric problems such as depression or anxiety. About 30% experienced serious adverse events and four people stopped treatment prematurely for this reason.

Blood cell deficiencies were common, with 42% experiencing anaemia and 70% developing neutropenia (low white blood cells, which can lead to infections). Anaemia was managed proactively with erythropoietin (EPO), with the addition of ribavirin dose reduction or blood transfusions if needed. Only one discontinuation was due to anaemia.

The researchers concluded that safety data through week 16 were "consistent with those observed in naive HCV genotype 1/HIV co-infected patients," adding that proactive management of anaemia reduced its severity.

During the discussion period, session co-chair Jürgen Rockstroh brought up drug-drug interactions between boceprevir and atazanavir, noting discrepancies in current recommendations. In early 2012, boceprevir manufacturer Merck issued a letter to healthcare providers stating that the company does not recommend co-administration of boceprevir with ritonavir-boosted HIV protease inhibitors. The US Food and Drug Administration says these drugs should not be used together, but the European Medicines Agency allows for more flexibility.

Laurent Cotte reported parallel findings on behalf of the ANRS-HC26 TelapreVIH Study Group. This single-arm study included 69 genotype 1 HIV/HCV co-infected people who did not respond to prior interferon-based treatment.

"A high SVR rate is expected with [telaprevir/pegylated interferon/ribavirin] in this difficult-to-treat population,"

The patient population was similar to that of BocepreVIH. Most (80%) were men and white, the median age was 50 years and 70% had HCV subtype 1a; 16% had advanced fibrosis and 23% had cirrhosis. About 40% were previous relapsers, 30% were prior null responders, 22% were partial responders and again a few previously experienced viral breakthrough. The median CD4 count was 630 and 99% had undetectable HIV RNA.

Participants could take the same antiretroviral agents as in BocepreVIH, with the additional option of efavirenz (Stocrin or Sustiva). The exclusions of prior null responders with cirrhosis and people with hepatitis B were also the same.

Patients received a 4-week lead-in of 150mcg/week pegylated interferon alfa-2a (Pegasys) plus 1000-1200mg/day weight-adjusted ribavirin. They then added thrice-daily telaprevir (typically 750mg, but 1125mg if using efavirenz) and remained on triple therapy for 12 weeks. Finally they continued on pegylated interferon/ribavirin alone for 32 or 56 additional weeks depending on response at earlier time points.

Again the primary endpoint is SVR24 weeks and interim EVR16 data were reported at CROI.

Only 1.5% of participants had rapid virological response at week 4, far lower than the rate for boceprevir-treated people in the other study. But by week 8 the overall response rate was higher with telaprevir, and by week 16 it reached 88%. Again, there were no viral breakthroughs while on treatment.

EVR16 rates were similar regardless of antiretroviral regimen (88% for boosted atazanavir, 92% for raltegravir or efavirenz). Here, too, people with advanced fibrosis had the lowest response rate (82%) whilst those with cirrhosis had the highest (94%), but the differences were not significant.

Type of prior non-response had a smaller effect than that seen in the boceprevir study. EVR16 rates were 85% for relapsers, 100% for prior partial responders and 86% for null responders.

Again, almost all participants experienced some adverse events. The range of side-effects was generally similar to those in BocepreVIH, but skin reactions were more common, reaching 70%. Eight people discontinued due to adverse events. The proportion with anaemia was a bit lower (30%) but the rate of neutropenia was higher (84%). Anaemia was managed with EPO, transfusions and ribavirin dose reduction.

Both studies are still at an early stage, and continued follow-up is needed to determine whether HCV will remain suppressed at the end of therapy and after treatment is finished, indicating a cure.

But for those who need treatment now, triple therapy with boceprevir or telaprevir can shorten treatment and improve response rates relative to pegylated interferon/ribavirin alone, including for co-infected prior non-responders. When a cure is achieved, not only does the risk of liver disease complications fall dramatically, but HIV-related complications are reduced as well, he emphasised.