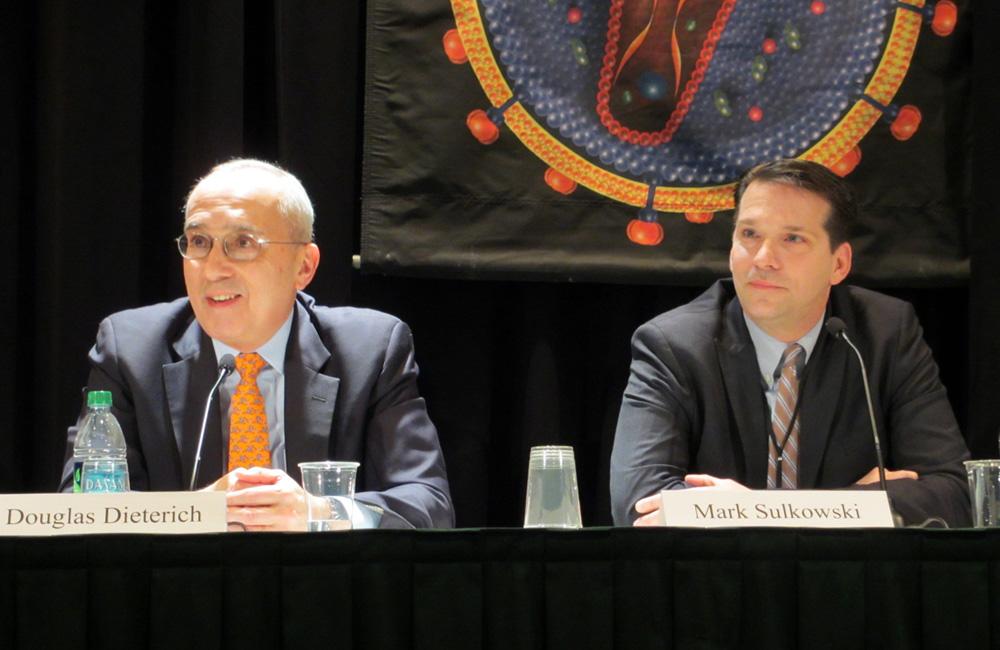 Last year's approval of the first direct-acting hepatitis C drugs has ushered in a new era of treatment. The HCV protease inhibitors telaprevir (Incivo, Incivek) and boceprevir (Victrelis) are licensed in the US and Europe for HCV monoinfected patients in combination with pegylated interferon and ribavirin. Studies are ongoing for the coinfected population, a group that urgently needs better treatment options.

The study consisted of two parts. Part A included 13 coinfected participants who had CD4 T-cell counts of at least 500 cells/mm3 and were not yet taking antiretroviral therapy (ART). Part B included 47 people on ART; 24 took efavirenz (Sustiva or Stocrin) plus tenofovir (Viread) and emtricitabine (Emtriva), while 23 took ritonavir-boosted atazanavir (Reyataz) with either lamivudine (Epivir) or emtricitabine.

Most participants were men, with an average age of about 45 years. Part A included a higher proportion of people of African descent (a group that does not respond as well to interferon-based therapy). About half in Part A and 75% in Part B had HCV genotype 1a, the rest 1b. Most had high baseline HCV viral load about 10% had advanced liver fibrosis or cirrhosis. Median CD4 counts in Part A and B were approximately 600 and 500 cells/mm3, respectively; patients on ART had suppressed HIV RNA below 50 copies/ml.

In both parts of the study, participants were randomly assigned to receive either telaprevir or placebo in combination with 180 mcg/week pegylated interferon alfa-2a (Pegasys) plus ribavirin. Triple therapy continued for 12 weeks, followed by pegylated interferon/ribavirin alone through week 48.

Dieterich reported rates of sustained virological response, or continued undetectable viral load, at 12 weeks after completion of treatment, known as SVR12. This has been shown to be a good predictor of 24-week SVR, generally considered a cure.

Overall, 74% of patients taking telaprevir achieved SVR12, compared with just 45% of those taking pegylated interferon/ribavirin alone. Among participants off ART in Part A, SVR12 rates were 71% and 33%, respectively. By ART regimen, 69% using the efavirenz combination and 80% using boosted atazanavir achieved SVR12 with telaprevir, compared with 50% for both regimens with pegylated interferon/ribavirin alone.

People taking telaprevir experienced more side-effects overall than those on pegylated interferon/ribavirin alone. Three people on telaprevir, but none in the control group, discontinued treatment early due to adverse events. Adverse events that occurred at least 10% more often among telaprevir recipients compared with placebo recipients included pruritis or itching (39% vs 9%), headache (37% vs 27%), nausea (34% vs 23%), skin rash (34% vs 23%), fever (21% vs 9%) and depression (21% vs 9%); insomnia and weight loss were more common in the control group. No patients in either arm experienced severe rash and anaemia was equally common in both groups (18%).

All participants started with a four-week lead-in period of pegylated interferon/ribavirin alone, followed by triple therapy for 44 more weeks. Here too, people with poor early response discontinued treatment according to predefined futility rules.

All patients in this trial were taking ART and had stable undetectable HIV viral load. Based on prior drug-drug interaction studies, they were limited to regimens containing a boosted HIV protease inhibitor plus two nucleoside/nucleotide reverse transcriptase inhibitors. Further analysis recently revealed that combining boceprevir with boosted HIV protease inhibitors can lower drug levels and potentially allow HIV or HCV rebound.

Again, most participants (about 70%) were men and the median age was 44 years; 65% had HCV genotype 1a, the rest 1b. Most had high baseline HCV RNA and about 5% had cirrhosis. The median CD4 count was about 580 cells/mm3.

Three months after completion of treatment, 61% of participants in the boceprevir arm achieved SVR12, compared with only 27% in the placebo arm – a difference of 34%. There were two relapses in the triple therapy group and one in the control group.

This similarity raises a question about the clinical significance of the recently announced drug-drug interaction findings. However, in a press release describing the SVR12 findings, Merck said it "does not recommend the co-administration of [boceprevir] and ritonavir-boosted HIV protease inhibitors."

At a press conference to discuss the findings Sulkowski said the latest data, taken together, are "really very encouraging," suggesting that triple therapy with an HCV protease inhibitor may be an important option for coinfected patients.

A webcast of the session, Breakthroughs in hepatitis, is available through the official conference website.