Cancers in people with HIV: who gets them, and which ones? 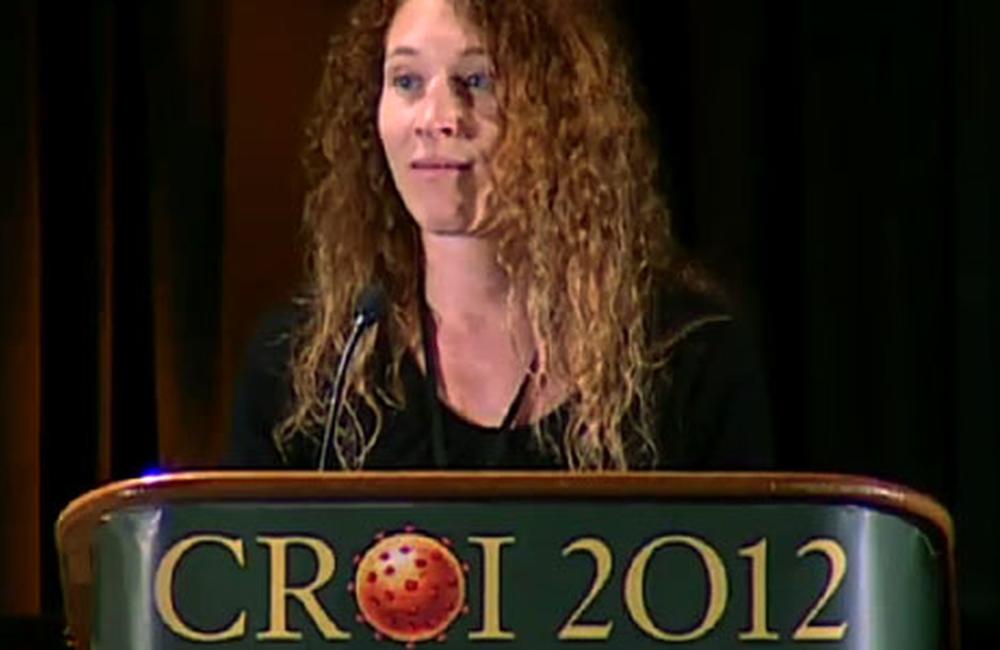 Alison Abraham presenting at CROI. (http://retroconference.org)
This article is more than 10 years old. Click here for more recent articles on this topic

A very low CD4 count in the past, and a history of smoking, are the most consistent risk factors to emerge from large studies of risks for developing both AIDS-defining and non-AIDS-defining cancers, researchers reported at the 19th Conference on Retroviruses and Opportunistic Infections in Seattle this week.

In particular, studies found that cancers were concentrated in older people, those who had experienced very low CD4 cell counts before starting highly active antiretroviral therapy, and those who had very high viral loads before starting treatment – but risk factors differed according to the type of cancer, indicating the complex interactions between HIV disease, ageing and the era in which individuals diagnosed with cancer first began HIV therapy.

Fears that people with HIV might suffer a disproportionate burden of cancers as they age have been expressed as a result of epidemiological evidence from a number of large cohort studies indicating a higher rate of some types of cancers, particularly those with an infectious cause, in people living with HIV.

A number of analyses of large patient populations were presented last week at the 19th Conference on Retroviruses and Opportunistic Infections in Seattle, providing reassurance regarding some aspects of cancer risk in people living with HIV, but also underlining the importance of vigilance for potential cancers in people with a past history of severe immunosuppression.

A review of the North American AIDS Cohort Collaboration, which collates data on over 110,000 people receiving HIV care in the United States and Canada, looked at the incidence of oral and pharyngeal cancers in 51,151 HIV-positive individuals.

These cancers are relatively uncommon in the general population, despite the level of media attention given to HPV-related oral cancers in recent years, and are also uncommon in people living with HIV. The researchers found just 41 new cases of such cancers in their cohorts, and combined with cases already present at the time of HIV diagnosis (prevalent cases), this represented a rate of 21.7 cases per 100,000 person-years. This means that for every 100,000 people with HIV receiving care for a full year, 21 people might be expected to develop one of these cancers.

Only 28% of the incident cases were taking antiretroviral therapy when they were diagnosed with one of these cancers, at a median CD4 cell count of 324 cells/mm3. All cases occurred in people who had a history of smoking.

The researchers also examined whether the risk of oral and pharyngeal cancers has increased over time. They found that the age-standardised incidence had increased significantly from 10.6 cases per 100,000 patient-years  in the period 1996-2000 to 30.1 cases per 100,000 patient-years in the period 2006-10 (p = 0.03) whereas in the general population the incidence of these cancers has shown a decreasing trend over the same period.

However this big difference appears to have been driven chiefly by cancers in people over 50 with CD4 counts below 350; cancer rates in other groups remained stable over time.

Although all cancers were diagnosed in people with a history of smoking, presenter Alison Abrahams of Johns Hopkins University Bloomberg School of Public Health noted that the lack of information on smoking intensity and alcohol consumption was a limitation of this analysis.

Although rates of the AIDS-defining cancer non-Hodgkin lymphoma (NHL) have declined since the introduction of HAART in 1996, rates reported in cohort studies continue to be between four and 23 times higher than in the general population. This variation has been variously attributed to calendar time, immunosuppression, age and viral load, as well as location and demographics.

Chris Achenbach presented data on NHL incidence in the CFAR network of Integrated Clinical Systems representing eight large HIV clinics in the United States serving diverse populations and comprising just over 10,000 patients in care. The cohort was largely diagnosed in the modern era of HAART, with a median year of viral load suppression of 2004. They had a median nadir CD4 count of 180 cells/mm3 and peak viral load of 4.6 log10 copies/ml. Eighty-five per cent achieved viral load suppression below 50 copies/ml but 54% also experienced at least one viral load rebound above 500 copies/ml.

Fifty-four per cent of cases occurred in the first two years after viral suppression. The highest rate of lymphoma was observed in those with a nadir CD4 count below 50 cells/mm3 (20 events per 10,000 person-years compared to 15 events in those with a nadir CD4 cell count above 200), and Kaplan-Meier analysis showed a higher incidence of NHL cases in this stratum during the first five years after viral suppression.

Overall the study found that the rate of NHL in this HIV-positive cohort was at least seven times higher than in the US general population, at 15 cases per 10,000 patient-years of follow-up, compared to rates of between 1.7 and 2 cases per 10,000 patient-years in HIV-negative cohorts. Although male gender and white race were the strongest predictors of NHL, as in the general population, the level of immune suppression was also predictive after controlling for age, sex and race (each 100 cell increment in current CD4 cell count reduced the risk of NHL by 40%). There was also a modestly increased risk in those with detectable viral load after having previously achieved viral suppression, and a more pronounced increase in risk among those with a viral load between 50 and 500 copies/ml in the population diagnosed with NHL with a viral load below 500 copies/ml.

The authors of this study concluded that although earlier detection of lymphoma, together with earlier HIV diagnosis and treatment, may reduce the incidence of NHL, an elevated risk of lymphoma is likely to persist in people living with HIV due to immune dysregulation that cannot be normalised by current antiretroviral therapies, and due to the state of B-cell activation that persists in people with HIV infection. Understanding how these factors contribute to the development of NHL in people with HIV, and how these states can be corrected, is likely to make an important contribution to reducing the burden of cancers in people with HIV.

The median age of diagnosis of a malignancy was 50 years, and diagnosis occurred at a median CD4 count of 392 cells/mm3 (interquartile range 245-580). The median nadir CD4 count of diagnosed persons was 127 cells/mm3 (interquartile range 49-245), and the median viral load was 50 copies/ml (undetectable). Hepatitis C co-infection was present in 8.5% and hepatitis B in 6.3%. Just over one-third of those diagnosed was a current smoker (34.4%).

Signe Worm, presenting the results on behalf of the D:A:D collaboration, noted that a low nadir CD4 count remained associated with a persistent increase in risk, but that for the subgroup of patients with CD4 cell increases from nadir to above 200 cells/mm3, a low CD4 count nadir ceases to become relevant to current risk of developing a non-AIDS malignancy over time.

Achenbach C et al. Incidence and Predictors of NHL among HIV+ Patients on Suppressive ART. 19th Conference on Retroviruses and Opportunistic Infections, Seattle, abstract 131, 2012. The abstract is available on the official conference website.

Worm S NADM and Immunosuppression: The D:A:D Study. 19th Conference on Retroviruses and Opportunistic Infections, Seattle, abstract 130, 2012. The abstract is available on the official conference website.

A webcast of the session, Cancer and HIV: treatment, pathogenesis and risk factors, is available through the official conference website.