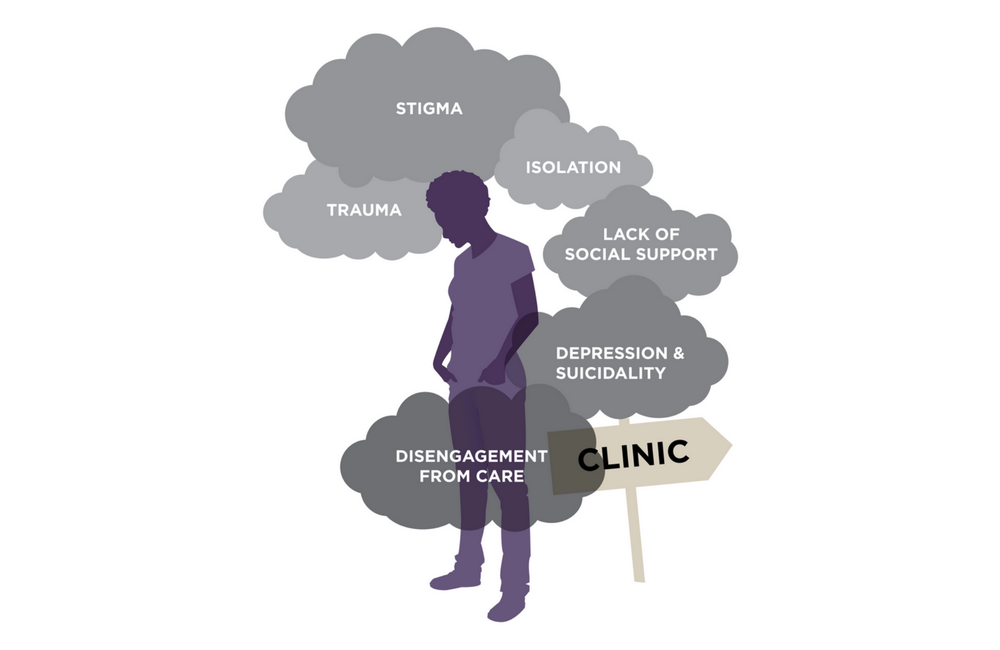 A conceptual model from the journal article representing the cascade of factors from experiences of trauma to disengagement from care among adolescents living with HIV. Creative Commons licence.

Trauma is a major underlying reason for adolescents disengaging from HIV care in Kenya, report Dr Leslie Enane of Indiana University and colleagues in the Journal of the International AIDS Society. The study shows that adolescents have experienced a wide range of traumas and are particularly affected by stigma, poor mental health, disclosure and transitions in care.

Globally, 1.7 million adolescents (aged 10 to 19) live with HIV. The majority are in sub-Saharan Africa, including approximately 110,000 living in Kenya. While death rates among adults and children have declined, they have remained constant among adolescents. AIDS-related illnesses are the leading cause of death among adolescents in Africa and the second leading cause globally.

Adolescents have higher rates of disengagement from care than any other age group. There is limited research that explores how trauma impacts adolescents’ engagement in HIV care. Moreover, few studies have explored trauma interventions in sub-Saharan Africa.

Researchers recruited adolescents who had previously disengaged from care at the Moi Teaching and Referral Hospital or Kitale District Hospital (west Kenya). They focused on those who had missed their clinical appointments by 60 or more days.

A total of 42 adolescents were included in the study. Of them, 62% were female. They were 13 to 21 year olds (average age 17 years old). The majority (67%) had experienced the death of at least one parent and food insecurity was reported by 60%.

Thirty-four caregivers participated in the study. This included parents, grandmothers, siblings, uncles and aunts. Twenty-eight healthcare workers across ten clinics were also recruited. This included outreach workers, nurses, social workers and a psychologist, who had on average been working in HIV care for ten years. All interviews were conducted by researchers fluent in Swahili and English.

The researchers defined a traumatic event in broad terms, as potentially life-threatening or highly stressful experiences which undermine a sense of safety. This included violence or injury, death of loved ones, severe illness and discrimination.

Disengaged adolescents shared a heavy burden of trauma which impacted their engagement in HIV care. Sexual trauma was a recurring experience among those who had disengaged. Where an HIV diagnosis was as a result of a sexual assault, engaging in HIV care was associated with that trauma:

“We had a young man who [was sexually abused by] a Catholic priest… He used to feel bad especially when he gets here to [clinic]. It's like the whole thing comes back… When it came to the time to start ARVs,… it was like now the reality is hitting him once again” - Nurse

“This boy… locked me in a room because I told him I was positive. … He called his friends,… he said, ‘didn’t you want to infect us, now infect us.’ You know they raped me, and they were three. So, that’s why I usually really get scared when I date someone and tell him that I am positive.” - Female, 20 to 24 years old

Ongoing intimate partner violence was also reported as a barrier to consistently engaging in care:

“We [tested] and he found out he has the disease, and I also have. So, he called my mum and told her he will kill himself or kill me. … If he gets [my ART] he throws them away… I can’t tell him I’m going [to clinic for] myself, I say I am taking the child. [If I tell him I am going to clinic] he always gets offended and angry… Maybe it’s transport he will refuse to give me. I always say I am bringing the child and he facilitates.” - Female, 15 to 19 years old

Most adolescents reported experiences of internalised and enacted stigma, which directly contributed to disengagement:

“In school, some pupils tell her, ‘Go away, your parent died of that disease and you have it, too’… At times she thinks about it badly. She loses interest for coming to the clinic.” - Caregiver of 15 to 19 years old

“That stigma made me feel so bad, especially the fact that it came from my best friend. I even left school. I tried to commit suicide twice, but it did not work.” - Female, 20 to 24 years old

A lack of support impacted some adolescents’ ability to cope with their trauma and navigate HIV care. Adolescents who experienced orphanhood, family conflicts and poverty faced significant barriers to care:

“[Some caregivers of orphans] – they are not caring enough, they give up making efforts to [support care]… Most of them are like, ‘You take your drug whether you like it or not, it is your life. You will die like the way your parents died.’… Some even have the audacity to tell them when we are with [the] patient here.” -  Clinical officer

Multiple traumas and experiences of stigma were compounded by isolation caused by internalised stigma, abuse or neglect. This resulted in hopelessness, depression and suicidality. Authors note that “hopelessness was central to decreased adherence and disengagement”.

“They feel the inferiority complex as in with having HIV you cannot be empowered, your fate is sealed, as in it is just death that is waiting for you… Sometimes it becomes serious, as in, ‘Why should I come for care?’” - Clinical officer

Healthcare workers described intense case management which involved different types of interventions: relocating adolescents, linking them to peer support, providing counselling and intervening in family conflicts. They provided holistic support, adolescent-friendly services, access to mental health services and flexible clinic appointments. The healthcare workers observed that while some adolescents had good outcomes after these interventions, many did not.

Healthcare workers recognised the need for a trauma-informed approach with all adolescents, even towards those who are adherent:

“Most of the time the staff did not know how talk to a child, we didn't even think it was an important question to ask if he or she is facing difficulties and things like that just pass by unnoticed at the clinic because all you see is a happy child, taking their medication. [A research study] helped us realise that poor adherence can come as a result of trauma the child faced, maybe violence and stress at their home and things like that, so it really helped us probe the children on what they have been going through.” - Nurse

Given the authors focus on trauma, they recognise that the study cannot capture all reasons for disengaging from care.

The authors conclude that trauma and stigma (compounded by isolation and lack of support) contribute to worsened mental health, poor adherence and disengagement. They describe a cascade of factors which may represent key points of intervention to “prevent or respond to trauma; to support social, emotional and mental health; and to bolster care engagement and adherence for adolescents who have experienced a range of trauma”.

Healthcare workers need to consider and address internalised and enacted stigma, as well as reinforce social and familial support for vulnerable adolescents. Person-centred and trauma-informed approaches are needed to understand disengagement. It is important to recognise that traumas may be repeated and compounded by stigma (which is itself traumatic). Mental health support, preventing and addressing these traumas are key to improving retention in HIV care.

“There is a crucial unmet need for mental health and social support among adolescents facing trauma and mental health challenges which greatly impact their ongoing care for HIV,” they say.

Enane LA et al. “I just keep quiet about it and act as if everything is alright” – The cascade from trauma to disengagement among adolescents living with HIV in western Kenya. Journal of the International AIDS Society, 24: e25695, 10 April 2021 (open access).

Russian teenagers who are HIV-positive face discrimination and serious psychological stress. Quite a few, however, are ditching the medicine they desperately need to keep their infections in check.
Deutsche Welle
23 Jan 23
Support issues for children & young people

On December 12, Ntimbwe Munongo Mpamba will celebrate his fortieth birthday with chocolate cake in Johannesburg. He was born with HIV but only became aware of his HIV status many years later. Biénne Huisman spoke to him about living with HIV, his early years when his mother fed him medicine disguised as sweets, and now, living openly as an HIV awareness champion.
Spotlight
29 Nov 22
Young people

The study found that parents in the intervention group talked to their sons more about condoms and HIV and engaged in other parenting behaviors aimed at keeping their sons healthy.
EurekAlert
11 Nov 22
More editors' picks