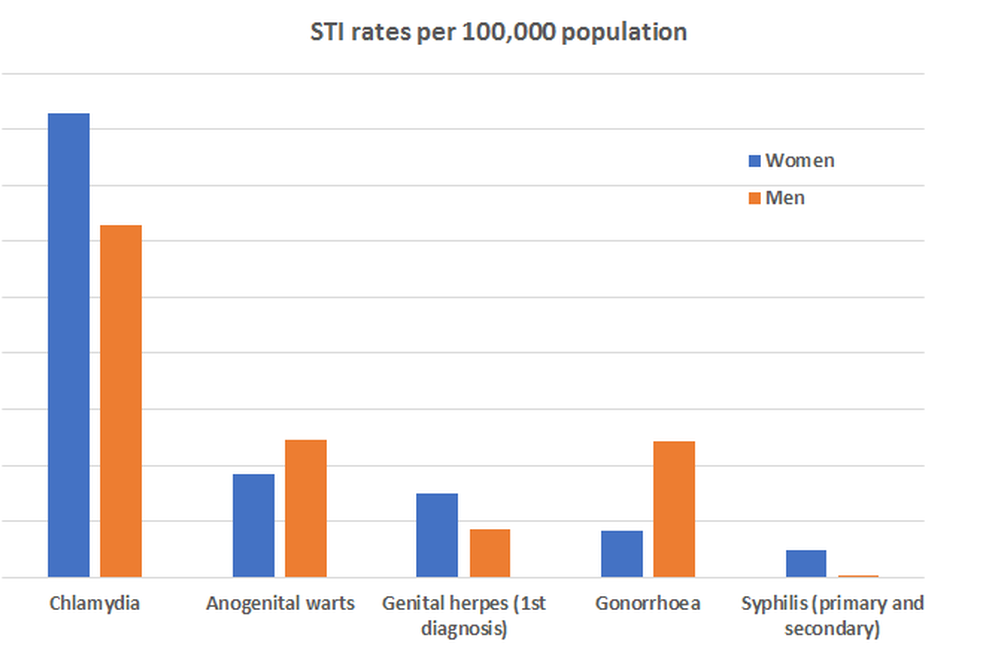 The latest sexually transmitted infections (STI) surveillance report from Public Health England (PHE) confirms that cases of the bacterial STIs gonorrhoea and syphilis have continued to rise in England.

Although the overall number of STI cases stayed roughly the same, cases of gonorrhoea increased by 22% and of syphilis by 20%. In gay men and other men who have sex with men (MSM), the increases in these two infections were of the same order, but chlamydia also increased by 17%. In the general population, chlamydia diagnoses stayed static, but this may partly be due to fewer chlamydia tests being done by the NHS.

Syphilis is overwhelmingly concentrated amongst MSM: 78% of the 7137 cases of primary and secondary syphilis and 852 cases of late syphilis were among gay men, even though only 12% of first attendances at STI clinics were MSM. This means syphilis is 6.5 times as common in MSM clinic attendees as it is in other attendees.

One slightly more positive fact, however, was that MSM were more likely to have syphilis diagnosed early, in primary, secondary or early latent infection, when it is more easily cured and less likely to have caused serious disease. The proportion of syphilis diagnosed in late stage, which needs longer and stronger treatment, was 23% in all clinic attendees but only 13% in MSM. Of more concern is that although only 12% of syphilis diagnoses were in women, 62% of those were diagnosed in late stage. Given that late syphilis may have been acquired years ago early diagnosis is a better guide to current incidence, as is the case with HIV.

Women are in the majority when it comes to overall sexual health service attendances: 55% of new patient appointments were in women and 62% of follow-up appointments. This is partly due to chlamydia screening since chlamydia is by some way the most common STI. Chlamydia in women was 4.5 times more likely to be diagnosed than the next most-common female STI, genital warts, and chlamydia in men 2.6 times as common as gonorrhoea or genital warts, which came second-equal for men.

One piece of good news is the historic decline in genital warts in young people, attributed to the introduction of the quadrivalent human papillomavirus (HPV) vaccine in 2012 in girls aged 12-18. Diagnoses in warts in young women aged 15-19 have halved since 2013 and have declined by 70% in young men of the same age, an example of ‘herd immunity’ as boys are not being vaccinated. There has also been a 12% decline in men aged 20-24, which numerically represents the same reduction in diagnoses as in the female teenagers (about 500 cases fewer in 2017 than 2013).

The benefits of HPV vaccination do not yet seem to be extending to MSM though, even though they are also eligible for the HPV vaccine (see diagram). There was no equivalent decline in cases in gay men overall or in any age group. This may be seen to support the vaccination of teenage boys as well as girls, as MSM are not benefiting from herd immunity. Alternatively, it may be too soon to see effects: last year just over 18,000 MSM received a first dose of the HPV vaccine compared with 6400 in 2016 and 441 in 2015.

In contrast with the increasing uptake of the HPV vaccination, vaccination for hepatitis B declined last year; 23,533 people received the first dose last year compared with 28,918 in 2016, and this is not entirely accounted for by an increase in the number of people found to be already immune to hepatitis B.

There was variation between ethnicities in STI diagnoses. People classed as black or of mixed race were more likely to be diagnosed with gonorrhoea and herpes than white people, and Asians less so. However, the PHE report notes that this only applies to people of Caribbean or mixed-race ethnicity, and not to Africans. Gonorrhoea, in particular, was three to four times as common in Afro-Caribbeans and those of mixed race as the general population.

There is a separate short report on the case of multi-drug-resistant gonorrhoea that attracted media attention this March. The distinguishing feature of this case was that previous UK cases of ‘super-gonorrhoea’, reported from Leeds in 2016, though resistant to the antibiotic azithromycin, were still susceptible to ceftriaxone, the second one used in standard treatment. In this case, although phenotypic tests indicated ceftriaxone should still work, it did not.

The case was a single one of a heterosexual man who apparently caught the infection in Thailand. It was eventually cured by using ertapenem, a rarely-used antibiotic of the carbapenem class. No further infections have occurred in the UK and efforts are going to trace his contact in Thailand.

The PHE report also details other services provided by STI clinics as well as treatment. One is post-exposure prophylaxis (PEP) for HIV: last year a total of 13,429 courses of PEP were prescribed, 73% of them for gay men. PEP prescriptions have doubled both among MSM and in general since 2013.

Limited testing during periods of Covid-19 restrictions may have created some level of ‘pent up’ demand, HIV group says.
The Irish Times
15 Jul 22
More editors' picks