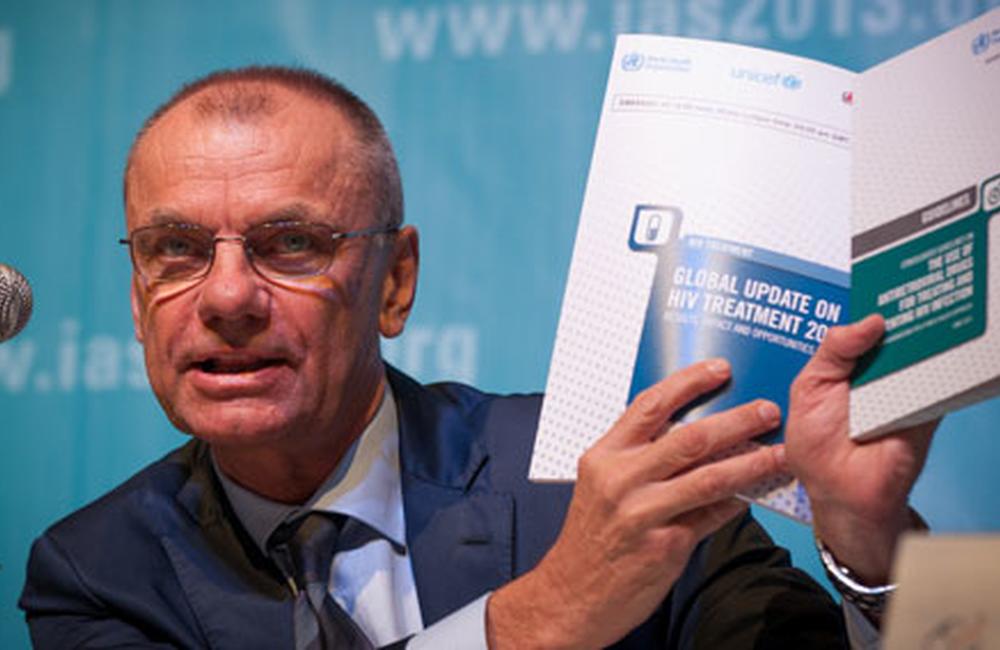 Gottfried Hirnschall from the WHO at the press conference for the new WHO guidelines. Photo ©International AIDS Society/Steve Forrest/Workers' Photos
This article is more than 10 years old. Click here for more recent articles on this topic

According to the WHO, initiation of antiretroviral therapy at a CD4 count below 500 could avert an additional 3 million deaths and prevent 3.5 million more new HIV infections between 2013 and 2025 if the guidance is widely implemented. Although the earlier treatment initiation recommendations follow systematic reviews which show that this is the best threshold at which to initiate ARVs, the vast majority of people initiating ARVs globally are doing so at a CD4 count below 100 cells/mm3.

However, the WHO estimates that as a result of the new guidance 25.9 million people will now be eligible for ARVs. An additional 9.2 million people have become eligible compared to the criteria used in the previous 2010 guidance.

“With these new guidelines our collective goal should now be to scale up without messing up: to reach more people, retain them on treatment, and with an undetectable viral load.” Dr Gilles van Cutsem, MSF

The previous WHO recommendation, set in 2010, was to offer treatment at a CD4 count of 350 or below. Ninety per cent of all countries have adopted the 2010 recommendation. A few countries, such as Algeria, Argentina and Brazil, are already offering treatment at 500 cells/mm3.

Evidence from the HTPN 052 study found that initiating ARVs at CD4 counts between 350 and 550 reduced the risk of HIV transmission in heterosexual serodiscordant couples by 96%. There is also evidence that earlier treatment will help people with HIV to live longer, healthier lives.

Other key new recommendations include the use of viral load testing as the preferred approach to monitoring the success of ART and diagnosing treatment failure, in addition to clinical and CD4 monitoring of people receiving ART (as opposed to CD4 testing) and community-based HIV testing and counselling and HIV testing of adolescents to diagnose people with HIV earlier and link them to care and treatment.

“There’s no greater motivating factor for people to stick to their HIV treatment than knowing the virus is ‘undetectable’ in their blood,” said Dr Gilles van Cutsem, Médecins Sans Frontières/Doctors Without Borders (MSF)’s Medical Co-ordinator in South Africa.

“Viral load testing is the optimal way of maintaining people on first-line treatment and knowing when to switch them to second-line drugs, so it’s high time it’s made available in countries with a heavy burden of disease,” he went on. “With these new guidelines our collective goal should now be to scale up without messing up: to reach more people, retain them on treatment, and with an undetectable viral load.”

The new guidelines also recommend antiretroviral therapy to all children with HIV under 5 years of age and to all children over the age of five with a CD4 cell count below 500.

Women with HIV who are pregnant or breastfeeding are recommended to start treatment irrespective of CD4 cell count. Although the guidelines state that women may discontinue treatment after breastfeeding has ceased if they are not eligible for treatment, WHO also recommends that because it is simpler to manage, all women should stay on treatment once they have started.

The new guidelines also recommend antiretroviral therapy for all people living with HIV who are part of a serodiscordant couple (this refers to two people in a sexual relationship where one partner has HIV and the other does not, sometimes also called 'mixed status').

WHO continues to recommend that all people with HIV with active tuberculosis (TB) or with hepatitis B receive antiretroviral therapy. The new guidelines also support the active acceleration of the phasing out of d4T (stavudine, Zerit) in first-line ART regimens for adults and adolescents.

The Consolidated guidelines on the use of antiretroviral drugs for treating and preventing HIV infection recommend that all adults should be offered tenofovir (TDF, Viread), 3TC (lamivudine, Epivir) or FTC (emtricitabine, Emtriva) and efavirenz (Sustiva or Stocrin), preferably in a fixed-dose combination. This combination is easier to take and safer than alternative combinations previously recommended and can be used in adults, pregnant women, adolescents and older children.

However, healthcare workers and people with HIV at the conference found this recommendation problematic as the package insert of efavirenz still states that it should not be used in pregnant women during the first trimester, resulting in some pregnant women not adhering to their treatment. “We need the WHO to address this before they make recommendations such as these,” said one conference delegate.

The consolidated guidelines also recommend the implementation of community-based HIV counselling and testing (HCT) in generalised epidemics, especially for those most at risk of HIV such as men who have sex with men (MSM), people who inject drugs (PWID), migrants and sex workers. WHO also recommended the minimisation of out-of-pocket payments for health care, peer support for patients, the use of mobile phone text messages to promote adherence and retention in care and nutritional support in places where there is food insecurity.

The Joint United Nations Programme on HIV/AIDS (UNAIDS) estimates that the increase in the number of people treated as a result of these recommendations could be met within the projected 2015 global budget of USD 22 to 24 billion for HIV treatment and care. The increase in numbers treated could be accommodated by reducing the cost of medicines, simplifying drug delivery systems. Furthermore, UNAIDS notes that the expansion in numbers treated will result in a decrease in the resources needed in the long term in order to treat HIV co-morbidities and meet the cost of hospitalising people with HIV who become severely ill. UNAIDS estimates that full implementation of the new guidelines would result in 19 million new HIV infections and 13.5 million deaths averted by 2025.

A new report from UNAIDS, the WHO and The United Nations Children's Fund (UNICEF), Global update on HIV treatment 2013: results, impact and opportunities, shows a huge acceleration in the roll-out and uptake of antiretroviral therapy since 2011. A record 9.7 million people living with HIV were accessing treatment in 2012 compared to just over 8.1 million in 2011 – an increase of 1.6 million in one year alone. The number of children younger than 15 years receiving ART in low- and middle-income countries increased  from 566,000 in 2011 to 630,000 in 2012, but the increase was substantially less than for adults at only 5%. This is a common trend in countries such as Zimbabwe where universal access has been achieved for adults at 85%, but coverage is only 42% in children.

“These new guidelines and the global progress of HIV treatment and care have implications beyond HIV – it shows that if we commit to targets and take all efforts to meet them, we can curb an epidemic. This approach can be adapted to other diseases and health issues”, said Dr Hiroki Nakatani, the deputy-Director General of the WHO, who officially launched the new HIV guidelines.

Advocacy groups representing people living with HIV welcomed the new guidelines but also expressed some concerns about how they will be implemented.

The AIDS and Rights Alliance of Southern Africa (ARASA), Asia Pacific Network of People Living with HIV/AIDS (APN+) and the International Treatment Preparedness Coalition (ITPC) stressed that while they are excited to see greater emphasis on the investment in point-of-care CD4 count tools and viral load tests, “We demand from governments and the international community to ensure greater investments are made in health systems for this to happen,” said the group in a statement about the new guidelines.

"We encourage diagnostic developers to work with communities to expedite the process of making these diagnostics available and affordable,” they said.

But they also highlighted existing disparities in access to treatment and questioned whether new guidelines alone will be enough to address these problems.

"Enormous new political and financial commitments from both national governments and the international community are urgently needed." ARASA, APN+, ITPC

In the light of 30% treatment coverage in west and central Africa on the standards set by the 2010 WHO guidelines and very low treatment coverage among people who inject drugs in eastern Europe and central Asia, “it is hard to imagine how an additional 7 million people will be accessing treatment on the basis of the new guidelines,” the groups warned. "For this to happen, enormous new political and financial commitments from both national governments and the international community are urgently needed."

The International HIV/AIDS Alliance, the Global Network of People Living with HIV (GNP+) and Stop AIDS Now! welcomed the new recommendations, but warned, “Governments and donors must ensure strategic investments that support and scale-up effective community-based interventions – such as peer outreach workers, community-based testing, treatment literacy projects, community advocacy – that improve people’s ability to know their HIV status, and to access quality treatment and care that they need to stay healthy.”

World Health Organization Consolidated guidelines on the use of antiretroviral drugs for treating and preventing HIV infection. June 2013. Available online at: http://www.who.int/hiv/pub/guidelines/arv2013/download/en/index.html

Press release from WHO: WHO issues new HIV recommendations calling for earlier treatment.