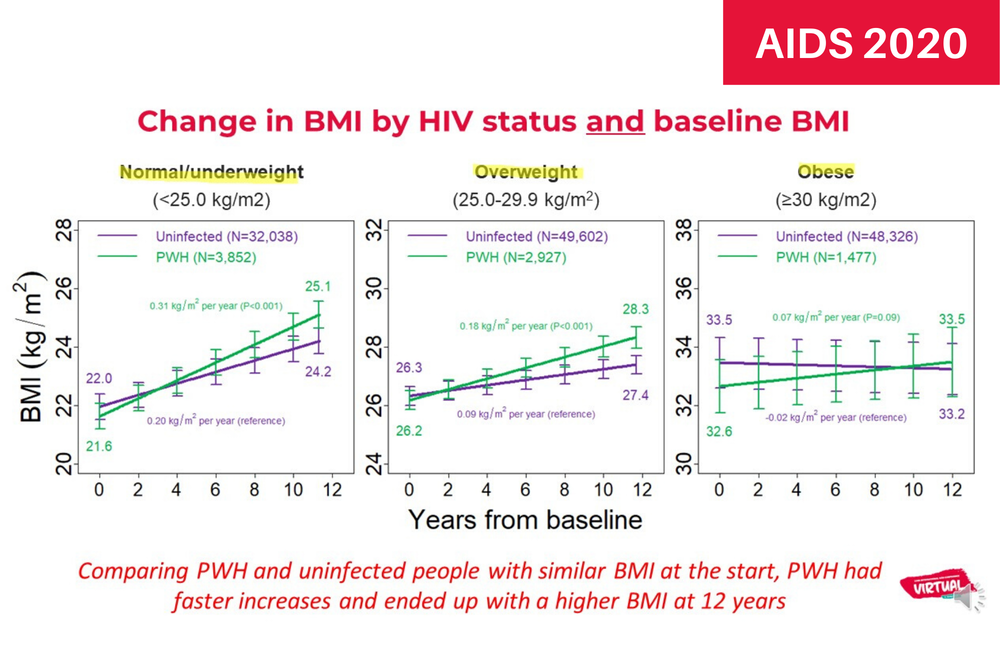 People with HIV on antiretroviral treatment gain weight faster than HIV-negative people of a similar age, regardless of baseline weight, a large study of people receiving treatment through the Kaiser Permanente healthcare system in the United States shows.

Weight gain on antiretroviral treatment has been observed in numerous cohorts but it is unclear what rate of weight gain can be expected, how it compares with weight changes over time in HIV-negative people, and whether it is influenced by pre-existing body weight or other factors.

Specific antiretroviral drugs including integrase inhibitors and tenofovir alafenamide have been identified as potential causes, but analysis of clinical trials shows that a low CD4 cell count prior to starting treatment is the strongest predictor of weight gain after starting treatment.

To assess the rate of weight gain in people with HIV on antiretroviral therapy compared to HIV-negative people of the same age and sex, Silverberg and colleagues used the large Kaiser Permanente database of people receiving care in California, Virginia, Maryland and Washington DC.

They matched each person with HIV starting antiretroviral therapy between 2006 and 2016 with ten HIV-negative people by age, sex, race/ethnicity, clinic and year. People without baseline body mass index measurements were excluded from the analysis. As this analysis is a comparison between HIV-positive and HIV-negative people, it does not consider the impact of HIV-specific factors such as time on treatment or regimen.

The primary outcomes measured were changes in body mass index (BMI) over time by HIV status and according to baseline BMI, to detect differences in the evolution of weight by HIV status and by pre-existing body weight. The mixed-effects model of weight change included confounding factors that might affect weight including age, race/ethnicity, sex, year, substance use disorders, smoking, education, income, insurance type, and common co-morbidities.

The study population consisted of 8256 people with HIV and 129,966 HIV-negative controls. The HIV-positive population had a median age of 41 years, 88% were male, 36% white, 26% black, 26% Latinx and 6% Asian/Pacific Islander. Eleven per cent had an alcohol use disorder and 16% a substance use disorder at baseline.

The rate of weight gain was significantly greater in people with HIV than HIV-negative people for all baseline weight categories apart from obese people.

The study couldn’t take into account effects of diet or exercise and the findings have limited applicability to women owing to the small proportion in the Kaiser cohort, Silverberg said.

He stressed that the findings show that people with HIV are gaining weight more rapidly than others and this weight gain will exacerbate the risk of co-morbidities already more common in people with HIV, especially cardiovascular disease. Although people with HIV were catching up with HIV-negative counterparts in body weight during the study period, longer follow-up is needed to show whether weight gain continues at the same pace.