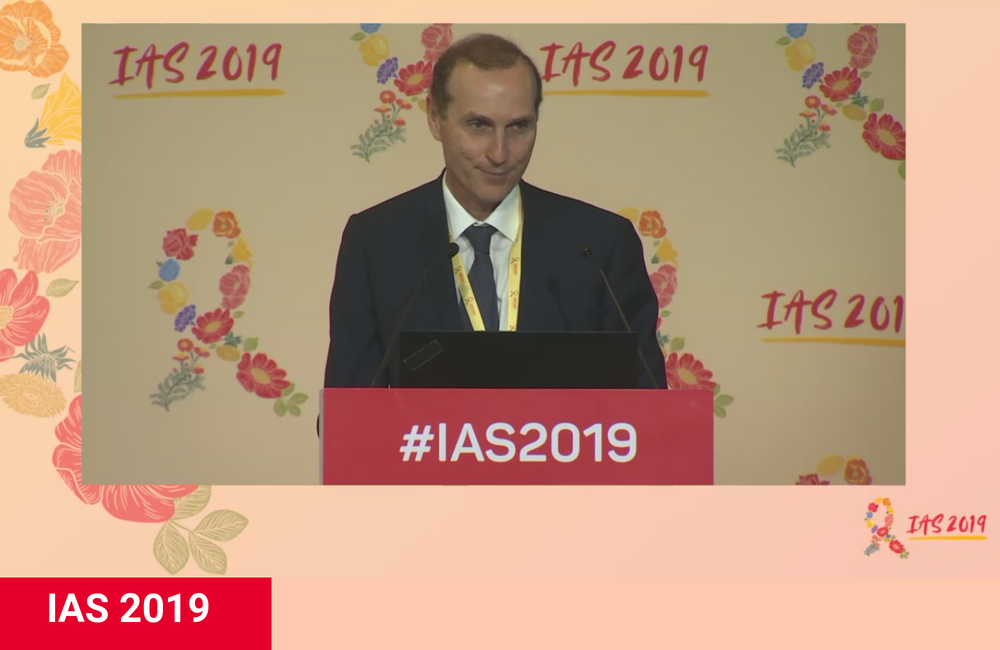 Image from the livestream of Jean-Michel Molina at IAS 2019.

This dual combination at the optimal dose suppressed viral load as well as a three-drug regimen of doravirine, tenofovir disoproxil fumarate (TDF) and lamivudine, which comprise the Delstrigo single-tablet regimen.

Islatravir, formerly known as MK-8591 or EFdA, is a first-in-class nucleoside reverse transcriptase translocation inhibitor with multiple mechanisms of action. It not only halts construction of new DNA chains by acting as a defective building block, it also works at a later step in the process, making it active against HIV with resistance mutations. Prior studies showed that islatravir has more than 10-fold greater potency than other approved antiretrovirals, is active at low doses and has a long half-life in the body.

Dr Jean-Michel Molina of the University of Paris presented findings from a phase IIb study evaluating the safety and efficacy of islatravir plus doravirine versus Delstrigo.

This randomised, double-blind trial enrolled 121 previously untreated people with no known antiretroviral resistance. More than 90% were men, three-quarters were white and the median age was 28 years. About a quarter had a viral load above 100,000 copies/ml at baseline. People with active hepatitis B or C co-infection were excluded.

During part one of the study, lasting 24 weeks, participants were randomly assigned to receive one of three doses of islatravir (0.25mg, 0.75mg or 2.25mg) plus doravirine and lamivudine, or Delstrigo. During part two, those who achieved an undetectable viral load (below 50 copies/ml) on the three-drug combination dropped lamivudine and stayed on islatravir and doravirine as a two-drug regimen through week 48. Some people who had slower viral suppression remained longer on three-drug therapy.

At 48 weeks, 89.7%, 90.0% and 77.4% of people taking the respective islatravir doses maintained viral suppression, as did 83.9% of those on Delstrigo. A very small number of people in any study arm experienced virological failure. Those who did had low-level viral loads between 50 and 80 copies/ml, and none met the criteria for resistance testing.

"Results demonstrate that islatravir plus doravirine has the potential to be a potent two-drug regimen and supports further study in phase III," the researchers concluded.

"These results provide evidence for the antiviral properties of islatravir in combination with doravirine as a potential once-daily dual regimen for people living with HIV-1," Molina said. "There is a continuing need for additional efficacious therapeutic regimens for the treatment of people living with HIV-1, and islatravir warrants further study."

Merck indicated that it plans to embark on phase III trials of the islatravir plus doravirine combination in diverse patient populations. Islatravir alone is also being evaluated in a long-acting implant for pre-exposure prophylaxis (PrEP). Another study presented at the conference showed that it was safe and can potentially maintain protective drug levels for more than a year.