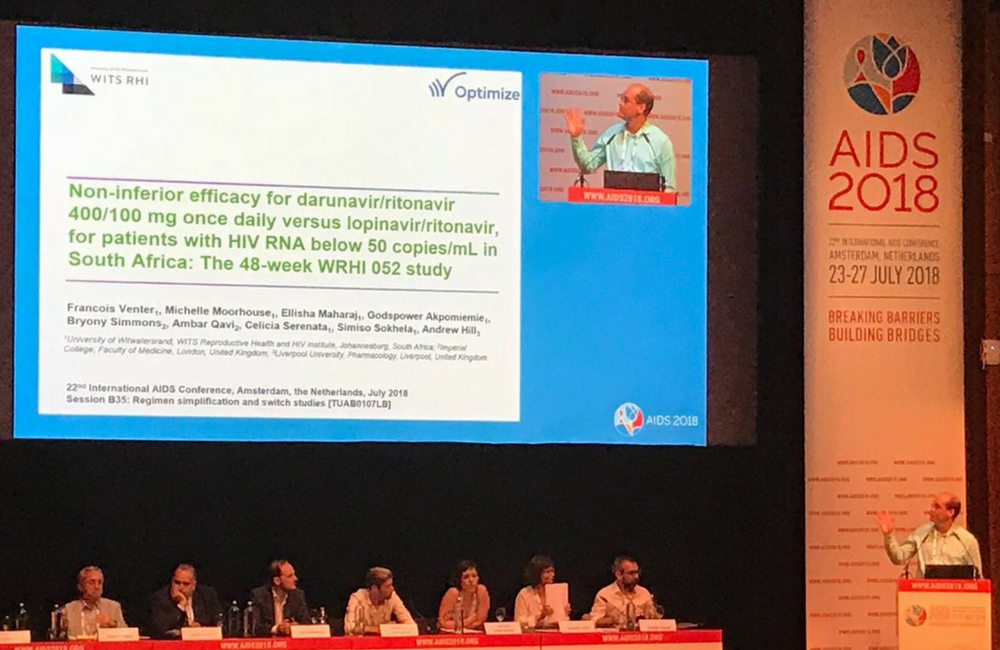 A daily dose of the boosted protease inhibitor darunavir/ritonavir 400/100mg is at least as effective as therapy with lopinavir/ritonavir for people switching treatment while virally suppressed, according to South African research presented to the 22nd International AIDS Conference (AIDS 2018) in Amsterdam. The darunavir dose was cut by half without any reduction in virological efficacy and investigators suggest the benefits of this reduced dose could include fewer side-effects and lower cost.

Partly because of its high cost, darunavir/ritonavir is rarely used in sub-Saharan Africa. But results from small studies suggest that a daily dose of 400mg with a 100mg ritonavir booster has equivalent potency and efficacy to the standard dose. Halving the daily dose could make darunavir a more affordable option in resource-limited settings.

A team of South African investigators therefore designed a study to evaluate the efficacy and safety of darunavir/ritonavir 400/100mg as a switch option.

The study was open-label and recruited 300 people receiving care in Johannesburg. Follow-up lasted 48 weeks. The patients took their protease inhibitor in combination with two NRTIs. The main outcome was viral suppression at week 48 and the study was statistically powered to see if the reduced dose darunavir/ritonavir dose was non-inferior to lopinavir/ritonavir (a difference of no more than -4% in the proportion of patients with a viral load below 50 copies/ml). Treatment discontinuation for any reason also counted as failure.

The participants had a median age of 42 years and two-thirds were female. Almost all had an undetectable viral load at baseline when median CD4 cell count was 630 cells/mm3.

Retention in care was excellent, with 95% of people randomised to darunavir/ritonavir and 96% of individuals who remained on lopinavir/ritonavir completing the 48 weeks of the study.

Reasons for the discontinuation of therapy were similar for the two treatments. Only 1% stopped because of side-effects.

Laboratory abnormalities were extremely rare in both study arms.