PrEP use linked to fewer new HIV infections in US states 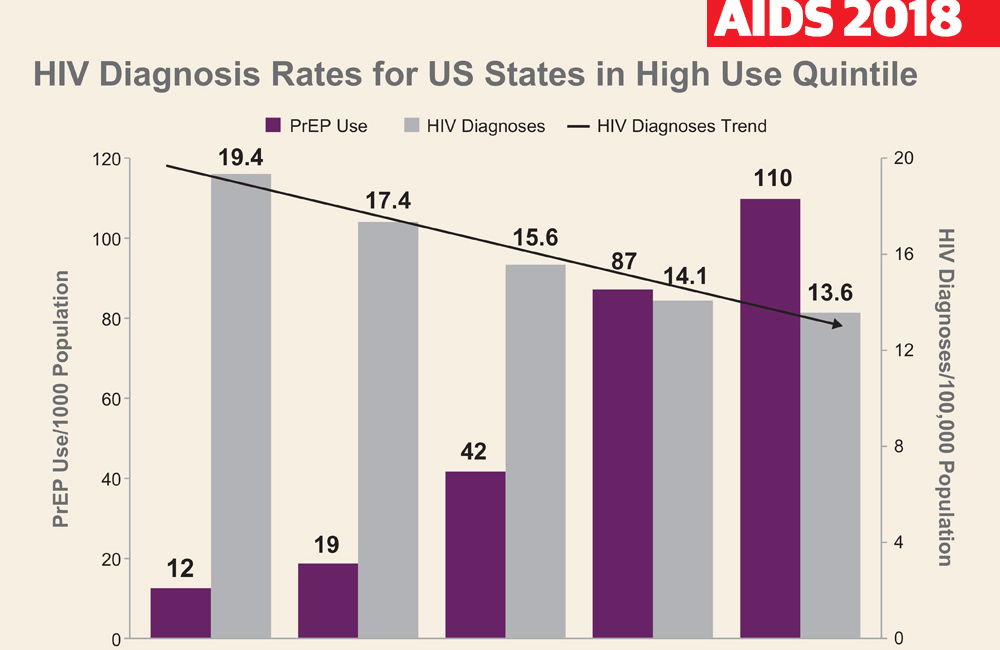 As pre-exposure prophylaxis (PrEP) use continues to grow, epidemiological evidence is starting to show an association between increases in PrEP uptake and declines in new infections.

A new analysis presented this week at the 22nd International AIDS Conference (AIDS 2018) in Amsterdam shows a correlation between higher PrEP use and lower HIV incidence in US states.

The US Food and Drug Administration (FDA) approved Truvada (tenofovir/emtricitabine) for HIV prevention in July 2012. PrEP use has risen steadily since then, especially among white gay and bisexual men in major cities, but it has been difficult to determine the total number or demographic characteristics of PrEP users because these data are not centrally collected.

For the past several years Gilead Sciences, the maker of Truvada, has been reporting PrEP use estimates based on surveys of commercial pharmacies. At the 2017 International AIDS Society Conference on HIV Science, Gilead researchers reported that an estimated 120,000 people had ever started Truvada for PrEP from its debut in 2012 through early 2017. Gilead then teamed up with researchers at Emory University's Rollins School of Public Health, who reported at this year's Conference on Retroviruses and Opportunistic Infections that just over 77,000 people were taking PrEP in 2016 alone.

But PrEP is still only reaching a small proportion of those who might benefit. The US Centers for Disease Control and Prevention (CDC) estimates that less than 10% of the 1.2 million people at substantial risk for HIV infection are using PrEP.

So is this increase in PrEP use leading to a decrease in new HIV infections?

Trends in new infections suggest this may be the case. In San Francisco, where the city's large gay community adopted PrEP early on, new infections fell to their lowest-ever level in 2016. But the city's early adoption of universal antiretroviral therapy immediately after HIV diagnosis makes it difficult to tease out the effects of PrEP versus 'treatment as prevention'.

Likewise, a dramatic recent decline in new infections among gay men attending sexual health clinics in London – representing a very high-risk population – and a large decrease among men who have sex with men in Sydney have also been attributed to a combination of approaches including stepped up testing, treatment and PrEP.

In the latest analysis, reported as a late-breaking poster, Patrick Sullivan from Emory University and colleagues from Gilead and the CDC looked at correlations between PrEP use and HIV diagnosis rates, using data from people aged 13 and older in all 50 US states and Washington, DC, between 2012 and 2016. PrEP usage data came from pharmacies and diagnosis data from the National HIV Surveillance System.

The researchers divided the states into quintiles, or fifths, according to the proportion of people with a potential indication for PrEP who were receiving it. In the top quintile 11.0% of eligible individuals were on PrEP in 2016, compared with 3.5% in the lowest fifth. They noted that these figures represent a minimum level of PrEP use, as some people obtain PrEP from sources other than surveyed pharmacies.

But some notable differences were seen in relation to PrEP use, the researchers reported. New HIV diagnoses declined by -4.7% in the quintile of states with the highest PrEP use and by -0.94% in the medium-high group in an unadjusted analysis. In contrast, diagnoses increased in the quintile with the lowest PrEP use (+0.9%) and medium-low use (+1.53%).

In an attempt to tease out the effect of PrEP versus treatment as prevention, the researchers also looked at viral load data from 37 states and DC. In this sub-analysis, the rate of PrEP use remained significantly associated with declines in new HIV diagnoses after controlling for state levels of viral suppression.

"PrEP uptake was significantly associated with declines in HIV diagnoses in the USA, and this association is independent of levels of viral suppression," the researchers concluded. They recommended that "US states should take steps to increase the use of PrEP among persons with indications and should continue efforts to increase HIV viral suppression for people living with HIV."

"By documenting significant declines in average new cases of HIV in states where Truvada for PrEP has been most widely adopted, our analysis emphasizes the importance of improving access to HIV screening and a full range of prevention tools, including PrEP, in US states," Sullivan added in a Gilead press release.