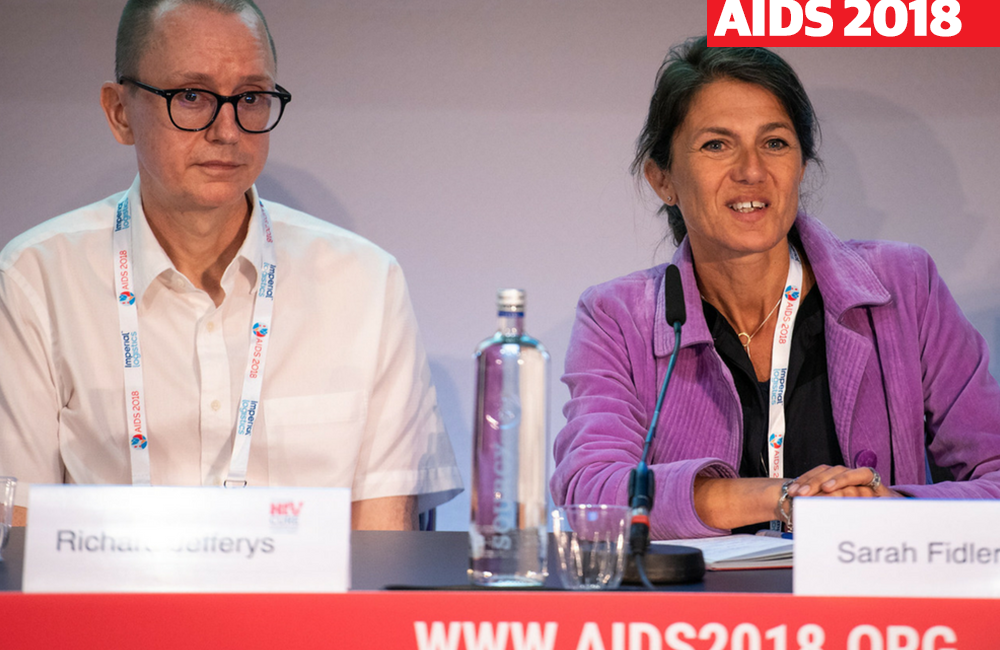 One study whose results were eagerly awaited at the 22nd International AIDS Conference (AIDS 2018) was the RIVER study. This was the first study to add to standard HIV therapy a vaccine-plus-drug regimen intended to reduce the number of dormant immune-system cells that harbour HIV. A therapy that could produce significant enough reductions in this so-called 'reservoir' could produce a remission or cure of HIV infection.

In short, RIVER did not produce the result hoped for: it did not reduce the amount of cells in the body containing HIV genes. It did stimulate an anti-HIV response, and it did cause some of the cells containing HIV to become active and therefore in theory ‘visible’ to the immune system, but those two effects did not link up to kill off HIV-infected cells.

RIVER is a study run by CHERUB, a HIV cure research collaboration run by the UK National Institute of Health Research at its centres in Oxford, Cambridge and London.

The HIV DNA (genes) in the so-called reservoir cells are what makes infection incurable: because they are stored life-long, HIV disease re-starts as soon as you stop HIV therapy, which blocks their activity.

Principal investigator Sarah Fidler told the conference that SPARTAC, a study conducted from 2004-2010, was one of the first to look at whether starting HIV therapy soon after infection might enable early-treated people to stop antiretroviral therapy (ART) later. It found that while it only took four weeks on average for people with average to high levels of HIV DNA integrated into their cells to develop a detectable HIV viral load when taken off therapy, it took 12 weeks in people with low levels of DNA. Ten per cent of people in SPARTAC with low DNA maintained undetectable viral loads off treatment for over a year. There was therefore good reason to investigate ways of reducing the amount of HIV DNA in the body still further.

One of the strategies researchers have been considering as a pathway towards a complete cure has been the so-called ‘kick and kill’ strategy. The hypothesis behind this is that it’s the invisibility of the reservoir cells that is the problem; if they were active and became visible to the immune system, it would start to pick them off, and the reservoir of HIV DNA would start to shrink.

The hope is that once the reservoir shrinks sufficiently, people might be able to stop ART for a long time or even permanently without HIV reappearing.

RIVER recruited people who were diagnosed and started ART within the first few weeks of HIV infection, and who were therefore likely to have a smaller number of cells containing HIV DNA.

Sixty people, all male, and all but five gay men, were recruited, with an average age of 32. They all had recent infection and early treatment, with an average length of time of 28 weeks between HIV infection and entering RIVER. They had an estimated maximum length interval of 16 weeks between HIV infection and diagnosis, so a minimum time on ART of 12 weeks before entering the study. Their average CD4 count was 708 cells/mm3 and all but one had a viral load below 50 copies/ml at randomisation.

They were randomised to continue on ART alone or take ART plus the ‘kick’ and ‘kill’ therapies. As these consisted of a vaccine followed by the gene stimulating drug vorinostat, this was called the ARTVV arm.

RIVER gave the ‘kill’ part of ARTVV first: it administered a vaccine designed to amplify and broaden the immune system’s natural reaction to HIV. This makes sense, as you need a vigilant immune response already in place to recognise the woken-up virus.

It gave people two vaccine shots, one at randomisation and one eight weeks later. The vaccine was a so-called vector vaccine: it consisted of parts of the HIV genetic code that are particularly ‘conserved’, i.e. which are essential to the virus, vary little from type to type and do not change over time, wrapped up in the shells of two different viruses, an adenovirus at week zero and a vaccinia virus at week eight. See this report on the APPROACH vaccine study for more on vectors.

The ‘kick’ part of the study was then given: the drug vorinostat (Zolinza) was given as one dose every three days for the next 30 days after week eight. Vorinostat is an HDAC (histone deacetylase) inhibitor: what this means is that it loosens DNA strands inside cells and enables inactive genes, including ones that activate immune-system cells, to switch back on, so the cells become active again.

The theory was that the newly active infected cells would start assembling the cellular machinery to make more HIV, and that this would get noticed by the immune system that had been primed by the vaccine. The cells would be killed, and the reservoir of HIV DNA purged. There should be little danger of active HIV therapy developing though, as all RIVER patients remained on ART.

The primary outcome was that there was no decrease in HIV DNA in people given the ARTVV regimen. There was a decrease in DNA between diagnosis and starting RIVER, due to patients being put on ART, but absolutely no change thereafter, and no difference between people on ART alone and people on ARTVV. There was also no difference in the amount of new HIV viruses produced by people’s cells in the lab dish.

The ARTVV regimen did have some effects. It boosted the number of HIV-specific CD4 cells nearly tenfold, and CD8 cells to a lesser degree. The CD8 cells of patients given ARTVV was preserved at pre-ART levels, meaning that the vaccine did create what could be a useful immune response in other circumstances. The vorinostat also produced a measurable increase in HIV gene expression, though tests are ongoing to find out what the effects of this were.

However, the lesson from RIVER is that the effects of the two therapies did not combine to produce a decline in cells containing HIV DNA.

“The study has shown,” said Sarah Fidler, “that this particular set of treatments together didn’t add up to a potential cure for HIV.”

In a press release, co-principal investigator John Frater said: “We need to think about why we didn’t see an effect. It is possible that vorinostat was not quite potent enough to wake up as much HIV as was needed, or that a different sort of immune response to the one we induced is needed to target the HIV reservoir.”

Sarah Fidler, at the conference, contrasted the results with an unrandomised study presented in 2017, BCN002, which gave subjects two therapeutic vaccines plus a different genetic stimulant, romidepsin. In this study, 38% of participants were able to maintain undetectable or low viral loads for months after being taken off ART. However, because this was unrandomised it’s not clear whether this was due to the treatment regimen, or simply because they received ART soon after HIV infection. There are no plans to take participants in RIVER off ART.

“They take time off work, they come for lots of visits and tests, and they are an amazingly committed group of people,” she said.

Damian Kelly, RIVER’s community advisory board leader, said: “RIVER had outstanding commitment from participants because people want to see an HIV cure happen. These results will help to direct and inform the design of future trials and move us closer towards the goal of a cure.”

Fidler S et al. Antiretroviral therapy alone versus antiretroviral therapy with a kick and kill approach, on measures of the HIV reservoir in participants with recent HIV infection (the RIVER trial): a phase 2, randomised trial. The Lancet, online ahead of print, February 2020.