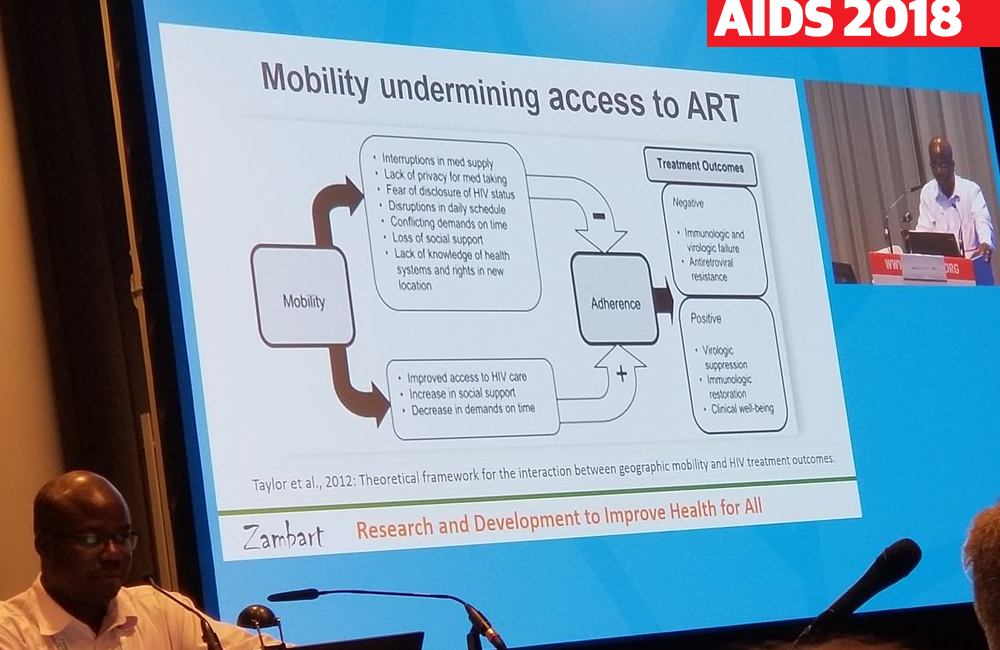 Health facilities must be responsive to the needs of mobile individuals and of migrants if they are to retain people in care, Bwalya Chiti of Zambart told the 22nd International AIDS Conference (AIDS 2018) in Amsterdam yesterday. Lifelong engagement with care is required for good individual and public health outcomes, but the rigidity of many health services in African countries is a barrier.

“It is crucial to integrate the dimension of mobility and migrations into our responses to the HIV epidemics,” Joseph Larmarange of the Centre Population et Développement (CEPED) said at the same session. If health is seen as a human right, this must apply to mobile and migrant populations too.

Larmarange is one of the social scientists who have been working in the settings of ‘universal test and treat’ studies in African countries, in order to understand the social context and social impact of these interventions. Mobility and migration has emerged as a key theme – the reality of many people’s lives is that people often need to travel in order to create or find work. Examples include women selling vegetables 100km from their home, street vendors in peri-urban settings, construction workers travelling to urban areas, cross-border traders and people working in domestic service in a neighbouring country.

Movement within countries and between different parts of Africa is much more common than migration to Europe. Rural-urban migration is not the only practice: circulation between rural areas, towns and the rural perimeters of cities is common.

The forms of livelihood that people are able to look for are highly gendered, with women tending to travel shorter distances and for shorter periods of time. While male migrant workers are frequently described as having sexual risk behaviour that impacts on their partners back home, an analysis from the SEARCH study in Kenya and Uganda found that concurrent sexual relationships were more strongly associated with mobility in women than in men.

In KwaZulu Natal, the ANRS 12249 Antiretroviral Treatment as Prevention trial offered HIV treatment regardless of CD4 count. Repeated household surveys showed that individuals with HIV who had recently arrived in the area and people who subsequently left were less likely to be retained in care or to be taking HIV treatment. So it appears that the movement of people in and out of communities slowed down efforts to increase treatment coverage and population viral suppression. This is one factor that may explain this study’s failure to show a reduction in HIV incidence at population level.

In countries where welfare and social protection systems usually do not exist, people’s reasons for mobility are primarily to raise money for household basic needs such as food, shelter, children’s schooling and other social obligations. People are forced to make difficult choices between accessing medical care and sustaining their livelihoods. Frequently, people prioritise providing for their households and their dependents over their own health – they delay, miss or stop taking treatment.

Bwalya Chiti pointed out that the clinic system usually requires people living with HIV to collect their medication on a routine basis from the same location. They usually need to attend once a month, within normal working hours, and a visit can take a full day.

However, mobility creates discontinuities: an individual may be too busy to attend the clinic or may never be home during clinic opening hours. He or she may move temporarily to an area that does not have a clinic that dispenses antiretrovirals. In a new area, the individual may lack knowledge of the health facilities and how the health system works there. There may be bureaucratic barriers to obtaining medication from a facility in the new area, without registering as a new patient.

When individuals miss appointments, they are often reprimanded by staff. This discourages people from remaining engaged with care and contributes to further movement of patients between services. People may seek care elsewhere to avoid being made to feel guilty by healthcare workers.

Chiti argued people living with HIV need to be involved in decisions about service design. There should be a collaborative process to develop more flexible services. Clinic hours should be adjusted to allow people to attend in the evening or at the weekend.

Staff should be trained to be more sensitive to patients’ needs concerning mobility. They should ask patients about travel plans and provide medication refills that will cover the whole period the patient is away. Patients should be given cards with full details of their medication, be educated on which drugs they are taking and be given details of alternative facilities, in case they run out of drugs.

Better means of information sharing for healthcare providers, both within a country and across borders, need to be developed. Audience members suggested that one possibility may be for patients to carry their own health record on their phone. At a more basic level, clinics need to be willing to take simple steps, such as to phone a person’s usual clinic to check details of their prescription.

Joseph Larmarange commented that whereas the solutions in relation to short-term mobility seem fairly clear, it was less obvious how to adapt services for migrants who cross borders.

During discussion, Ria Reis of the University of Amsterdam noted that these issues are not unique to HIV, but are seen in relation to all chronic health conditions. She suggested forming alliances with people working on non-communicable diseases, including community representatives, providers and academics.

View details of this conference session on the AIDS 2018 website.

Chiti and Larmarange were speaking at a satellite meeting to launch a special issue of the Journal of the International AIDS Society: Population mobility: challenges for universal HIV testing and treatment. All articles are freely available online.